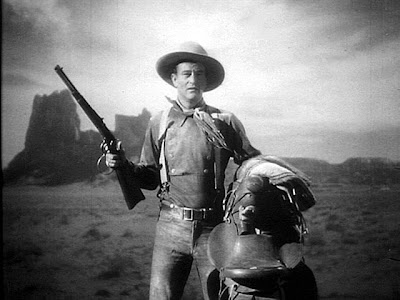 Consider for a moment Noah’s Ark. I don’t care if you’re a strict fundamentalist (and if you are, you probably aren’t reading my blog in the first place) or if you find it a disturbing piece of Jehovah fan fiction. For just a moment, consider the story. Noah takes a motley assortment of critters onto a big boat, and then the boat sails through treacherous waters to arrive safely at the end. Noah’s Ark is a good metaphor for a particular type of movie. Put a bunch of very different people on or in the same vehicle and send them on their way. If things get boring, add some problems.

And thus we have John Ford’s Stagecoach, where the mode of conveyance is, of course, a stagecoach driving over and over through the same valley (really) through Apache country. There are soldiers, conflicts, rampaging natives, chases, the birth of a child, moral superiority, close calls, and a cavalry charge to save the day. If you’re wondering where a lot of the conventions in Westerns came from, you need look no further.

Essentially, we have a stagecoach leaving one town and headed for another. The locations and names of the towns aren’t important. Thrown onto the stage we have a motley assortment of Old Time West-y folks who have many, many reasons to dislike each other intently. Naturally, this means that they’ll be travelling together in close quarters. Inside the coach, we have Dallas (Claire Trevor), a woman of fallen moral character, who is being run out of town by the decency league of morally upright women. Going with her is the drunken town doctor (Thomas Mitchell), being kicked out for his own moral failings.

We’ve also got one of those morally upright (and uptight) women (Louise Platt), who is married to a soldier at a nearby fort. She’s pregnant, although no one knows this at first. We have the perpetually afraid and nervous whiskey salesman, Peacock (Donald Meek) who would much rather turn around than plow through dangerous territory. A bank manager named Gatewood (Berton Churchill) is desperate to leave town because he’s stealing $50,000 in payroll from the Western Union. We also have a slick gambler (John Carradine) who claims to be going for the protection of the women.

On top of the stage we have Buck (Andy Devine) and Curley (George Bancroft), who happens to be the sheriff. He’s going because a dangerous criminal named the Ringo Kid (John Wayne) happens to have broken out of prison and Curley is anxious to bring him back in. Ringo is looking for some payback on a man named Luke Plummer, and he broke out of jail to get it. It’s evident that both Buck and Curley like the Kid, but Curley has a job to do as the sheriff, and he’s going to do it. The coach encounters the Kid just as it leaves town, and the Kid hops a ride, since the eventual goal of the coach is to get to the town where Luke Plummer is waiting.

It’s easy to look at this film and assume that John Wayne’s character is the center because these days, he’s easily the most famous and well known face in the bunch (although it was Mitchell who won an Oscar for his role, and he’s incredibly familiar as the uncle in It’s a Wonderful Life). That’s a mistake, though. While Wayne’s character is important to the overall narrative, each of the characters on and around the stagecoach has his or her important role to play. Those who start in the positions of moral and social authority—the pregnant woman, the gambler, and the bank manager—end up fallen in some way by the end of the film. Those in low status—the criminal, the prostitute, the coward, and the drunk—all end up redeemed. Each character is critical, and each has his or her moments. Peacock, for instance, is so meek and unassuming that he can’t get anyone to get his name or occupation straight (he’s mistaken for a preacher frequently) until the very end of the movie, after he’s been wounded and survived. Our society matron ends up depending on Dallas the prostitute for assistance, comfort, and care of her child; in fact, it is Dallas who carries the child for almost the entire movie that we are aware of a child. The pregnancy is hidden throughout, and the mother is never seen holding her own infant.

In short, it’s the relationships that happen between the people that are the real thrust of Stagecoach. The ensemble nature of the story and the cast is what drives the film, not Wayne’s performance. If any character is the true center of the film, it is Claire Trevor’s Dallas. When the Ringo Kid goes to confront his nemeses, we see only the beginnings of the fight, and our focus is immediately shifted to Dallas and her concern with the aftermath.

In a world where the Western has become a clichéd film genre, it’s difficult to attempt to watch these clichés unfold without reacting to them in a jaded fashion. It’s important to keep in mind with a film like Stagecoach that in many way, the conventions of the last-minute cavalry rescue, the town drunk, the hooker with the heart of gold, and many of the other standard characters and tropes of the genre were still being invented.

It wouldn’t be a stretch to suggest that as a Western, Stagecoach looks its age. There’s no real way around the fact that this film would probably flop if made exactly like this today. However, there’s much more here than just a standard Western. Stagecoach is worth watching for what Ford was able to accomplish with not just story, but with a cast this large and this good, and with a cast of characters this diverse and yet complete. Are the characters one- and two-dimensional? Perhaps, but each one a complete story arc, and each one grows and changes over the course of the film. The drunk reforms, the whiskey salesmen survives through his fear, the society dame has her prejudice revealed, the bank manager is destroyed. Even Ringo, his revenge complete, has realized that it’s time to stop being a wild gun and time to settle down and raise a family.

Why to watch Stagecoach: It’s the film that made John Wayne a star.
Why not to watch: Just because many clichés started here, it doesn’t mean they don’t still read as clichés.
Posted by SJHoneywell at 12:37 AM