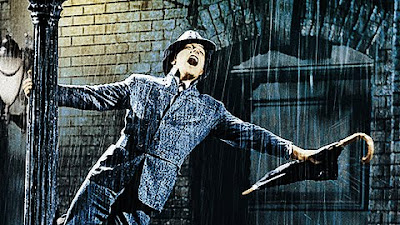 When the conversation turns to great movies, as with “The List,” there’s often (or at least should be) an effort made to hit every genre of film. I know far too many people who hate a particular genre and write off everything from that genre regardless of quality. I try very hard not to do that. I admit that even some of the best musicals pass over my head, but I do try to be aware of what makes a great one, and what separates the great from the good and the mediocre.

This makes Singin’ in the Rain a dodgy proposition for someone like me, who does have a bias against musicals. Further, this is a film that is steeped in the tradition of musicals that irks me. I can willingly suspend my disbelief for any number of strange ideas and plot points. If you tell me that the film takes place in a world with robots and faster-than-light space travel, I’ll buy into it provided that the film itself stays true to that and contains a level of internal reality. Musicals don’t do that. They propose to be the real world, but people break off into orchestrated song and fully-realized and choreographed dance numbers. That doesn’t happen in the real world, and it throws me.

So, a warning: this happens frequently in Singin’ in the Rain. And for once (and for a wonder), I don’t really care that much. This film is simply too damn good. The numbers are great, the dancing is fantastic, and the story is entertaining and fun enough that I can actually ignore the whole “orchestra and choreography” thing that bothers me so much.

We start at a movie premiere of the latest silent film starring Don Lockwood (Gene Kelly) and Lena Lamont (Jean Hagen). We get a short biography of Lockwood and his best friend Cosmo Brown (Donald O’Connor), which covers their misspent youth and early days in Vaudeville, and the wow number “Fit as a Fiddle,” which really is a hell of a dance, and on a real stage would have people in the aisles instead of the poor reception we get here. We also learn of Lockwood’s early film career as a stuntman and his promotion to leading man by studio producer R.F. Simpson (Millard Mitchell).

What we also learn right away is that Lena Lamont has a grating voice and is dumber than a sack of hammers. In Lena’s world, anything the tabloids print is the truth, so when she and her co-star are romantically linked in the movies, they must be romantically linked in real life. Lockwood actually despises her, and becomes enamored of a young actress named Kathy Selden (Debbie Reynolds) when fate brings them together twice, each one getting embarrassed in front of the other.

Everyone’s world changes with the release of The Jazz Singer and the public demand for talkies. The latest Lockwood/Lamont film is turned into a talkie with disastrous results in the test screening. Thinking it over, Don, Cosmo, and Kathy decide that maybe it should play as a musical, with Kathy doing the voice work for Lena. Eventually, Lena finds out and flexes her muscle in the studio, leading to the climax of the film’s debut as a musical picture and a happy ending all around.

The plot is a fun one, but it’s not really the reason to watch this film. The reason to watch is the song and dance numbers, and yes, I feel very strange saying that. The painful (to me) truth is that virtually every number here is one that would be the focus of a lesser film. They’re all great. Whenever I see this film, I’m curious as to why O’Connor isn’t better known than he is, because he tears the hell out of the floor. He manages to keep pace with Kelly in their numbers together, and crushes the “Make ‘em Laugh” number in one of the high points of not just this film, but film.

Of course, the big deal number is the “Gotta Dance” piece toward the end, which is a long dance sequence that is being inserted into the revamped version of the original talkie. Oddly, I find it to be the one that is the least compelling. Sure, the sequence with Cyd Charisse wearing the short green number is great, but the sequence goes on too long for my tastes, and really exists only to give Kelly another number to hoof in. Admittedly, though, he hoofs better than pretty much anyone ever, and he is something magical to watch on the screen.

Kelly is always compelling, and he’s a joy to watch. The thing I have always liked about Gene Kelly is that he could act as well as dance—Inherit the Wind proved that. Donald O’Connor was badly underrated, or isn’t famous enough, or something and makes for great comic relief. Debbie Reynolds earned every role she got after this one with this performance. The unsung hero here, though, is Jean Hagen in the thankless role of a wicked, vindictive idiot. She’s as good as everyone else, even though she doesn’t get to sing or dance.

What can I tell you? I’m a sucker for Gene Kelly (and Fred Astaire—we’ll get to him eventually), and Singin’ in the Rain has everything and more. This is a hell of a picture; even a die-hard musical hater like me walks away from it humming a tune.

Why to watch Singin’ in the Rain: The most flawless musical comedy/dance film ever made.
Why not to watch: Your personal bias won’t let you enjoy it.
Posted by SJHoneywell at 11:31 PM