The Getaway is Built In 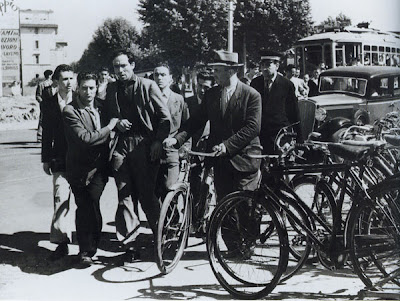 Well, after watching two wrist-slitters yesterday, I guess I haven’t had enough depression for this week, because I decided to push my way through Vittorio de Sica’s Ladri di Biciclette (The Bicycle Thief, sometimes called Bicycle Thieves), which kicks our main character in the hoolies within the first 15 minutes or so and never stops.

Our film takes place in post-war Italy, where the economy is far worse than it has been in the U.S. in recent years. Everyone is out of work, and everyone is looking for work. Our hero, Antonio Ricci (Lamberto Maggiorani) is offered a job by the employment office. He is to ride around town putting up posters. The downside is that to do the work, he needs a bicycle, and his is in hock.

He tells his wife Maria (Lianella Carell) about the problem, and she helps by hocking the family’s sheets to get his bike out of the pawnbroker’s shop. All seems well, and they even have a little bit of money left over. She goes to pay a fortune teller the money she owes, and Antonio scoffs at her for spending money in such a foolish way. The next day, he heads out for his new job, and if you can remember the name of the film, you can guess what happens. His bike is stolen while he is putting up a poster. Now unable to continue his job, Antonio is desperate—even more desperate than before.

The police refuse to help—they have more serious crimes to deal with than a stolen bicycle, no matter how devastating the loss is to Antonio and his family. He and his son Bruno (Enzo Staiola) search through the streets for the missing bike and are unable to find it. He does, however, spot the thief and confronts him. The police are summoned, and the thief (Vittorio Antonucci) is not arrested because of a lack of evidence. Antonio is humiliated by the neighbors of the thief as he walks away, more desperate than ever—especially because he still doesn’t have his bicycle; the thief has already sold it. Now, Antonio’s only option is to steal a bike himself.

The English translation of this title is mildly contentious. The copy I have calls it The Bicycle Thief, but in truth there are at least two thieves in this film—the man who steals Antonio’s bike and Antonio himself. There’s a deeper meaning here as well, because the bicycle represents life and wealth to many different people. For Antonio, it is a way to support his wife and son; for the thief, it is a way to do the same, since he profits by selling his stolen goods. Additionally, the purchaser of the bicycle from the thief survives by virtue of the bicycle as well.

In essence, Antonio Ricci is merely one story of the tens of thousands that could have been told in post-war Rome. When Maria pawns the linens, we see them go onto a high shelf laden with hundreds and thousands of similar bundles; the Riccis are not the only ones forced into pawning off everything that they own for another meal and another day of survival.

What is the point of this film? Good question. On the one hand, it seems to be about the value of a person. Antonio Ricci, in the opinion of the masses in the film, has no value because he loses his bicycle and can no longer provide for his family. Without the ability to feed his wife and child, he becomes nothing more than a creature of desperation, looking for a way to survive the increasingly difficult and relentless circumstances he has been thrust into. Essentially, he has no true value—only the bicycle does.

And yet, he continually attempts to prove that he does have value as a man. In a heartbreaking scene, after scolding Bruno, the pair go to a restaurant, and Antonio spends a large percentage of the family’s remaining cash to give the boy a treat. It is as if providing something special for Bruno gives him back a measure of his humanity—he can still do the sort of thing a father is supposed to do for his children, even if he can only do so this one time.

Perhaps this film is merely striking me at a bad time. It’s the end of the year, Christmas has just come and emptied everyone’s bank account, the economy is still in the tank, and my car is racking up repairs. Without the car, I cannot perform my job, just as Antonio cannot perform his. I’d like to suggest that I have more value than my car, but at times like this, I begin to wonder.

(If you viewed this before the write-up was complete, I apologize. This film required that I sleep on it to fully digest it.)

Why to watch Ladri di Biciclette: A classic film for many, many reasons.
Why not to watch: Holy crap on a stick is it depressing.
Posted by SJHoneywell at 11:58 PM