The Oddest Flower in the Bouquet of Love 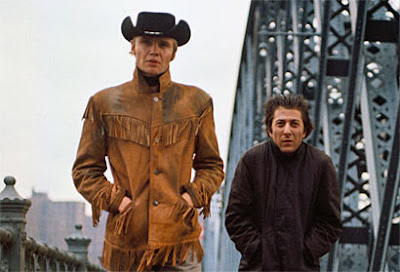 What will you do to survive? How far will you go? In John Schlesinger’s Midnight Cowboy, we discover exactly how for our putative hero Joe Buck (Jon Voight) will go to live another day in New York City in pursuit of a sad little dream.

Joe is a cowboy, not a “for-real cowboy,” as he tells people throughout the film, but the closest thing to a cowboy in New York City. At the start of the film, Joe is a dishwasher in the Podunk ass-end of Texas who decides that life would be better if he were having a lot more sex. While that’s a career option for women with little moral standing, there’s not really a huge market for guys looking to get paid to have sex with women in the Podunk ass-end of Texas, so Joe collects his last paycheck, buys himself some slick cowboy duds, and hops a bus for New York City.

Sadly for Joe, New York doesn’t operate in the same way that he’s used to. He’s a rube, and he’s also an obvious victim and target. It’s apparent immediately that Joe is either going to need a lot of good luck or a very good teacher if he’s going to survive, let alone thrive in the city. He starts his “career” as a hustler by propositioning women on the street, asking if they can show him to the Statue of Liberty. This gets him into the penthouse of Cass (Sylvia Miles), and it appears that his career is off to a rollicking start.

Sadly, though, Cass is offended by his asking her for cash, and ends up demanding money from him. The cycle continues when Joe meets Enrico Salvatore “Ratso” Rizzo (Dustin Hoffman), a crippled no-account who fashions himself as a con man but is too well known by the downtrodden to hustle anyone but a rube like Joe. Ratso hustles Joe for $20, telling him that he’ll take him to a “manager” but instead dropping him off with a religious fanatic (John McGiver, a classic “that guy”).

Eventually, Joe finds Ratso again, and shakes him down for his money, but naturally it’s all been spent. In a rare moment of conscience, Ratso takes in the big stranger, inviting him back to his place, which is a condemned building that the two squat in. They become petty criminals, scamming people for change, ripping off grocers for food, and trying to find a way to get Joe’s stud career started. It finally happens when Joe receives an invitation to a party hosted by some Andy Warhol wannabees, and the pair manages to entice Shirley (Brenda Vaccaro) to pay $20 to spend the night with Joe. However, Ratso takes a tumble down the stairs, and his health takes a drastic turn for the worse. He becomes convinced that the only thing that will solve his health problems is getting to Florida.

That’s the rough outline. Contained within is a series of some of the most tragic and sad events I’ve seen in a movie for a long time. Joe is a complete innocent, good only for lovin’ as he tells us at one point. Through a series of flashbacks, we see the life he spent with his grandmother, who frequently abandoned him. We also see his relationship with his girlfriend Crazy Annie (Jennifer Salt), a relationship that ends in a gang rape and Annie in an institution.

It’s evident pretty quickly after Joe hits New York that his dream is doomed. Flat broke and kicked out of his hotel, Joe scams crackers off tables in restaurants. Desperate at one point, he allows a young gay man (Bob Balaban) to take him into a movie theater and perform oral sex on him, a low he didn’t think he was capable of reaching. In this world, though, nothing can go right for Joe, and the young man doesn’t have any money to pay him, leaving Joe still broke and, by his own code, defiled. By the end of the film, Joe is willing to do almost anything to get Ratso to Florida, pleasuring men being fair game.

There are definite homosexual and homoerotic undertones throughout the film, particularly in the relationship between Joe and Ratso. Are they gay? It’s hard to tell. There are certainly tender moments between the two of them. While we see flashbacks of Joe’s past, when we enter Ratso’s mind, it’s to envision his magical future in Florida, generally with a shirtless, attractive Joe. It’s not too hard to read this as homoerotic, but I don’t think it is. That these two men come to love each other, but I don’t gather a sexual thing between the two of them. They’re merely devoted to each other. Still, that’s been a common read. This is further enforced by the constant gaybashing the two of them do. This is further indicated by Joe’s inability to perform with Shirley until she accuses him of being gay, which suddenly changes everything. Of course, this is merely my opinion, and the reading that the two men are closeted is certainly one that can be justified.

What stays with me from the film is the plight of these two men, desperate for anything to get them out of their situation and unable to do anything that works, never getting ahead. At one point, Joe pawns his little battery operated radio for $5. This doesn’t sound like much except that the radio is virtually the only thing he has left from his life in Texas. It’s been his constant companion, the only thing he has for entertainment. To see it go, and go so quickly is a tragic moment in the film. It’s evident to anyone watching that there’s no chance in hell of him getting his radio back. They freeze in their squat, barely able to cook a meal, and at almost every turn, their life together disintegrates.

Midnight Cowboy is celebrated in no small part because it was originally released with an X rating, a rating that was subsequently dropped to R without any changes or cuts. Why did it get an X initially? I have no idea. It’s certainly got enough troubling material in it that I wouldn’t let anyone under 17 watch it, but it’s hardly explicit.

Despite the fact that this film is almost as old as I am, very little in it has aged. This is still a masterful film worth watching, worth studying.

Why to watch Midnight Cowboy: The strangest love this side of Martha Ivers.
Why not to watch: You can’t get past the X rating
Posted by SJHoneywell at 1:37 AM