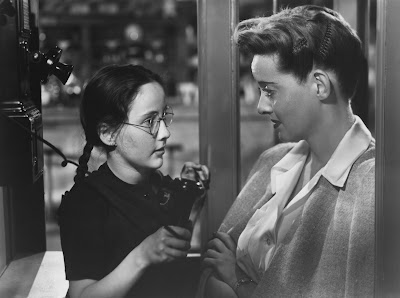 Sometimes, people have really good years. If you’d asked me a few months ago to define a good year for an actor, I’d have suggested James Mason in 1959; he was in Journey to the Center of the Earth and North by Northwest, which is the greatest film in the world in your humble narrator’s opinion. However, I might now suggest that both Claude Rains and Paul Henreid may have had the finest year ever in 1942. Both were in Casablanca, and almost weren’t because they were kept overlong filming Now, Voyager for Irving Rapper.

We start in the Vale home of Boston, and they are frequently referred to as “The Vales,” so you know they’re moneyed. Charlotte Vale (Bette Davis) is the spinster daughter of Mrs. Henry Vale (Gladys Cooper), who is unquestionably in the running for most horrifying mother in screen history. Charlotte’s life is cloistered—there’s no other real way to put it. She’s virtually a shut in, dumpy, and completely under the thumb of her vicious and reprehensible mother. She’s also on the verge of a nervous breakdown, equally because of her mother.

Into this stew of misery enters Dr. Jaquith (Claude Rains), one of the greatest psychiatrists in the world. She confesses her pitiful life to him, including the fact that her one brief romance was squashed by Mommy Dearest and she is desperately unhappy. He is convinced that she could recover completely if she spent a little time at his sanitarium up in Vermont. She goes, and we discover that indeed, the stay in the sanitarium changes her dramatically. Rather than rush home to see mother again, she instead takes a cruise, where her life changes even more.

It is here that she meets Jerry Durrance (Paul Henreid), a married man with a terrible marriage and a daughter very much like Charlotte. She and Jerry are strongly attracted to each other despite his situation. The cruise ends up in Rio de Janeiro and the pair go for a ride with a driver who speaks no English. When they end up in an accident that destroys the car, the two are stranded for a night. Naturally, the movie magic happens, and the two of them end up very much in love. She misses the boat, and he convinces her to stay with him for five days before catching the boat in Buenos Aires. Love blooms, of course, although both of them know it is doomed.

Eventually, Charlotte goes back home and confronts Mother, who is having none of it. However, Charlotte sticks to her guns and defies her mother. It helps that she receives a gift of flowers from Jerry, which gives her courage. At a dinner, before which Mother damages her ankle, Charlotte takes charge and much to the shock of her relatives, is charming and in command. It is here that she meets Elliot Livingston (John Loder), and the two begin a courtship despite the fact that her true love is Jerry.

She and Jerry meet again at a party, and suddenly romance is in bloom again. On a whim, Charlotte ends the romance with Elliot, cancelling their impending nuptials. When she announces this to her mother, Mother obliges everyone in the audience by keeling over with a heart attack and expiring. Charlotte inherits everything, but is so guilt-ridden that she immediately returns to the sanitarium.

It’s here that she meets Christina (Janis Wilson, who is strangely uncredited for being so central to the film), who happens to be the daughter of Jerry. She is immediately taken with the girl, in part because she reminds her of herself and partly because she is Jerry’s daughter. And, of course, this means that once again she is tied up in the life of Jerry Durrance.

Now, Voyager is not the happiest movie in the world, which might well seem strange for a romance from the mid-1940s. Movies from this era, the country in the middle of a terrible war on two fronts, tended to be happy affairs because the country needed them. This one doesn’t go for the feel-good, though, which does nothing for me but make me respected it all the more. It goes where it should and where it needs to.

One of the great things about the film is not just the acting of Bette Davis, but the role itself. Charlotte Vale, who starts as such a pitiable character ends up as a truly strong woman in charge of her own destiny. It’s a fantastic transformation, and one that is actually believable. Her final scene with Jerry is one of the great scenes from any film, and certainly the most affecting in the film.

Aside from the final line, the great moment in the film happens three times—Jerry plants two cigarettes in his mouth, lights both, and gives one to Charlotte. It seems so natural and such a magically subtle piece of intimacy that it almost seems impossible that it was scripted.

It’s also worth noting that the great characters in the film are not limited to Charlotte, the love-struck Jerry, and the highly entertaining and forthright doctor. My absolute favorite character in the film is Mrs. Vale’s private nurse, Dora (Mary Wickes). She’s a firecracker, and is a small breath of comedy in what is otherwise the very model of what people are thinking of when they think “tear-jerker.”

This is an impressive film, that is, I think, more relevant and accessible today than it was when first filmed. There’s a sense of real backbone in the character of Charlotte Vale, a sense of feminism before the word had a meaning that resonates very powerfully today. Sometimes films age like vinegar and sometimes they age like fine wine. Now, Voyager is the second sort; it’s gotten better with age.

It’s worth noting that this is not a film that could easily be remade. The sensibilities of the 1940s are very important to this movie. Today, Jerry would get divorced from his shrew of a wife and marry Charlotte a couple of days after the cruise, destroying the entire second half of the film. The fact that their love cannot be is what drives the entire narrative structure of the film. I’m perfectly fine with this; since the film wouldn’t work in that sense for a modern audience, it means that any attempt to bring this movie into the current era is virtually doomed from the outset. Good. This one should be left alone as the classic it is.

Why to watch Now, Voyager: Bette Davis at the absolute top of her very strong game.
Why not to watch: The waves of pure, entitled evil that waft off Mrs. Vale.
Posted by SJHoneywell at 2:03 AM