The Kindness of Strangers

There are “chick flicks” and then there are “chick flicks.” On the one hand, you have the kind of film my wife tends to favor—bland romantic comedies where it’s obvious in the first 15 minutes that the guy will end up with the girl no matter how many hoops they have to jump through. There’s not much at stake in these movies, and while some are better than others, they are, in general, fluffy feel-goods. 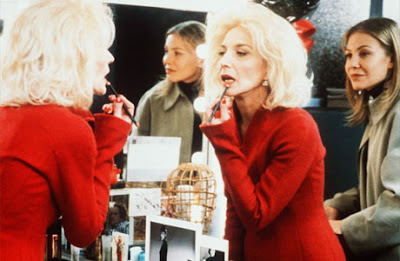 And then you have films like Todo Sobre Mi Madre (All About My Mother), which is a prime example of a three-hankie film. Oh, you could go through a box of tissue on this one, folks. It’s nothing but gut punches from about 15-minutes in, and even the uplift at the end is sure to drag a tear out of many a stern heart.

Manuela (Cecilia Roth) is our main character. She works as the coordinator of organ transplants at a hospital and lives with her 17-year-old son. Her son Esteban (Eloy Azorin) wants to be a writer, and wants to learn more about his father, who he has never met. On his birthday, the two go to the theater to see “A Streetcar Named Desire,” starring actress Huma Rojo (Marisa Paredes) as Blanche. Esteban tries to get an autograph after the show, but fails, and while he stands in the rain watching Huma’s car drive off, he is struck by another car and killed. And thus, we are one hanky in. Manuela goes to Barcelona to find Esteban’s father.

As it turns out, the father has vanished, taking everything of his roommate’s. His roommate is Agrado (Antonia San Juan), a transvestite prostitute. Manuela arrives just in time to save Agrado from a beating administered by a John (a Juan, perhaps?), and the two return to Agrado’s place. The next morning, Agrado introduces Manuela to Sister Rosa (Penelope Cruz), a local nun who works with the local hookers and junkies, finding them honest work.

In the midst of all of this, Manuela tracks down Huma to speak with her, but it seems that Huma has problems of her own. One of her co-stars is Nina (Candela Pena), who is also a junkie and evidently her lover. Manuela helps Huma track Nina down during a buy, and, essentially, this causes Huma to trust Manuela implicitly, and she hires her to act as the personal assistant for both her and Nina. Manuela, needing a job since she left Madrid, accepts, and soon begins doing things for Huma, and taking care of Sister Rosa when not at work.

Nina, constantly looking for a fix, causes no end of problems, including being too bombed one night to perform, so Manuela steps in, causing a great deal of friction, and forcing her to leave the job. She explains everything to Huma, as well as her own past with “A Streetcar Named Desire.” As it turns out, she used to perform in an amateur company, and met her husband (and Esteban’s father) during a production of the show, and of course, lost her son immediately following a performance of the same show. Huma accepts her resignation but stays friendly with her, and hires Agrado has a replacement.

Of course, eventually Rosa has the baby, dies in childbirth (third hanky!) and we also learn that Rosa’s father is suffering from Alzheimer’s (hope that first hanky is dry by now). Yes, there’s an uplifting ending, but not before at least one more pile of tragedy gets dumped on us in the person of Manuela’s former husband, now-AIDS-ridden transvestite prostitute, Lola (Toni Canto).

It would be a lie to say that I was unmoved by all of this, because, well, it would be impossible not to be moved by some of it. But the movie seems to exist as a platform for continual bad things to happen to everybody at a near-constant clip. Misery gets piled on sadness gets piled on the worst luck possible throughout the film, and every step forward has a corresponding three steps backwards in terms of how much the characters are dealing with at any time.

Of all of them, my favorite is Agrado. Manuela is certainly a tower of strength throughout, and Huma—just one letter off from “Human,” shows that her strength as an actress comes from the tragedy of her life no less than anyone else’s. Agrado just exists, though. She’s a whore and fairly content with that as her occupation, and when she retires from that life to become the assistant to Huma, she’s content with that as well. Perhaps everything rolls off Agrado because Agrado doesn’t get involved in any of it. Good for her.

This is not a film to watch lightly, or to watch just because it’s sitting around. It requires the right mood. As for me, I get enough kicks to the groinular region without signing up for watching someone else get dumped on by the problems of the world. 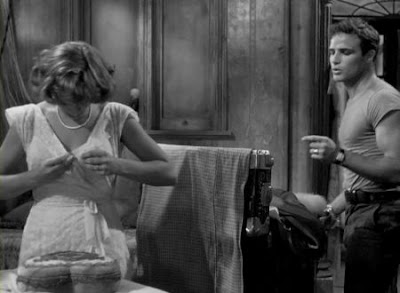 Originally, I was prepared to watch another of Almodovar’s films today, but there’s such a strong thread of A Streetcar Named Desire running through Todo Sobre Mi Madre that it seemed natural to head in this direction. Fortunately, the film was streaming, and so here we are. There are a number of connections between the two, but more the stage play than the film. In the stage play, for instance, there are a number of hints toward homosexuality—Blanche’s husband killed himself after being caught in a homosexual affair. Shades of Manuela’s husband, condemned to a death by AIDS from the same source.

The film version stars Vivian Leigh as Blanche DuBois, a faded and fading Southern belle fallen on hard times. The family fortune, what little there was to begin with is gone, and she arrives in New Orleans at the apartment of her sister, Stella (Kim Hunter). Stella’s husband, Stanley Kowalski (Marlon Brando), is a brute and a thug, and takes both an immediate dislike to Blanche as well as having an immediate attraction to her.

This attraction is mutual, in no small part because the two are near opposites. Blanche, for all of her lost fortune, is the epitome of a Southern belle. She puts on constant airs, flirts shamelessly with whomever is around her, and attempts to look every inch the damsel in distress. Stanley, on the other hand, is a primitive. He demands what is his from the sale of the family property, even if he has to beat it out of Blanche, who he treats roughly. There’s a part of her that likes this rough treatment, though. It’s evident in her eyes.

The complication here, or at least the main one, is Blanche herself. It becomes evident that she is not so much taking a sabbatical from teaching as she has been released from her position by virtue of an affair with one of her 17-year-old students. This, combined with that suicidal, gay husband of hers has caused her to retreat into a world where the fantasy of her Southern belle-hood is just as powerful (if not more) than her reality.

The fact that Stanley is such a brute doesn’t help matters here. He’s abusive to Stella, both physically and emotionally, but like any good sub-dom couple, Stella is into it. After the poker game, during which Blanche encounters “Mitch” Mitchell (Karl Malden) for the first time, Stanley loses a big hand, and goes berserk, punching the pregnant Stella. She and Blanche retreat to the apartment upstairs. Stanley goes out on the street and yells for her—that classic moment of Brando in the torn t-shirt screaming “Stella!” at the top of his lungs. And Stella comes to his call, pure sex walking down those stairs despite her plainness. And the next morning, she revels in the night she had, talking of how Stanley’s brutishness thrills her.

Blanche sets her sights on Mitch as her way of getting out of the apartment of her sister and of the both hateful and irrepressibly sexy Stanley Kowalski. Her alcoholism doesn’t help her any, of course, although she does try to hide it. And in her own way, Blanche needs Stanley as much as she thinks she needs Mitch—a guy collecting for the paper becomes just another man in her life who needs to prove to her that she is still desirable. Ultimately, of course, it ends badly with Stanley giving in to the urges that have been evident from the moment he first set eyes on Blanche and the conclusion that suggests that Stella might forgive him even this.

A Streetcar Named Desire won a quartet of Oscars, including three for acting. Vivian Leigh, Kim Hunter, and Karl Malden all walked away with gold statues. Brando was nominated but lost out to Bogart. While it’s hard to object to Bogart winning anything, this film has become the one that made Brando who he was. Ultimately, although he didn’t win anything for the role, it’s become impossible to imagine anyone else playing the part of Stanley Kowalski, and every version of this play since has referenced him. This film is Brando at both the beginning and the height of his power and raw sexuality. When you see him in later films, it can be difficult to remember what he once looked like.

As a final note, I know several people who are a sort of modern day Blanche DuBois—the feminine posturing, the feigned helplessness. I understand the sort of mindset that makes this an attractive characteristic. It’s not one I favor—helplessness doesn’t attract me in the least—but Vivian Leigh plays it for every ounce of what it’s worth.

Why to watch Todo Sobre Mi Madre: Powerful drama.
Why not to watch: You’ll run out of tissue and revert to your shirt sleeves.

Why to watch A Streetcar Named Desire: Brando’s coming out party.
Why not to watch: It’s arguably less happy than Todo Sobre Mi Madre.
Posted by SJHoneywell at 11:57 PM