What Tarantino Dreams of 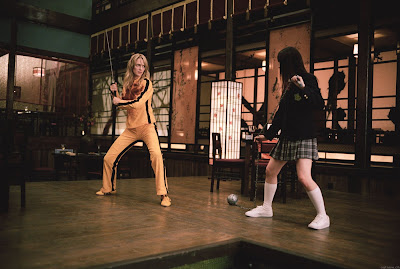 Quentin Tarantino tends to provoke two reactions: unbridled adulation or equally unbridled disdain. Strangely, I fall somewhere in the middle. I appreciate some of his films. When Pulp Fiction was shiny and new, I loved it, although I love it less now. Reservoir Dogs is still one of the best films of its decade. But I soured on Mr. Tarantino, in no small part because it seemed like he made a huge name for himself and then did nothing as a director for years. Kill Bill: Vol. 1 is his fourth complete film, made 11 years after his first full-length feature.

In short, while I think the man had and possibly still has some real chops (I’ve yet to see Inglourious Basterds, his fourth film on the list along with the other three mentioned), it seems to me that he believes his own press. One of the reasons I like his first two films as much as I do is because he’s obviously a smart guy who can make reference to film culture both well-known and obscure. I appreciate that. However, it seems also that he can’t not make reference to such things and enjoys showing his audience exactly how much he knows all the time. Characters in his films are hyper-aware of pieces of pop culture—a band, a film, a whatever—and this seems to be to make us as audience aware that Tarantino knows all about those bits of pop culture. He’s often in love with his dialogue to the detriment of his films. That’s my opinion, of course.

Kill Bill: Vol. 1 is a revenge picture, pure and simple. We open with a fight between a character known only as The Bride (Uma Thurman…and the character’s real name is evidently revealed in the second film as Beatrix Kiddo. If you look quickly and carefully, though, you can see it on her plane tickets a couple of times) and a woman named Vernita Green (Vivica A. Fox). They destroy the hell out of Vernita’s house until her daughter comes home, and then the two talk civilly, planning a fight for later that evening. When Vernita goes for the double-cross and tries to take out the Bride with a gun, she ends up dead. The Bride leaves, crossing a name off the list, and we can see that she’s already scratched off the name O-Ren Ishii (Lucy Liu).

The rest of the film to the very end is told in flashback. We start with where the revenge starts—the Bride is known by this name because she was attacked by a collection of assassins on her wedding day. The entire wedding party, as well as her unborn child, were killed. It’s also made evident that the Bride was once a member of this group, led by the Bill (David Carradine, who does not appear in the flesh aside from his hands in this film) of the title.

The Bride is comatose for four years, during which she is evidently repeatedly raped by a sadistic hospital worker, who also sells out her services. We discover this when she comes to just before another rape and annihilates the rapist as well as the hospital worker. While she’s working on getting her legs to function again, she relates the story of O-Ren’s rise to power in the Tokyo underworld. And then we get the story of her getting a kick-ass sword from a retired swordmaker (Sonny Chiba) and the giant battle scene against O-Ren and her minions including schoolgirl assassin Gogo Yubari. And the rest of the story presumably happens in the second film, which I did not watch.

Kill Bill is all about spurting blood, violent death, and 1970’s-style wire work. It’s as much a modern action/revenge movie as it is an homage to the Shaw Brothers films and the martial arts classics of that era. This is undoubtedly intentional on Tarantino’s part. Averaged out, there’s a dead body for almost every minute of the film here. Blood sprays in geysers from severed limbs and heads, fountaining as if arteries were high-pressure hoses. The giant battle takes place mainly in black and white, apparently in homage to the old martial arts flicks that did it to avoid television censorship. That which isn’t in black and white is in monochromatic blue and shown in shadow pantomime.

It’s extreme. I’ve never let a bit of gore or a good bloodletting stop me from liking a film, but this was simply too damn much. I fully understand why people like this movie, why people look at this as a continuation of Tarantino’s promise. I demur. It’s too much, too extreme.

Again, in a Tarantino film, there are no innocents. The Bride can’t wake up from her coma and escape the hospital—it has to happen as a part of a rape scene that we as viewers are led to believe has happened over and over in the four years she has been comatose. That’s the sort of thing that makes me wonder where Tarantino’s head is at. Why the hell was that necessary? To show that the Bride can kick ass? We already know that from the opening sequence. To up the revenge? Also not really necessary. To add another layer of depravity in the film and show us again that Tarantino has a thing for female characters who can kick his ass? Yep.

I know I’m in the minority here, but so much of the violence here seems to be nothing but violence for its own sake. It does nothing for me. Will I watch the sequel? Probably not.

*EDIT*
Thanks to some excellent comments and a little more thought, I've finally come up with the way to describe this film: it's like a video game. "Soulless" is a great description (thanks, fellow 1001 blogger Edward Boe for that observation). The film reads like nothing so much as a stream of combats in an effort to get to the boss fight. This may be the reason the film is so popular and highly regarded.

I worked in the video game industry for about 12 years, first as a journalist and then as a hint book author. I haven't played a video game in seven years because I burned out and burned out hard. This may well be the reason this film holds no magic for me.