Marriage Before and After 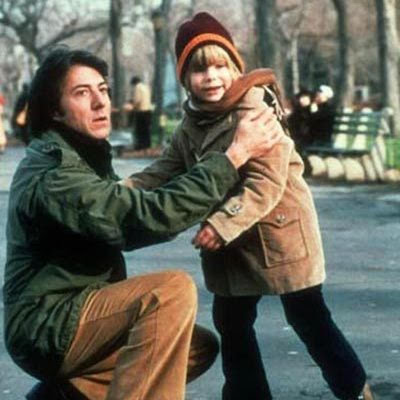 Around the time my parents were divorced, my sister said something to the effect that no matter how old you are, you’re essentially two years old when your parents split. That’s pretty accurate. It’s also the subject of Kramer vs. Kramer, which means it’s the happiest damn movie I’ve seen in a long time. Yes, that’s sarcasm.

We start with Ted Kramer (Dustin Hoffman), who works for a high profile advertising agency. Because of his hard work and skill, he’s landed a massive account and is on the fast track. He goes home to share the good news with his wife Joanna (Meryl Streep) and their son Billy (Justin Henry). He’s greeted with some bad news, though: Joanna is leaving him, and she does so, leaving their son as well.

This creates a huge problem for the fast-track Ted, since he now has a young child to deal with on his own. Like a typical late-‘70s father, he’s not really aware of how to care for his son. He muddles through the best he can, but this also creates a number of problems for him at work. His attention to detail begins to slip. Ted begins to draw a little closer to his divorced neighbor Margaret (Jane Alexander), has a one night stand with a coworker (JoBeth Williams), and starts to figure out how to be a father to his son.

That’s too easy, though. Joanna returns from her soul-searching sojourn in California and decides she wants custody of Billy. Ted decides to fight it regardless of consequence. The first consequence turns out to be his job, which of course is to his detriment when it comes to the court battle.

I’m not going to spoil this movie, so I’m going to leave the results of that trial out of this write up. I’m also to leave out the actual ending, which is sweet, touching, and completely unrealistic. We’re not going to go there.

There are a couple of parts of this movie I do want to talk about, though. First, I want to go into the relationship between Ted and Billy. I was impressed mainly with how real the relationship came across. This was a real father and son doing real father and son things, having real father and son troubles. There’s joy when Ted teaches Billy how to ride a bike. Ted is excited to see his son ride off, and then shouts after him not to go too far. The Salisbury steak scene, where Billy decides he’s tired of TV dinners and instead grabs the ice cream from the freezer, leading to a huge fight is also very real. I don’t have sons; I have daughters. Still, these scenes felt completely genuine to me, and I bought them completely.

The film lives and dies in the courtroom, though, and these scenes are very hard to watch. Both Joanna and Ted are destroyed on the stand by each other’s lawyers. It’s painful to see, and much more painful to watch Ted go through it, because by the time we get to the actual custody hearing, we’ve spent so much time with Ted and watched his relationship with his son grow that we want him to come out on top. Everything is brought up—Ted losing his job despite the fact that he did so because of his son; the accident at the playground that gave Billy stitches comes out, too. It’s painful to witness.

This is not a film designed to give any sort of sympathy for the women in this position. We’re supposed to like Ted and see that he has become a real father. We’re supposed to see Joanna as a cruel, selfish, manipulative bitch. In part, we do see that because that’s the character. We also see that, though, because by the time she shows back up in the film, we’re looking at everything from Ted’s point of view.

I know the film is manipulating me and I don’t really care. It works. It absolutely goes right for the gut and it scores, and it does this even while I realize what it’s doing. I can no more stop myself from caring about this guy and his kid than I can stop myself from breathing.

The big problem? The ending ruins everything the film tries to build up. After a whole film of what we get here, to have that ending and coda is a slap in the face to the audience. Shame on the filmmakers. 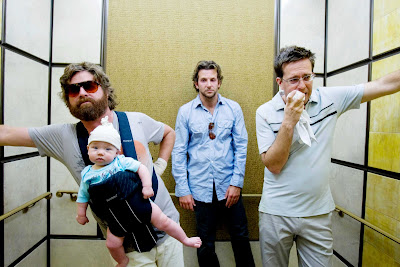 Doug Billings (Justin Bartha) is getting married. Before he does, his two best friends, school teacher Phil (Bradley Cooper) and dentist Stu (Ed Helms) as well as his fiancée’s socially backward and inappropriate brother Alan (Zach Galifianakis) are taking him to Vegas for a last night of partying and freedom. We discover that Doug is a decent guy, Alan is disturbing (but funny) and may have a seriously checkered past, Stu is completely under the thumb of his testicle shrinking girlfriend, and Phil pretty much despises his life. The four check in to Caesar’s Palace and sneak up to the roof for a toast before hitting the town.

What wasn’t planned was the additional ingredient in their drinks. Alan bought what he thought were tabs of Ecstasy and slipped them into everyone’s drinks. Instead, he spiked everyone’s drinks with roofies, and now no one has any memory of the bachelor party. That’s bad enough, but when the group wakes up, they discover a number of even more troubling developments. There are chickens in their suite, there’s a live, full-grown tiger in their bathroom, Stu is missing a tooth and the ring he was planning on using to propose to his evil girlfriend, Phil has a hospital bracelet on one wrist, they've stolen a police car, and there’s an infant tucked away in one of the rooms. Oh, and Doug is missing.

The rest of the film consists of the three guys backtracking through what they can discover to figure out what they did, where they went, what happened to them, and the location of Doug. Of course, since this is a comedy, things get far, far worse before they get better. The group discovers in short order that Stu married a prostitute named Jade (Heather Graham), the tiger was stolen from Mike Tyson’s house (Tyson makes a funny cameo as well), and that there is a naked, effeminate, Chinese mafia type (Ken Jeong, who is staggeringly funny) in the trunk of their car, who claims to have Doug in his possession and wants the $80,000 the group stole from him.

Of course, this is a comedy, so everything is going to turn out fine in the end. It’s the getting there that makes the film worth watching. The characters, for the most part, are caricatures, of course. Phil is far too smooth in the face of all of the problems to be a school teacher, and Alan is far too much of an idiot to be anything other than a film character. Ed Helms, though, as Stu really sells this for me. He’s funny, panicky, and has extreme mood swings that strike a needed note of realism. He reacts to all of this in the way most of us would.

This movie is funny. I can’t deny that. It’s also crude, disturbing, and isn’t going to be a film I enjoy watching around my parents or my children any time in the next, say, 60 years. Don’t take that to be an insult, though—this film really is funny all the way through. It’s screwball comedy taken to a strip club, and that’s okay. After all, what happens in Vegas stays in Vegas.

Why to watch Kramer vs. Kramer: A lesson in the real victims of divorce.
Why not to watch: The ending undoes the entire movie.

Why to watch The Hangover: It's brutally funny.
Why not to watch: Amelie got taken out of the book for this.
Posted by SJHoneywell at 11:56 PM