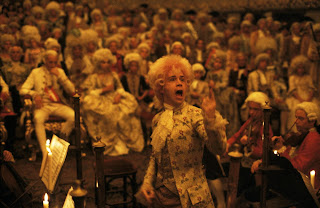 I had forgotten just how good Amadeus really is.

I mean that just as it sits. I remembered it as great in a way that few films are, of course. It’s great and grand in that “really earned Best Picture” way that even fewer films are. It’s the sort of film that, even if you had another horse in the race, you couldn’t really object to its winning. It’s a piece of Hollywood legend that Laurence Olivier announced the winner without even opening the envelope, but there really wasn’t any doubt which film deserved to win. I remembered all of this. I remembered Tom Hulce’s insane giggle and F. Murray Abraham’s combination of adoration and hatred. But I forgot just how damn good this film is, how entertaining it is, and how much I enjoy watching it all unfold.

And the music. Oh, the music. The glorious, unreal music that runs through this entire film from start to finish. The music is so sublime that even without the rest of the things that make this film so watchable and so both good and great, it would still be worth nearly three hours of your time simply to listen to it. Throughout we are graced with compositions from Salieri and Mozart, and are given key pieces of Mozart’s great works including The Marriage of Figaro, The Magic Flute, Don Giovanni, and his epic requiem mass. How the hell did I forget all of this?

Films like Amadeus are the reason that, when I first started this project, I decided to rewatch all of the films I had previously seen. There is no way I could do justice to this film from a memory of five years ago or even two years ago. There is simply too much here to see, too much nuance, too much madness and passion to keep in one’s mind for any length of time. No, Amadeus needs to be discussed and written about while it’s all still spinning around in one’s head.

The plot revolves around the now-ancient Antonio Salieri (Abraham), who has been confined to a mental institution. Salieri blames himself for the death of Mozart (Hulce) and attempts suicide. The next morning, a priest (Richard Frank) arrives to hear Salieri’s confession. Instead of the standard sort of church confessional, Salieri tells the story of his association with Mozart, and in so doing tells both his own story and that of Mozart himself.

We learn of Salieri’s early days and his promise to God to be faithful and chaste if he is given the ability to become a great composer of music. We learn of his meeting with Mozart, who proves to be an obscene little man with a manic laugh, but is nonetheless capable of speaking with music in a way that Salieri equates with the voice of God Himself. We learn of the jealousy, of Mozart’s problems with the court of Holy Roman Emperor Joseph II (Jeffrey Jones, in one of his best roles). We also get quite a bit of Mozart’s spendthrift ways, endless parties, and his strange relationship with his domineering and demanding father (Roy Dotrice).

And then we get to the meat of the tale—Salieri’s plan to kill off Amadeus. His plan is devilishly simple. The death of Mozart’s father gives him his in—he shows up at Mozart’s house dressed in a costume Herr Mozart wore to a costume ball and commissions a requiem mass for an unknown dead man, heavily implying that he is the returned spirit of Leopold Mozart and that the mass is for him. Mozart’s financial situation forces him to take the work despite working himself to death. Salieri’s plan is to find a way to kill Mozart, and then claim the requiem mass as his own, written in honor of the man who actually wrote it. Ah, the death of Mozart truly brought out the genius in Salieri, people would say, and Salieri would have his revenge, living forever by claiming the work of the man he killed.

Tom Hulce is often good in films, but he was never better than here. He plays Wolfgang Mozart with a manic intensity that is entirely believable. This is a man driven by a demon that forces him to write non-stop, pulling fully and perfectly formed compositions out of the air as if (Salieri describes it this way, in fact) simply taking dictation. He is unable to stop himself from working and just as unable to stop himself from indulging in any pleasure he can find, much to the distress of his wife Constanze (Elizabeth Berridge). He is a man addicted to everything he encounters, swallowing up enough life in his short time on Earth to last several lifetimes.

But with that, this is first and foremost F. Murray Abraham’s film. He is excellent as Salieri in his prime, battling with Mozart for fame and royal privilege. Nowhere is this more evident than in the costume ball, where Abraham holds a mask in front of his face and is left nothing to emote with but his eyes, which are unreal in their intensity. But as good as he is in this role, he is transcendent as the ancient, wizened Salieri gleefully confessing his crime to the priest. It is this part of the role that won him the Best Actor Oscar in my opinion, because it is this version of Salieri that is so memorable. There is both supreme pain and pleasure, both guilt and a complete lack of guilt in everything he says and does. He revels in the crime he believes he committed and is simultaneously wracked with guilt at depriving the world of the unwritten symphonies and operas of a true genius.

Even this is just the tip of the iceberg. Everything about this film is beautifully, perfectly done. Forman’s direction is inventive and dynamic. The costuming is as lush and sumptuous as any period piece. I see I’ve neglected a number of smaller, important roles. Cynthia Nixon appears as a maid who stays with the Mozarts, paid for by Salieri to investigate. Simon Callow has an important role as a vaudevillian who commissions “The Magic Flute” near the end of Mozart’s life. There’s so much here that I have trouble thinking of where to begin and, once begun, where to go. Amadeus is far more than the sum of its excellent parts, and that’s saying quite a bit.

It’s worth noting that there’s not a great deal of historical accuracy here. It’s true that Salieri spent his last year in a sanitarium for his health, and equally true that his music entered a period of decline. But he and Mozart were evidently little more than friendly rivals, and even collaborated on music. Salieri became a widely-respected instructor, having as his pupil no less than Beethoven. Accusing him of murder this long after the fact seems cruel, but it turns out to have been cruelty to be kind—the music of Salieri went through a fad, and there is evidently a yearly opera festival centered on his work. Even Mozart’s eventual location in a “common grave” is a misrepresentation of the truth. A “common grave” of the time meant only that he wasn’t nobility—he wasn’t dumped into a mass pit and covered in lime. But no matter. History sometimes needs to give way to drama and storytelling, and nowhere is that more evident than here.

Needless to say, this is a film of staggering singularity in my opinion. Nearly 30 years old, it has not lost a single ounce of its power or passion, and 30 years from now, it will still be just as grand, just as great, and most importantly, just as good. I should watch this more often than I have. So should you.

Why to watch Amadeus: It’s so much better than you remember.
Why not to watch: If you find a reason not to watch this, I don’t want to talk to you.