Fifty Shades of Quebecois, Part I 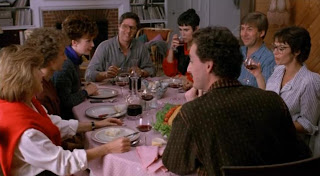 Oh, this is going to be interesting, at least initially. Here’s a film that has everything going against it in terms of what I normally look for in a film. Decline de l’Empire Americaine (The Decline of the American Empire) is a film almost exclusively about the sex lives of a group of really, really awful people. I mean that pretty much literally. There are parts of the film that deal in brief with other topics, but it always, always comes back to sex. It’s all these people talk about. Only in film do people obsess this much about their own genitalia.

Almost the entire first hour of the film splits between two groups of people in two different places. A group of four men, three of them teachers at a university and one evidently working on his degree, are making a meal. While they make this meal, two of them in particular talk about their wide variety of sexual escapades and conquests, the multiple times they have cheated on their spouses (although one is evidently divorced), and how nearly constant sex is a necessary thing for them. A third is evidently gay, and talks about his less-than-constant but still overwhelming need for sexual conquest, claiming that he lives alone specifically so he can bring sex partners home whenever he wishes. The only one who doesn't live with his dick outside his pants is the grad student.

At the same time, the four women who will be the guests at this dinner are slowly making their way around a gym, working machines, stretching, using the track, and eventually spending time in the sauna and Jacuzzi. Just like the men, all they talk about is sex, too. They discuss their various escapades, times they’ve specifically cheated or done things to humiliate the men in their lives. One of them has a series of whip marks across her back from a current lover who is evidently into rougher sex practices. In this group, there’s not a one who doesn’t have some extreme story of wife-swapping parties, multiple lovers, or infidelity to talk about. Through flashback, we discover that one of them has had an affair with two of the men we’ve encountered earlier.

And then we get the dinner. Guess what the conversation is about.

The name of the film and the main idea it presents comes at the beginning as one of the characters interviews an author for a radio show. The author makes the comment that the overall health of a society is inversely proportional to the amount of time and effort the people in that society spend on their own personal happiness. Essentially, more stable societies tend to have people concerned about the future. When established societies allow for people to be devoted to their own personal happiness, eventually things break down. And that’s precisely the situation here. All of these people, as well as the ninth, uninvited guest who is the young stud of one of the four women (the dangerous sex guy mentioned earlier), are completely devoted to their own fulfillment, and each is completely miserable in his or her own way.

I get the message, but it’s completely overdone. Anyone who obsesses this completely about anything would be constantly miserable, so it’s no surprise that these people are completely unfulfilled and constantly searching. The fact that they obsess about sex rather than their careers, or politics, or anything else seems to me to be a function of getting people to watch the film. If it’s sex, it’s a lot more interesting.

For me, though, it runs into the same problem as a film like In the Realm of the Senses in which the sex isn’t merely a part of life but the whole of it. There’s no room for anything else. Stories of sexual escapades that might initially be interesting or titillating quickly become just sort of mildly disgusting. I mean, how much time to you really want to spend contemplating the sex acts of a flabby, middle-aged guy? (Not me, the people in the film!)

In short, I get what Arcand was trying to say with this, but the initial hour of the film is far too long. I got the point much faster than that. The dinner, when everything is pretty much laid out on the table is more interesting, but by the time we get there, I’ve lost interest in the lives of these people—both their everyday lives and their evidently rampant sex lives.

Or is it that? A lot of what seems to be happening here is a sort of one-upmanship, each person pulling out a more bizarre, more extreme, more radical story than the next person to more or less claim a sort of ultimate deviant prize, being the one with the craziest sex story. The story is more important than the sex itself here. If we believe that all of the tales are true, there are times when it seems like the experiences were had not for the experience itself, but for the ability to talk about it later. It’s an interesting idea, if nothing else.

But at some point, I’ve had my fill and would like to hear about something else. This is especially true when the source of these stories is a group of smug douchebags.

Why to watch Declin de l’Empire Americaine: It asserts an interesting point of view if nothing else.
Why not to watch: Holy shit do I dislike all these people.