Film: The Hustler
Format: DVD from NetFlix on laptop. 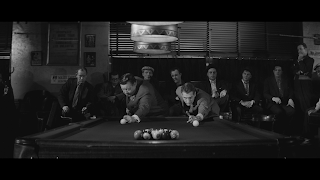 Most of the first 45 minutes or so of The Hustler is a series of straight pool games between up-and-coming pool hustler Fast Eddie Felson (Paul Newman) and established legend Minnesota Fats (Jackie Gleason). Felson is young and brash and filled with a massive self-confidence as well as ridiculous skill on the pool table. Fats has the confidence of years of being unbeaten and the faux genteel habits of a gentleman. The play for more than 25 hours, with Felson up $18,000 (about $150,000 today) at one point and end only when Felson is all the way back down to his original $200. At the end of this marathon pool session, Felson is punch drunk and barely able to stand while Fats looks as fresh as he ever has. When Fats calls it a game, Felson collapses.

All of this takes up a third of the film, but its time well spent. It establishes just about everything we need to know about four of the five major players in the film. We learn that Fast Eddie Felson is that young, brash man who has a singular talent but almost nothing else. He drinks far too much, smokes too much, and is constantly in danger of crashing. We learn that Fats is as much smoke and mirrors as he is pool talent—that part of the reason he is capable of winning back everything he’s lost is simple endurance and an unwillingness to quit until he has.

We also spend a little time with Charlie (Myron McCormick), Eddie’s “manager” and part-time plant to set up marks for hustling. Charlie is a more nervous and more careful than Eddie, and doesn’t take it well when Eddie leaves, having lost everything but their stake in the marathon game. We also encounter Bert Gordon (George C. Scott). We don’t get a great deal of information about Bert, but we can gather that Bert’s business is on the shadier side of the street, mostly playing poker. He merely watches the meteoric rise and equally meteoric fall of Eddie Felson, drinking it in and storing it up for later.

The one person we don’t meet in these first 45 minutes is Sarah (Piper Laurie), the part-time college girl with the drinking problem and the pronounced limp. Eddie meets her in a bus station where both are sitting because they have nowhere else to go at that time of the day. They find each other again, and she pushes Eddie away. The third time is the charm, and the two become an alcoholic item. It’s a rocky affair. At one point she tells Eddie that all they really have between them is alcohol and sex, and that very much seems to be the case.

I didn’t understand The Hustler until just after the middle of the film. Eddie goes to a bar and hustles a guy for $100 playing 9-ball and has his thumbs broken as a reward. I’m not sure why I didn’t see it before this point, but it was here that I realized that The Hustler is a film noir that came 10 years too late. It’s the only way for me to make sense of what happens and more importantly, the only way to make sense of these broken people. And they are broken. When Eddie has his thumbs snapped, it’s actually a positive for him and for Sarah, who seems to give up drinking and the two start what looks like a real relationship. But always in the back of Eddie’s mind is that desire to get back to Minnesota Fats and play for all that money again. Fats is broken, too—he’s as much money for show as he is skill. He’s a façade. Beating Eddie through sheer endurance isn’t about the money, but about the image of being the unbeatable player who no one can get the best of.

And so The Hustler is a film about these broken people, all wanting something and afraid that they’re going to lose it. It’s as much about this fear, this willingness to risk everything for what doesn’t matter and an inability to risk even the smallest thing for what does. Oh, it’s a dark, dark film and it never shies away from its own darkness.

If you’re gathering that I liked The Hustler, you’d be correct. I did like it. I liked it because it embraces that shadowy darkness and decides to call t home. The Hustler lives in darkened pool halls and back rooms, scrounging up a game for a couple of bucks and spending the winnings on bottles of beer and cheap scotch. Newman, who has the same smile here he did in later films like Cool Hand Luke and The Sting, is smart enough to use it differently. It’s touched with a taste of the sardonic here, the smile of a man who knows he is always on the razor-thin edge between success and complete destruction.

The Hustler is must-see for a reason. Your reason may ultimately be different from mine, but if you watch this, you’ll find your reason here.

Why to watch The Hustler: Paul Newman, Jackie Gleason, Piper Laurie. You need more?
Why not to watch: It’s darker than you realize.