Off Script: The Ugly

Film: The Ugly
Format: DVD from personal collection on laptop. 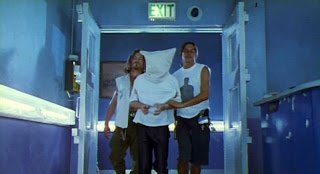 Until the release of the Lord of the Rings films, I had no idea that New Zealand even had a film industry. I mean, I know they did because there’s a national cinema everywhere, but I was relatively unaware of films from New Zealand. In my defense, if you look up New Zealand film, there aren’t a whole ton produced there until relatively recently, which is odd considering the fantastic landscape a filmmaker has to work with. I was unaware that then 1997 film The Ugly was a Kiwi film. Of course, until I located the Fangoria list, I didn’t know this film existed at all.

This is an odd little number of a film. It wants desperately to be a real horror movie, but had evidently very little budget, and so used some worn down locations for filming and made use of what make up and special effects it could to get the point across. It feels very much like a freshman effort, a film that has a few good ideas and a nice film school trick or two, but doesn’t have the complex plotting or pacing of a more experienced director and writer. As it turns out, it is the debut full-length writing and directing credit for Scott Reynolds.

Serial killer Simon Cartwright (Paolo Rotondo, who looks vaguely familiar) has been institutionalized. He has requested a re-evaluation by a psychiatrist named Dr. Karen Schumaker (Rebecca Hobbs). He wants to be deemed cured, despite his string of twelve murders. Schumaker recently made a name for herself in another high-profile murder case, making her the psychiatric flavor of the month. The publicity is always good, of course, but for her, the case is a particularly interesting one. Simon is interesting in the serial killer world, because his victims had nothing in common with each other, save that they encountered Simon Cartwright. He killed people he knew, people he didn’t, men, women, whatever.

The staff at the mental hospital (remember, low budget) consists of three that we actually see. There’s the director, Dr. Marlowe (Roy Ward) and two orderlies (Paul Glover and Christopher Graham). Marlowe is an odd duck, a little too prim to be taken that seriously. The orderlies are less mental health workers and more thugs, and take it upon themselves to torment Simon at every turn.

The film consists in the main of interviews between Dr. Schumaker and Simon, who takes her through his childhood and a few of his killings. The childhood is pretty standard fare. His parents were separated and his father tried to get custody. His mother was something of a monster and told him horrible stories about his dad. In reality, Simon’s father was independently wealthy. When he finds out, through the intercession of a childhood friend named Julie (Vanessa Byrnes), his mother reacts by banning the girl from his presence. He reacts by killing his mother and burning down the house. Thus starts his killing spree. There’s also quite a bit about him being bullied by other, larger kids and him being dyslexic. Like I said, pretty standard stuff.

What gets interesting is that eventually Simon claims that the killings aren’t really his doing, but are caused by something he calls the Ugly. This evidently stems from a particularly nasty beating he received that marred his face for a time. He has a weakness for those with disabilities, and in fact is show sparing the life of a potential victim when he discovers she is wearing a hearing aid. In Simon’s world, the Ugly forces him to kill because it will not leave him alone until he does. It manifests itself as his past victims, meaning that the more he kills, the more the Ugly becomes unbearable to him, and the less he can resist the urge to kill just about anything and anyone he comes across.

The Ugly is not a great film, or even a really good one. It’s an interesting film, though. There are a lot of ideas going on here, but they never really gel that well together. It’s evident early on that Simon is nowhere close to being cured, which makes his plea for a new evaluation kind of silly. It’s equally silly that Dr. Schumaker would continue to come under that pretense instead of the more simple and obvious pretense of wanting to study this strange character. In fact, that would have been a better premise from the beginning.

There’s also not really any clear distinction between the Ugly and the past victims, although it’s evident in Simon’s mind that they are different things. We don’t see this, and so the one is more or less an extension of the other, or part of the other. It’s unclear, and while the makeup effects on his past victims are pretty good, it’s never really clear what they are or what they are doing.

It’s also far too straightforward to really be much more than a decent little spook film, and it’s not even that until the end when we actually get to see his former victims around him. Simon’s motivations are right out of Psychology 101. Like I said, it feels (and is) very much a freshman effort.

The strongest part of The Ugly is the ending, which is quite good. Once we get to what Simon really sees, and the evidence that Dr. Schumaker sees it too, we’ve got something pretty interesting, but this happens at the end, and there’s not nearly enough of it in the first hour or so of the film. The whole bullied kid thing has been done to death, as has the mean and overbearing mother. Something more interesting here would have helped the film quite a bit.

All in all, The Ugly isn’t a bad film, but it’s not a great one, either. It tries a little too hard and plays to some obvious tropes, and those things pull it down into the average range. A good effort and worth seeing, but not really worth much more than a quick watch.

Why to watch The Ugly: A very fun ending.
Why not to watch: A lot of it is just too simple.