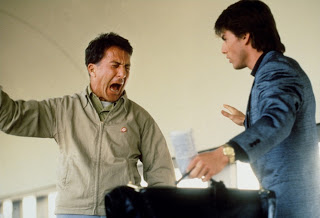 It’s a cliché that the best way for an actor to win an Oscar is to play a character who is badly broken either mentally, physically, or emotionally but still accessible as a person and a character by the audience. To quote Robert Downey, Jr. in Tropic Thunder, you never go full retard. I can think of no better example of this than Dustin Hoffman’s Oscar-winning performance in Rain Man. The film was a phenomenon and is still a cultural touchstone in a number of ways. Despite the fact that I’d only seen it once before today and my wife had only seen it once, too, it’s one of the most frequently referenced films in my house. “I’m an excellent driver,” is a common phrase, and anyone using the word “definitely” can rightly expect to have “not my underwear” quoted as a follow-up.

Charlie Babbitt (Tom Cruise) is a somewhat shady businessman dealing in exotic cars. He’s playing fast and loose with his customers and the EPA. He owes a great deal of money, can’t get his vehicles through their emissions checks, and is behind on a loan. When the news of the death of his estranged father arrives, it’s something of a mixed blessing. After all, Sanford Babbitt had millions, and Charlie is the only likely inheritor.

But he doesn’t inherit. Charlie, along with his girlfriend/employee Susanna (Valeria Golino) attend the funeral and the reading of the will. Charlie gets the car that caused the rift and also his father’s prized rosebushes. The bulk of the $3 million estate goes into trust. This trust turns out to be an extended care facility. It is here that we meet Raymond (Dustin Hoffman), who we soon learn is high-functioning autistic, has a staggering memory and ability with numbers, and is Charlie’s older brother. Desperate for the money that will keep him afloat, Charlie takes Raymond out of the facility, hoping to set up a custody battle, and thus inherit his own share of his father’s estate.

Of course, dealing with someone with autism isn’t easy. Raymond is a creature of intense habit, and pulling him out of the facility causes a great number of problems. He won’t fly, since every airline (except Qantas, he claims) has had fatal crashes. So they drive. But Raymond will only drive with the top down and won’t leave his hotel room if it is raining. He needs the same foods on specific days of the week and must watch particular television shows every day.

The point of the film is not Raymond, though, but Charlie. Charlie (much against the type of Cruise’s typical role) is a bastard. He is impatient and dismissive of his brother to the point that eventually Susanna leaves the two alone since she is no longer willing to be a part of what she considers cruel treatment. Slowly, Charlie starts to come to terms with his brother and to accept him for who and what he is. Most importantly, he discovers that Raymond is real person behind the Rain Man, his imaginary friend as a child who would come and protect him.

What works here is the speed of this transformation. Charlie genuinely appears to start appreciating Raymond for being Raymond, but not before he takes his brother to Vegas and essentially scams Caesar’s Palace out of close to $100,000 by counting cards at blackjack. It’s exploitative and perfectly in character. As the film nears its conclusion, though, it’s evident that Charlie has really come to love his brother and genuinely cares for him rather than simply caring about what Raymond might be able to do for him. At film's end, he's softened some, but he's still kind of a dick.

In truth, Rain Man feels a lot like a movie of the week in a number of ways. Autism was only beginning to be barely understood in the late 1980s and was still a complete mystery to most. I’d go so far as to suggest that for many people, Rain Man was a first exposure to the condition. The change in Charlie Babbitt is just as much a function of that movie o the week syndrome as the plot itself. It works within the context of the film, of course, but it’s also not really in doubt for most of the running time.

However, despite it feeling like a message movie that should be playing on the Hallmark channel, it’s really, really good. The performances are top of the line. Cruise was skipped for a nomination, but in many ways, this is his best performance. Charlie Babbitt has a lot in common with his characters from, say, Top Gun and other films from the ‘80s, but there’s a real difference here. Cruise always plays arrogant really well, but there’s a streak of immorality rather than boyish misbehavior here. Babbitt is a harder and harsher character than his typical role, and he’s completely at home in it.

The real standout is Hoffman, though. He’s just about perfect, and no one was going to take that Oscar that year but him.

Rain Man might be a bit sappy at times, a bit too emotionally on the nose, but it still plays well, particularly with its downbeat/upbeat, realistic ending. As an added bonus, it also has one of my favorite film soundtracks.

Why to watch Rain Man: Dustin Hoffman’s performance and Tom Cruise playing against type.
Why not to watch: It feels a bit movie-of-the-week-ish.