Off Script: The Asphyx

Film: The Asphyx
Format: Streaming video from NetFlix on laptop. 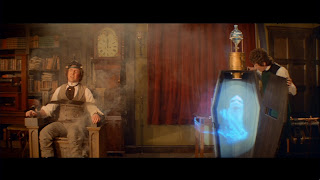 There is a particular joy that is typically denied the horror fan: period pieces. Sure there are horror films set in the future, especially in space, but there’s something particularly entertaining about seeing the supernatural world depicted in a Victorian setting. Such is the world of The Asphyx, an odd little British film that rather goofily explores the razor-thin line between life and death.

Enter Sir Hugo Cunningham (Robert Stephens), a man of wealth, philanthropy, and science who conducts experiments of “psychical research.” He arrives home with his new bride-to-be, Anna Wheatly (Fiona Walker) to meet the rest of his family. These are his son Clive (Ralph Arliss), his daughter Christina (Jane Lapotaire), and his adopted son Giles (Robert Powell). We also learn of his current investigation. He and his friend Sir Edward Barrett (Alex Scott) have been experimenting with photography. Specifically, they have been taking pictures of people at the moment of their deaths. In each case, they notice an odd smudge near the person, and they determine that this smudge is photographic evidence of the soul leaving the body.

Cut to the five people on a river bank with Sir Hugo playing around with, essentially, a motion picture camera of his own design. Giles and Christina paddle by in a boat and he records their passage. Then, in one of the most entertainingly silly scenes of the film, Clive and Anna row up. Clive, standing in the back of the boat like a gondolier, is struck in the head by a tree branch and falls into the water. Anna evidently tumbles over the side in sympathy. Both are drowned. However, the smudge shows up again, and this time, it is evidently moving—and not leaving the body, but approaching it as death nears.

Sir Hugo decides that this is physical proof of an asphyx (pronounced exactly like a repair for someone’s hinder: ass-fix), a spirit of the dead. Filming a public hanging as a sort of protest, he uses what he calls a “light booster” to help the film record, and actually traps the victim’s asphyx in the light. The hanged man struggles and lives until he turns the light off. Of course, this twigs an idea in Sir Hugo—if he can trap an asphyx temporarily, he might arrange to trap one permanently, and anyone whose asphyx is thus trapped would become essentially immortal.

It’s a great idea for a story and a film, and it’s one that could probably stand to be remade with legitimate special effects instead of the goofy stuff we’re given here. The asphyxes that we get to see are blue, less complete versions of the Slimer ghost from Ghostbusters, probably decent for 1973, but pretty laughable 40 years later. This is easy to forgive, though, for a film that follows a great thought for an intriguing plot. There’s a lot of H.P. Lovecraft in this story, and that’s one of the things that really makes it work.

Like a lot of good horror, it’s also a morality tale. Sir Hugo wishes to trap his own asphyx and thus make himself immortal. He tells himself that this is all for the good of humanity—those with power and wealth should take it upon themselves to guide the course of history for the positive, and immortality would allow him this power throughout the ages. He tempts Giles in the same way, promising the same immortality for him. He also agrees to consent to the marriage of Giles and Christina (remember, Giles is adopted) if Giles will help in the experiment. Naturally, with the prospect of eternal life for himself and his love as well as the tremendous power that will be his, Giles is quick to agree.

But every morality tale needs things to go badly wrong. It doesn’t work as a lesson for the rest of us if Sir Hugo is successful and there are no problems or repercussions. So, of course things go terribly wrong in the attempt to immortalize Christina, and thus with Giles as well; there’s something comically awesome about Christina’s life hanging in the balance because of an immortalized guinea pig being left free to walk around a lab at will because no one thought to cage it. Even funnier is the fact that they develop multiple ways to trap an asphyx but never repeat one—they know they have ways that will work, but experiment with a guillotine when it comes to Christina. And immortality proves to be something that no one should wish for, as we learn at the end of the film.

The Asphyx is played with all of the earnestness of a Shakespearean drama, which makes it a little hard to take at times. It also contains some of the most ludicrously funny make up work I’ve seen in any film. Sir Hugo doesn’t so much look like an old man as much as he does someone getting a facial treatment with cooked oatmeal.

Director Peter Newbrook was far better known as a cameraman and second-unit director. The Asphyx was his only title as a director, but this is a man who worked on films like Lawrence of Arabia and The Bridge on the River Kwai. He certainly had a sense of the grand and a taste for the epic. The Asphyx isn’t that in anything but its intent. This is not a great film, or a scary film, or even a really worthwhile morality tale (I mean, how many of us have the medical or technical knowledge to legitimately pursue immortality?), but it is entertaining for what it is. It’s fun, and sometimes that’s enough.

Why to watch The Asphyx: It takes its weird little idea and runs as far as it can with it.
Why not to watch: I’m not sure it could be any goofier.