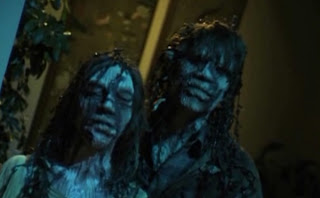 It seems that whenever I watch and write about a horror film from the late 1970s or 1980s, I reference Video Bug, the video rental place we went to when I was a kid. Creepshow, the 1982 horror/comedy anthology based on the look and feel of old E.C. comics like The Haunt of Fear is yet another film that I was introduced to through the magic of video rental. When? I don’t really know. Sometime between 1982 and 1985, for certain. I have fond memories of Creepshow, as should most people who have seen it.

I have it on very good authority that the sequels, particularly the third one, are crap, but the first one really is a lot of fun. Part of this is the direction from George Romero, who really made a lot of effort to make Creepshow look as much like the comics it’s based on as possible. Another major plus is the presence of Stephen King. King not only takes the main role in one of the five stories, he also wrote three of the five episodes specifically for the film and adapted a fourth from one of his previously published works. That gives this film a lot of credibility, and it’s credibility that really pays off.

The biggest problem with horror anthologies is length. Creepshow is about two hours long, which includes the bumper story at the front and back as well as the short transitions from one story to the next. What that means is that on average, you have about 20 minutes to set up a premise, make with the spooky stuff, and give the audience the big payoff before heading on to the next one. This means that some of the stories, particularly the first one, get pretty short shrift. It’s a story that very well could have been blown up into a full-length horror film, and instead, it runs maybe 18 minutes. That’s always the problem with anthology films, and with horror, it’s often not enough time to really set the proper mood for the scary fun.

One thing that is really surprising is the cast. There are some pretty big names here, both from film history and people who hadn’t quite hit yet. I had forgotten (or, more likely, never knew) that Ed Harris (with hair, no less!) was in this about a year before he really hit big with The Right Stuff. We also have Leslie Neilsen, Ted Danson (who was just about to hit television with Cheers), Adrienne Barbeau, Hal Holbrook, and E.G. Marshall here as well. The stories go like this:

Father’s Day: A family meets every year on Father’s Day at the behest of crazy old Bedelia (Viveca Lindfors), who killed her father on that day seven years previous. This time, though, Daddy decides he really wants his Father’s Day cake, and climbs out of the grave and starts killing everyone until he gets it. This one probably should have been longer. It moves too quickly, and suffers. It’s the weakest of the five.
The Lonesome Death of Jordie Verrill: Stephen King plays the title character, a bumpkin who discovers a meteor on his property. The meteor proves to be filled with an alien plant that soon takes over Verrill’s house, farm, and Verrill himself. This one is entertaining and about the right length, but isn’t as much fun as the three that follow it.
Something to Tide You Over: Richard Vickers (Leslie Nielsen) has discovered his wife Becky (Gaylen Ross) is having an affair with a man named Harry Wentworth (Ted Danson). In revenge, he buries the pair up to their necks below the high tide line of the sea and happily awaits their drowning. Of course, since this is a horror anthology, you can bet that Becky and Harry aren’t going to stay dead. There’s a lot of twisted humor in this one, making it my second favorite.
The Crate: The longest of the five stories (at nearly 40 minutes) is also the best. A long-missing crate is discovered at a university. This crate houses a feral creature that pulls anyone who gets close into it and kills them horribly. Henpecked professor Henry Northup (Hal Holbrook) decides that this creature might be a good way to get rid of his embarrassing and alcoholic wife Wilma (Adrienne Barbeau). There’s a lot of joy in this one, including some imagined deaths of Wilma, as well as the fun gore of the feeding creature. Creepshow would be worth it for this one even if the other four stories sucked.
They’re Creeping Up on You: Insectophobe and germophobe Upson Pratt (E.G. Marshall) discovers that his hermetically sealed apartment isn’t quite as safe from creeping cockroaches as he thought. This one is also fun and features a great performance from Marshall, but actually feels a little bit long for the story it tells.

Creepshow isn’t that scary, but it really isn’t supposed to be. It’s supposed to be fun, like a carnival spook house. You get a couple of good jump moments, but nothing that will give nightmares or gross anyone out too much. It’s meant to be not even creepy or disturbing, but funny in a “scary” way. It succeeds at this perfectly. Creepshow is pure camp and pure cheese, which is all it ever wanted to be. It’s great when a film sets out to do something and manages to pull it off perfectly.

One of the great things about this is just how much it is designed to look like the comics that inspired it. Specific moments are surrounded by comic book panel effects, and lighting changes are dramatic and over the top, suddenly shifting to morbid red or dark blue when something dramatic or scary happens.

Creepshow is an entirely fun homage to the great horror comics of the past. It’s incredibly entertaining and totally worth seeing, even if it’s really nothing more than ‘80s cheese.

Why to watch Creepshow: It’s ridiculously fun.
Why not to watch: It’s also pretty hokey.