Film: Festen(The Celebration); Idioterne (The Idiots)
Format: DVD from NetFlix (Festen) and video from The Magic Flashdrive (Idioterne), both on laptop.

When Lars von Trier and Thomas Vinterberg created the Dogme 95 idea, the point was to get back the most basic of ideas in filmmaking. Films were to be made quickly, without special effects, without massive budgets, without even much in terms of lighting, makeup, or costuming. The whole point of the movement was to hammer home the point that great and important stories could be told without all of the tricks that the audience has grown used to seeing. In short, Dogme 95 is about the power of storytelling rather than the power of technology. It makes some Dogme films difficult to watch, but it’s a noble idea if nothing else. 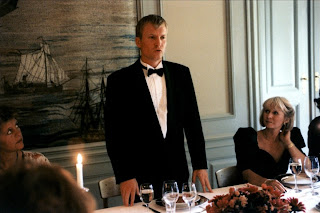 Festen (The Celebration) is the first Dogme 95 film ever released. To sum the film up as quickly as possible, a family gathers to celebrate the 60th birthday of the family patriarch and everything goes to hell, hits bedrock, and starts mining. It becomes evident that there is a lot of bad blood right away and a lot of baggage that will be unpacked as the film progresses.

The family patriarch is Helge (Henning Moritzen), who runs a large hotel/resort. We learn very quickly that one of his daughters has recently killed herself in the resort. Brother Christian (Ulrich Thomsen) and sister Helene (Paprika Steen) attended the funeral, while brother Michael (Thomas Bo Larsen) did not. He is very much the black sheep of the family, filled with a particular anger at everyone, expressed mostly at his wife Mette (Helle Dolleris). Nothing is right in his world, and in fact his father did not bother to reserve a room for him or his wife and kids, so thorough is the familial rift.

Everything changes and changes hard about 35 minutes in when Christian gives his initial speech at the family dinner. In a completely matter-of-fact tone, he announces to the gathered crowd that his father regularly abused him and his late sister when they were children, repeatedly raping both of them throughout their childhood. It’s almost as if no one hears what he says, because everything continues as normal, Helge’s senile father (John Boas) offering his own toast (something he does more than once). But it’s also evident that what many are taking as stress or a terrible joke is the truth. Christian’s boyhood friend Kim (Bjarne Henriksen) is the cook at the resort, he when Christian attempts to leave, it is Kim who forces him to stay and finish the battle he has started.

Oh, but we’re hardly done here on this hit parade of social and familial ills. It’s not too long into the dinner party when Helene’s boyfriend arrives. That wouldn’t be a big deal except that her boyfriend is named Gbatokai (Gbatokai Dakinah), who sounds American and is black. And that’s a problem because brother Michael is a glaring racist. And the guests can’t leave because Kim has had the wait staff steal everyone’s car keys to keep them there.

Oh, it all goes to hell. Christian accuses his father of murdering the dead sister, and one of the young servers picks this time to Michael that he got her pregnant. He doesn’t much react until she tells him that he is as sick as his father, and he slaps her until she collapses. Eventually, sister Helene reads the suicide note of her sister, bringing everything to a head.

Festen is an ugly film, but don’t mistake for a second that this means I don’t think it’s important or worth seeing. It’s ugly, because life is often ugly. While the baggage that this family carries is extreme and seems never to stop, it’s only extreme in what it is, not that it exists. Every family has these explosions, and every family has grudges and battles that are fought for years. Every family has petty rivalries and jealousies, and people who hold unpopular opinions or say things that are inappropriate. I look at my own extended family, and while there’s no sexual abuse that I know of, there are certainly little battles that come out now and then and cause not a lancing of old wounds but only open old wounds. But nothing like this. This is as close to a familial hell as I have ever seen.

A great deal of the importance of Festen is that it was the first of the Dogme films, but it’s not long before the manner of the film’s creation becomes secondary, and then tertiary to what the film presents and the story it tells. Twenty minutes in, and I didn’t care that there were no special shots or expensive cameras or impressive stunt work. I only cared about what would happen next. It seems to me that this is the actual intent of the Dogme idea—that it is possible for a story to be so good that everything else about the film becomes secondary. In that respect, Festen is a complete success.

This is not a happy film or one that I would relish watching again, but it’s one that I certainly appreciate having seen. There are a number of things hinted at here—Michael’s rampant racism, for instance—that get short shrift, but I rather appreciate that. These are the sorts of things that pop up at such terrible gatherings and make themselves known without being the central focus of the evening. 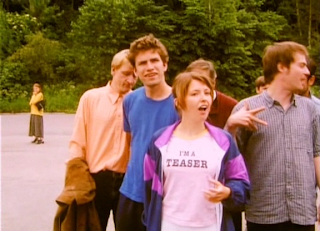 And then we have Idioterne (The Idiots), which uses the same basic idea of film philosophy as Festen and gives us as different a film experience as can be imagined. As much as I found a lot to really appreciate in Festen, I found almost nothing in Idioterne. Thomas Vinterberg gave us a brutal family drama of singular power in his film. Lars von Trier instead gives us artistic pretension and assholery disguised as something meaningful.

The idea is that a group of people led by a guy named Stoffer (Jens Albinus) begin searching for what they call their “inner idiot.” In practical terms, this means that they essentially act as if they are developmentally disabled, as if they have severe mental disabilities. They do this sometimes in private, where they live in a sort of communal compound. They also go out in public and essentially act up, doing whatever they feel like because they are pretending to be severely disabled. It’s like a piece of performance art, and it’s also like an extended fraternity initiation prank.

It’s also pretty awful, and mostly because it seems so entirely false. It’s difficult to tell at any point if they are taking this “spassing” seriously or if it really is something like an extended joke made in extremely bad taste. It’s as if they are trying to be serious about this as a sort of art project to see what happens if they completely eliminate all of their inhibitions, but at some level they are constantly analyzing what they are doing. They are unable to truly experience what they want to experience because in a meta sense, they are also constantly consciously aware of what they are doing and why they are doing it. They aren’t so much removing their inhibitions as they are giving themselves permission to act out in whatever way they feel like in the moment.

Into this mix we add Karen (Bodil Jorgensen), who appears to immediately latch onto this idea of spassing and takes to it without much question. As the film rolls on, we discover a little of what has gone on iin her life to make this sort of life attractive to her. However, by the time we get there, I’ve really lost interest in the whole thing.

When I was an undergraduate many, many years ago, I majored in English, which is sort of the catch-all major for people who don’t know what they hell they want to do. One guy I had a number of classes with styled himself as a poet. He had a certain level of talent, certainly more than I have. Often, he seemed less interested in writing poetry than he did in calling himself a poet. Once, at a party, he had a fight with his girlfriend. She stormed out and I watched him count slowly to ten, waiting for the right cinematic moment to run out after her, barefoot into a foot of snow. It wouldn’t have been right to put his shoes on or to run after her immediately—he needed it to be an artistic, meaningful “moment.” Idioterne reminds me of this.

All of this is self-referential. It’s not so much art for art’s sake, but art for the appearance of art’s sake. When you lay over the top of this the idea that a great deal of what they do feels like bits in a sketch comedy show, it all just turns out kind of ugly and cruel. It comes across as something malignant. These people aren’t trying to get in touch with something; they’re genuinely making fun of people with severe mental problems. It’s a sort of mentally retarded version of Borat. (I mean that in the clinical use of the word, not the pejorative meaning.)

In this case, the fact that this was a Dogme film didn’t affect the results that much, either. This film would be just as ugly and mean spirited with perfect lighting and camera work and with a decent effects budget. It’s a nasty film espousing a nasty ideology.

Why to watch Festen: Film pared down to its most basic.
Why not to watch: Another story in which almost everyone is an unrepentant asshole.

Why to watch Idioterne: A completely unique idea.
Why not to watch: If you think the people in Festen are assholes, wait until you see this one.