Michael Haneke is a strange director in a lot of ways. I don’t know if I like his work or not. In that way, he sort of reminds me of Darren Aronofsky. I love Aronofsky’s work, but I always get the feeling that I’m not sure I want to see it again. Haneke also reminds me of the author J.G. Ballard. Nothing good ever happens in Ballard’s work, and nothing good happens in Haneke’s work, either. Haneke tends to deal with the uglier side of human emotions, the parts we don’t like to talk or think about. He winds people up in unpleasant ways and forces them to fight for their very souls. In that respect, he also reminds me of David Lynch. A good deal of Haneke’s work is exposing the rot underneath the surface of everyday life. 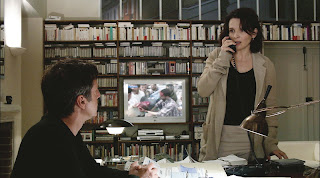 Cache (Hidden) presents a world very much like that of Haneke’s other films. We have, on the surface, a fairly normal upper-middle class Parisian family. It consists of Georges Laurent (Daniel Auteuil), the host of a television program about literature; his wife Anne (Juliette Binoche), a book publisher; and their son Pierrot (Lester Makedonsky), who is about 12 and swims competitively. Out of the blue, the family starts receiving unsolicited videotapes that show that their house is under surveillance. More disturbing, the tapes start showing up with drawings. These drawings look as if they were created by a child. Most show a young child spitting up blood, but one shows a rooster being decapitated.

Neither Georges nor Anne seem to know anything about the tapes, the drawings, or any reason for them to have started showing up. However, it soon becomes evident that Georges is holding back. We see some flashbacks and dreams from him that seem to mirror the drawings—a young man coughing up blood and a rooster having its head cut off. When a tape arrives that shows the house that Georges grew up in, he starts to figure out who might be behind things.

That person is Majid (Maurice Benichou). Eventually, we learn the whole story. Majid was the son of Algerian workers who were in the employ of Georges’s parents when he was a child. Both were evidently killed in a riot, which caused Georges’s folks to strongly consider adopting the boy. Ferociously jealous of the attention given to this outsider from his family, the six-year-old Georges plots to make Majid out in the worst light possible, which involves killing the family rooster, which turns out to be the final blow in the decision to adopt. Instead of finding a family, Majid is sent to an orphanage.

And now Georges is in a terrible position. On the one hand, he and his wife feel threatened by the tapes and the surveillance. Additionally, the situation has put a terrible strain on their marriage, especially because Georges holds back almost all of the information about his relationship to Majid until he cannot possibly resist, which causes Anne to mistrust him and to wonder what else he might be hiding.

And then Pierrot goes missing.

Cache is a very strange film in many ways. It bills itself as a thriller, and there are certainly elements of that genre here, but the film plays much more like a domestic drama than it does a thriller. It’s really not that thrilling. Even the disappearance of Pierrot, which is mildly terrifying to contemplate for any parent, resolves itself too quickly for any real tension to be built up in that scenario. And yet this is followed by one of the most truly shocking moments I have ever seen in a film, a moment that I will not reveal here since it truly needs to be experienced. This moment gives us the full story of Georges’s past, which gives us something of a resolution, but it still somehow feels unfinished. There’s a significant lack of tension here despite the situation, and that certainly seems like a failing for a film that wants to be thrilling.

So what is this about? Is it hinting at the ugly relationship France has had with Algeria for years? Perhaps, and even if that wasn’t the intent, it’s almost impossible not to go there. Is it about this strange stress being placed on the Laurent family and causing the family structure to break apart into its ugliest and basest emotions? Almost certainly this is part of Haneke’s intent with the film. The reality is that the situation happening to the Laurents causes them to behave in ways that attempt to preserve themselves while damaging each other. Do they get so wrapped up in the mystery that they lose sight of everything else? Do we as the audience? I think so.

The real question is what it all means. For that, I think it’s critical to go to the title of the film: Cache. The English title Hidden doesn’t carry the same weight as the original title of the film. Certainly there’s a great deal of things hidden in the film, but “cache,” comes with the meanings both of the hiding place as well as that which is hidden. In both cases, it refers to Georges—the memories and past sins he has locked away as well as himself, the last remaining storage place of those dark deeds.

So who is sending the tapes? Majid denies sending them. Majid’s son (Walid Afkir) denies it, too. The easiest assumption is that one of them is lying and are behind the surveillance. But if we assume that they are both being honest, we don’t have a lot of possibilities. I like to think that Georges is doing it himself due to his guilt about his treatment of Majid. But that’s just a guess.

All in all, it’s pretty typical Haneke. It’s brilliantly made, engaging, weird, and uncomfortable. And like most Haneke, I’m likely one-and-done with it. 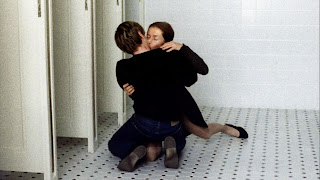 In La Pianiste (The Piano Teacher), the emotions are much more on the surface, which feels unusual for Haneke, or at least the Haneke with which I am familiar. In fact, we start with a fight between mother and daughter. The daughter, who appears to be in her late 30s or early 40s is Erika Kohut (Isabelle Huppert), the eponymous piano teacher. She and her mother (Annie Girardot) have a violent and turbulent. When, in the first couple of minutes, Erika returns home late from giving piano lessons, her mother empties Erika’s purse, discovers something she has purchased and destroys it, while Erika pulls out a few clumps of her mother’s hair.

Despite this opening, La Pianiste, like much of Haneke’s work, is about repression, and Erika Kohut may well be the most repressed character he’s ever had to deal with in one of his films, and that’s saying a lot. She appears to be completely repressed by her domineering and dominating mother, and this is a frustration she takes out on everyone else in her life, including herself. We see her being rude and short with students who don’t measure up to her standards, a set of people that includes all of her students. She is dismissive of anyone who shows interest in her and her playing, particularly in the young Walter Klemmer (Benoit Magimel) who wants to study under her.

In addition to her mental, emotional, and sexual repression, Erika is also ferociously jealous of the potential success of anyone else. She sabotages one of her promising students by putting broken glass in the girl’s coat pocket, cutting her hand and preventing her from playing a major recital. Eventually, she also begins a relationship with Walter, and this almost immediately turns to the bizarre, with her demanding the fulfillment of sexual fantasies that the young Walter is unwilling to perform. Additionally, she frequently frustrates and humiliates him, much in the way her own mother does her.

This is dark stuff. At times, it’s sort of fascinating just to see how far she will sink, and it makes me fairly certain that Steve McQueen watched this film on a continuous loop when he made Shame a couple of years ago. But it also becomes too much at times, not merely going to places that are ugly and repellent, but wallowing there for a long, long time. It’s never titillating and always uncomfortable at best. That’s the point, of course. The film would be sort of meaningless if the sex in it were in any way attractive. But it is hard to take, especially if you aren’t the type who likes pain, blood, and bodily waste involved in your sex life.

It is, though, a brilliant portrait of repression and the strange flowers the bloom because of it. Erika’s actions—her voyeurism and public urination at a drive-in, her self-harming behaviors—are all symptoms of the complete mental and emotional domination from her mother. While difficult to watch at times, it’s also damn interesting. It’s interesting like a train crash, or like television shows like “Hoarders.” One watches not specifically out of interest or clinical curiosity, but because sometimes, the freak show is what makes the rest of us feel normal.

Typical Haneke? Yep. One and done, but it’s as impressive as it is difficult to get through.

Why to watch Cache: Dark secrets are inherently interesting.
Why not to watch: For a psychological thriller, it’s mostly psychological without a lot of thriller.

Why to watch La Pianiste: Disturbing, dark, and brilliantly upsetting.
Why not to watch: It’s holy shit creepy.