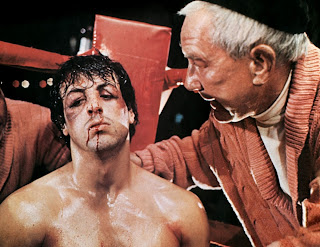 When you think about Rocky, it’s likely that you think about the fight at the end of the film or the fantastic training montage that leads up to the fight. That’s natural, because it’s a film about boxing and about a guy who gets a once-in-a-lifetime chance. It’s easy to forget the first hour of the film that sets up those scenes at the end. It’s easy to forget, in the career he had in stupid cop and revenge films following this breakthrough role that Stallone is a smart guy and a capable actor (he did, after all, write the screenplay). With the jingoistic and maudlin series of sequels that followed the original film (Rocky V, anyone?), it’s easy to forget just how damn good the original Rocky really is.

Rocky Balboa (Sylvester Stallone) is a bum of a fighter and a part-time legbreaker for a cheap loanshark named Gazzo (Joe Spinell). We start with one of his fights, which he wins. He takes a beating and a cheap headbutt, and walks away with the grand prize of about $40. The next day, Mickey (Burgess Meredith), who trains boxers at the club Rocky uses, kicks him out of his locker. Rocky and Mick have never had a good relationship because, as Mick tells him, Rocky had the makings of a contender but wasted his talent.

Rocky is interested in Adrian (Talia Shire), the sister of his friend Pauly (Burt Young). Adrian works at the neighborhood pet shop and is almost aggressively shy. In the first hour of the film, we learn all about Rocky. He’s not that bright. He loves animals. He’s good-hearted, and won’t break someone’s thumb for Gazzo if he thinks the guy doesn’t really deserve it. He’s basically a palooka. We get the sense that he wins his fights not through skill or quality boxing, but by being able to withstand more of a beating than his competitor.

Meanwhile, Apollo Creed (Carl Weathers), the heavyweight champion of the world, is planning his next fight. With about a month to go before the fight, his opponent comes up lame, and there are no other good opponents for him. Since it’s the American bicentennial, he decides that the gimmick that will make the fight work is to give a title shot to a complete unknown. Based on who we’ve spent so much time with already, it’s hardly a shock when the title shot goes to Rocky Balboa.

And then we get the aforementioned training montage, a bit of soul searching, and the big fight at the end. These are the parts of the film that everyone remembers—Rocky going into the meat freezer Pauly works in to beat up slabs of beef, drinking raw eggs, and the final triumphant run up the steps. People tend to remember the fight, too—Rocky wearing Pauly’s company logo on his robe, the trading of punches back and forth, Rocky’s eye swelling shut. And I do not disagree that these parts of the film are great and worth seeing. And while they’d still be great no matter what, we wouldn’t care at all without the first two acts of the film that make us care about Rocky and Adrian and Mick, and even Pauly.

For me, the scene that really makes the film work happens just after Rocky gets the title shot offer and Mick shows up at his apartment. His dignity demands that he come at this as the one offering his services, but it quickly becomes evident that he’s begging Rocky to take him on. He knows exactly why Rocky is angry at him. He knows that this freak chance for Rocky is his one chance to do anything really great in the boxing world, and he’s desperate for it. It’s a beautiful scene, one of the best of Burgess Meredith’s long and excellent career. And he’s matched moment for moment by Stallone.

The big fight is the lowest point in the film in a significant way—the fight choreography is exciting but hardly realistic. Stallone leaves his fists down through the whole fight—a good boxer would drop him quickly because his whole right side is completely unprotected. These guys don’t throw punches at each other through a lot of what we see—they throw haymakers, swinging for the fences each time. It’s not realistic, but it doesn’t really matter. It looks friggin’ exciting and it makes for great cinema.

Rocky is a little movie that could, and the story behind it is almost as good as the film itself. Stallone wrote the script at least partially based on Chuck Wepner, who was kind of a tomato can of a boxer, but who went the full 15 rounds with Ali. There’s no doubt that Apollo Creed is based in large part on Ali, too. The script was originally thought of as a vehicle for a bigger name, but Stallone insisted that he play the part himself, and got it by insuring a lower budget. It was ballsy, and it paid off. It made Stallone into a household name and added another dimension to a tale that was already based more or less on the American dream.

I understand why this movie won the awards it did. In retrospect, it probably didn’t really deserve them, but it’s a great story, the sort of story that makes people happy to see it on the screen. Sometimes that’s enough, and with Rocky, it is. 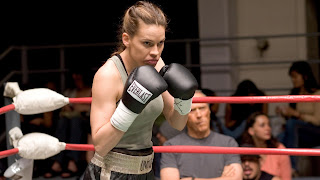 There’s something about boxing that is inherently dramatic. Sports films number few and far between on The List, but I can think of four straight up boxing films that made it, and a fifth (On the Waterfront) that has a boxing connection. I can only think of two baseball films, and unless you count billiards as a sport (I don’t), damn few others that have sports as a central theme (but I’ll give you Breaking Away). Oh, there are a couple--Hoop Dreams and Senna, for instance, but many of the films that touch on sports have them as a side story instead of the main focus. No, while there are a number of solid sports films out there, it seems that nothing says drama like people in the ring. Oscar evidently agrees—of the 85 films (to date) that have won Best Picture, three are sport-centered, and two of those are boxing films. One is Rocky. The other is Million Dollar Baby. (For the record, if you look down into the comments here for an extensive discussion on sports films on The List.)

The twist here is that this film is about women’s boxing. Frankie Dunn (Clint Eastwood) has been in the boxing game most of his life. He owns and runs a boxing gym called The Hit Pit where he trains Big Willie Little (Mike Colter), and up-and-coming boxer. Frankie is cautious, though—far too cautious in the minds of most people, since he constantly refuses to get a title shot for Willie despite getting offers. This is one of the things he argues with Scrap (Morgan Freeman), who works at and lives in the gym.

After one of Willie’s fights, Frankie is approached by Maggie Fitzgerald (Hilary Swank). She fought on the undercard and won her bought, but Frankie refuses to train women as fighters. He’s frustrated when she shows up at his gym and starts training, and is more frustrated when he learns that she has paid six months in advance. Since he needs the money, he’s forced to let her train at his place. Unbeknownst to him, she tends to stay late and she starts getting advice from Scrap, and she slowly starts improving.

Things change when Big Willie jumps ship, wanting to take his shot a the title and knowing that Frankie will make him wait at least another year. Out of frustration or desperation (or something else that we’ll get to in a second), Frankie agrees to take on Maggie and train her, but will pass her on to another manager once she’s ready to fight. He does, but relents almost immediately when it becomes obvious her new manager is setting her up for a loss in order to benefit one of his other fighters. So Frankie takes her on full time.

What we learn is that Maggie is the female coming of Mike Tyson. She wins almost all of her fights with first round knockouts, many featuring the sound of someone hitting the canvas before the last ring of the opening bell has faded away completely. And eventually, we come to the whole idea of the title fight again, and Frankie having to make a decision about what to do with his new fighter. What follows is the third act of the film, an act created solely from the decisions Frankie makes. I won’t discuss that here, because it’s better discovered (and I think most people already know where this goes without my saying). There’s not a lot of boxing in the third act, but there’s a lot of medical drama. I’ll leave it there.

Million Dollar Baby is damn good, but it’s also more than a little straightforward in where it goes. It’s evident early in the film that Frankie is estranged from his daughter, and once he agrees to take on Maggie, it’s just as evident that she becomes in all important ways his daughter. Similarly, we get glimpses into Maggie’s life and find that she’s not necessarily looking for a father, but for someone to actually care about her for real. It’s pop psychology, but it’s also hitting us in the face obvious.

I’m okay with it. The film works well despite telegraphing the motives behind everything with hand waving, road flares, and billboards. It works despite the fact that it’s simple in a lot of ways. Again, as with Rocky (and honestly, as with most films of any quality), the reason we buy into Million Dollar Baby so readily is because the characters are good and beautifully acted. This film is far too depressing for me to really say I liked it, but I respect the hell out of it. And really, it’s hard to dislike a film that features an extra-gruff Clint Eastwood and Morgan Freeman in any capacity.

I do want to talk for just a second about Hilary Swank. I’d love for someone to explain her career to me. Seriously—this is a woman who won her second Oscar before she turned 31. She’s been in films and traded scenes and held her own with the likes of Al Pacino. Why the hell does she so frequently choose shit films like The Reaping and The Core? Pick more projects like this one, Hilary. You’ll be happier, and so will the viewing audience.

Why to watch Rocky: It’s far better than you remember.
Why not to watch: The boxing is too cinematic to be real.