Only the Silent Survive

Film: The Killing Fields
Format: DVD from NetFlix on laptop. 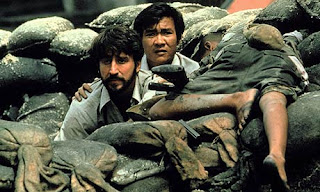 I know very little about the reign of terror that inspired The Killing Fields except what I saw in that film today. I’m not sure how much of it I could take, and I’ve watched countless films on the Holocaust. Am I suggesting that the depredations of the Khmer Rouge was somehow worse than what happened in Germany in the 1930s and 1940s? I am not. But at what point do we really measure atrocities? At some point, evils on this scale are all equally horrible, equally terrible, and need to be stopped and prevented equally. But as with anything, the first step is knowledge. Knowing what happened, we may be able to stop it from happening again.

The Killing Fields is a story about the rise of the Khmer Rouge and the fall of Cambodia, but it is also the story of two men. American journalist Sydney Schanberg (Sam Waterston) has come to Cambodia to cover the parts of the Vietnam War that has spilled over the border and what would eventually become the growing conflict in Cambodia itself. Assisting him is Cambodian journalist Dith Pran (Haing S. Ngor). Also in the area is photographer Al Rockoff (John Malkovich) and British journalist John Swain (Julian Sands). Schanberg fights with the military, personified here by Major Reeves (Craig T. Nelson) and the U.S. government, personified by the U.S. Consul in Cambodia (Spalding Gray).

The situation quickly becomes untenable, and Sydney arranges for Pran’s family to be evacuated with the Americans. Pran himself stays behind to continue covering the war and to assist Sydney. Soon after, the Khmer Rouge enter the capital and proclaim victory. This, though, is when the real trouble starts, because their reign is one of a brutality rarely seen in the world. Citizens are rounded up by the millions and many of them are immediately convicted of being disloyal to the new “Year Zero” order of Cambodian life, and are thus summarily executed. Even the foreigners are not safe. Rounded up by the Khmer, all suddenly face execution, but Pran talks them out of the situation safely, and all (including Pran) retreat to the French Embassy.

Soon, though, the Khmer Rouge demand the expulsion of all Cambodian citizens from the embassy. Working feverishly, the foreign journalists work up a fake passport for Pran, but it falls through, and he is forced into a re-education camp. The foreigners return home. The film now leaves Sydney’s story and follows Pran for the bulk of the remaining time. Knowing that as an journalist and as something of an intellectual he will not survive long, Pran feigns stupidity and simple-mindedness to continue surviving. Sydney eventually wins the Pulitzer for his work covering the war, but is plagued with guilt for not being able to rescue Pran from the terror he now faces.

The last section of the film concerns Pran’s escape from the Khmer Rouge camps and to freedom in the west. Since this is based on the true story of the real Dith Pran (who died just a few years ago), it’s not much of a spoiler to say that he makes it. But this is no less harrowing a journey despite knowing the eventual end.

The film gets its name from actual killing fields covered in the bodies of those killed by the Khmer Rouge. Pran finds himself in the middle of them during an escape attempt, and this moment is one of the most horrifying and awful things I have seen on a movie screen. It is as staggering as anything seen in a film like Nuit et Broulliard or Shoah, and the fact that this is tempered by being a recreation of the horror instead of documentary footage does not temper it at all.

The Killing Fields is a devastating film, but is also one of the single best films from the 1980s. It is not the sort of film I would relish seeing again, but it is one that I would willingly see again despite the horror. It is a story that needs telling, and one that needs sharing with other people.

Of course, the ending, at least for Dith Pran, is known (or should be) by anyone knowing even a little of the history here. It’s something that any film based on history struggles with. How do you make the sinking of Titanic tense and riveting when everyone knows it’s going to sink? Knowing, going in, that Dith Pran survived to become a New York Times photographer did not in any way affect the power of this film, nor did it in any way change just how affecting and effective the last few moments are. If you really want to know the sort of film that makes me tear up, it’s ones like this.

I argue with The List sometimes about films it considers “must-see,” but it gets not a single word of argument from me on this one. The Killing Fields defines the term. It is great because it is real and because stories like this are important. It is also great because of its performances, particularly by Ngor and Waterston. Want a weakness? Waterston’s New York accent is inconsistent. I’ve honestly got nothing else.

Why to watch The Killing Fields: One of the most intense films about the effects of modern war ever made.
Why not to watch: You may not be able to make it all the way through.