Bird is the Word 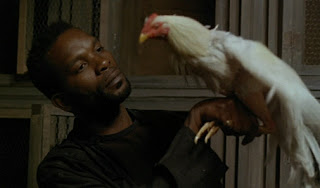 Ever get one of those films that pulls you strongly in two completely opposite directions? S’en Fout la Mort (No Fear No Die) was like that for me. There’s a lot here to like and a lot here that borders on the stomach-turning, especially for anyone concerned even a little with the rights and well-being of animals, since one of the main plot threads concerns an illegal cockfighting ring. It’s difficult to watch despite the film being completely compelling in all other ways.

Dah (Isaach De Bankole) and Jocelyn (Alex Descas) have signed a deal with a man named Ardennes (Jean-Claude Brialy). The deal is that they will train roosters to fight in an illegal cockfighting ring for a small percentage of the take. Ardennes, for his part, will maintain them, give them a place to live and work, and do everything necessary to ensure a constant flood of bloodthirsty bettors on the fights. Dah has more of a head for business while Jocelyn trains the birds to fight. He has a way with birds, and he soon attaches himself to one he names S’en Fout la Mort.

If that were all, though, this would be a strange love story between a man and a rooster, but the cockfighting, for as central as it is to the plot, is not the main story here. No, the real story here is the even stranger love story between Jocelyn and Toni (Solveig Dommartin), the wife of Ardennes. Jocelyn is hopelessly in love with her, and evidently has been for some time, and it appears that at least his surface feelings may be requited. However, Jocelyn is unable to act on his feelings, and instead begins to lose himself in alcohol, which dramatically affects the care and status of the birds. Things begin to unravel when Ardennes suggests that their fights are not enough like those in Mexico; he wants to attach open steel blades to the leg spurs of the roosters to produce a better show, and thus make more money. The relationship between Jocelyn and Toni is further complicated by Ardennes’s son (Christopher Buchholz), who is at least obsessed with Toni.

I’ll be blunt: I don’t really know what to make of this film. A part of me wants to like it, if for no other reason than I really like Isaach De Bankole as a general rule. He shows up in a lot of films as a West African Francophone, most notably for me in Jim Jarmusch’s Ghost Dog: The Way of the Samurai. (If you’ve seen that film, he’s the French-speaking ice cream man, and he’s almost instantly recognizable here.) As I said at the top, this is a film that has a lot going for it. It’s well filmed and paced and interesting throughout.

The problem, honestly, is the cockfighting. It seems so needlessly cruel and simultaneously bizarre to me. I can’t for the life of me understand the appeal of watching a couple of bird flap around and slash each other with blades. Beyond that, though, forcing two animals to fight each other is one of the cruelest things I can think of, and there’s a lot of cockfighting in this film. I don’t know how Claire Denis managed to pull this off without catching hell from every animal rights group on the planet, although this may be an indication of the reason this film is so damned hard to locate.

So it becomes a question of what I find more important. Is the quality of the film and the story more important to me, or is it more important that I am being asked to watch a spectacle that is in its very heart something vicious and brutal to poor dumb animals that can’t know any better? Where do my loyalties lie here—with filmmaker or with bird? There are too many moments here that really look genuine, like birds were actually forced to fight each other and may well have killed each other for me to want to see this again. It’s like a snuff film of potential dinners, and it’s not at all pleasant to witness.

I guess, then, ultimately my choice is for the sake of the poor, dumb birds. While the story here is a good one and is inextricably linked with the cockfighting ring, it’s that cockfighting ring that ultimately kills the picture for me. I don’t want to see an animal—any animal—slaughtered for anyone’s enjoyment, least of all mine.