Watching Oscar: All the King's Men 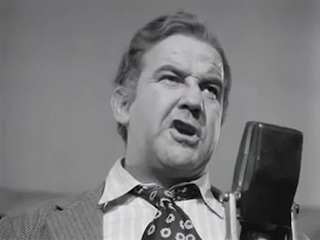 There was a time when America was at least perceived as being pretty naïve. Films like Mr. Smith Goes to Washington played with this idea. So does All the King’s Men. The main difference is that some of that naivety survived Mr. Smith and it most definitely does not make it through All the King’s Men intact. This is the story of the rise and fall of a man. There are shades (but only shades) of MacBeth here, but that’s often the case when this is the base story. In truth, it’s more Citizen Kane than anything else.

Newspaper reporter Jack Burden (John Ireland) is ready for a vacation, but is instead sent to an out of the way corner of his state to report on a man named Willie Stark (Broderick Crawford). Stark is upset because he feels (rightfully) like his state is being run for the personal gain and pleasure of the few instead of for the good of the people. Burden is entranced by Stark and is disappointed when Stark runs for treasurer of his county and loses. Stark decides to concentrate on getting a law degree and fighting for the people as an attorney.

We also learn about Burden’s strange home life. He is a child of immense privilege, working as a newspaper reporter almost as a piece of defiance against his drunken and domineering mother (Katherine Warren) and disapproving step-father (Grandon Rhodes). We also meet the love of Burden’s life, Anne Stanton (Joanne Dru), a childhood friend and the daughter of a former governor. Anne enjoys er life and world of privilege and isn’t ready to share any hardships with Jack Burden.

Fast forward to the next governor’s election. With the ruling party in trouble, the naïve and wholesome rube of Willie Stark is tapped to enter the race to split the hick vote, keeping the balance of power as-is. Guiding him through this process is both Jack and Sadie Burke (Mercedes McCambridge in her first film role). Stark eventually figures out that he’s being played as a sap, but not in time to win. He bides his time, Burden loses his job and knocks around, and once again we fast forward four years.

This time, having learned the tricks, Willie Stark is elected in a landslide victory. What becomes apparent to us—in fact to just about everyone—is that he has sold himself out over and over to get the power necessary to become governor. While he certainly appears to want to do things for the people of his state, he is forced to make deal after deal with the devil to get there. He does this not so much reluctantly but openly and willingly. The level of corruption is total. Willie, after years of being a teetotaler, begins drinking heavily. He cheats openly on his wife. Much to Jack’s chagrin, one of his extra-marital conquests is Anne Stanton.

Eventually, Willie’s adopted son Tom (John Derek) acts like children of money and power often act, and gets into a drunken accident, killing a girl. And everything begins to unravel. The charges of corruption appear, the bullying, the backroom deals and shady actions all start piling up. Even Jack, so long loyal to everything Willie Stark did for any reason and despite Stark’s stealing of his girlfriend, loses faith. Stark fights back with everything he has and as hard as he can, never once thinking that the wielding of power like a blunt instrument is a bad thing.

This is the entire point of All the King’s Men. It’s all about the rise to power and corruption once the power arrives. It’s an old story, of course, but one that continues to resonate. I buy it completely, even if the film, as an artifact of 1949, speeds through some of the twisted road of Willie Stark a little too quickly.

Years ago, my friend Mark worked for the Wisconsin government. I made a half-joking comment once that I thought I should run for city council or something similar and he immediately balked. Now, I’ve known Mark for 30 years, and while we do disagree politically in a lot of ways, I don’t think he believes I’m dangerous. I asked him what the problem was, and he said that in all his years of working for the government, he saw the same story over and over. A new broom gets elected with big plans to clean things up, and within six months, that new broom is dirty, making deals, and using political power and influence for personal gain. In his experience, it was a one-to-one occurrence.

Is that the case? I don’t know. It doesn’t really matter, though, because All the King’s Men shows that story, and it’s a story that certainly happens. How often do we see a politician caught in a sex scandal or using influence in a way that violates the trust of his or her electorate? Often enough that Willie Stark’s story feels old hat. In a way, it should, since it is loosely based on the real life story of Louisiana governor Huey Long.

The largest issue here is focus. We spend a lot of time dealing with Willie Stark, of course, but we are almost never out of the company of Jack Burden. So is it Burden’s story? Sure it is, if you want the story to be about disillusionment and crushed hopes and dreams. Or is it Willie’s story? Sure, if you want it to be the rise and fall of a great man. It’s sort of both, and because of that, it’s not completely either one, and it’s not quite enough to be one of those stories through the lens of the other.

Regardless, it’s a pretty exceptional film. Even if it weren’t it serves an important role as the screen debut (and an Oscar win) of the great Mercedes McCambridge, who has one of the great speaking voices of the time. I’m a fan, and I can always pick out her voice—she sounds like a 45rpm record of Rocket J. Squirrel being played at 33rpm.

Why to watch All the King’s Men: The story hits home.
Why not to watch: It’s a little off focus with who it’s really about.