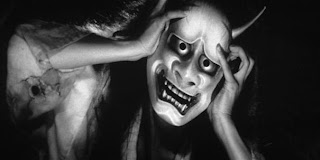 I’ve had Onibaba on my queue for months, and it’s been sitting there on Hulu since about the time I first got a Hulu account. There it sat, unwatched until today. Why? Why did I wait this long? I don’t know; I just did. Onibaba is a film I wish I had seen a few months or a few years earlier, though. It’s strange and compelling, and while not particularly scary in the traditional horror sense, it is nonetheless an effective horror film. It even comes (as all good horror stories and fairy tales do) with something like a moral.

In medieval Japan, two women live in a massive plain of tall grasses. The older woman (Nobuko Otowa) is waiting for the return of her son from the wars currently being waged by a number of different warlords. In the world of the warlords, peasants don’t matter, so entire groups of population are scooped up and conscripted, and this is what has happened to her son. Also waiting is the woman’s daughter-in-law (Jitsuko Yoshimura).

Because there is a war, farming is almost impossible. The samurai take everything anyway. The two women survive by hunting and killing rogue samurai who enter their sea of tall grass. While that sounds like a tall order—two women against trained and armed warriors—the women have particular advantages. They know the terrain, first of all, and they are also ruthless and cunning. Once they have killed their victims, they strip the bodies of any valuables and sell them to Ushi (Taiji Tonoyama), who gives them food. The bodies are dumped into a very deep and narrow pit. By trading their spoils for food, the women manage to survive and hope for the return of their son/husband, Kichi.

Instead of Kichi, they get the return of their neighbor, Hachi (Kei Sato), who was conscripted at the same time. He tells the women of some of his experiences in war and in deserting and coming home. Kichi, he tells them, has been killed. Hachi soon joins their team of samurai killers, helping them dispatch others that come into the area. Hachi also shows no small amount of attention to Kichi’s widow (I’d love to give her a name, but she’s never given one in the film). His reasoning is that a young woman like her needs a man, and he’s available. Kichi’s mother offers herself instead, but Hachi isn’t interested in her. Kichi’s mother is worried that he will take her daughter-in-law away from her, leaving her alone and unable to fend for herself.

Ultimately, Hachi and the younger woman do start hooking up nightly. She waits for her mother-in-law to go to sleep and then runs off to Hachi’s hut for a night of bump and grind. She runs because the grasses scare her at night. Slowly, the mother-in-law twigs to the relationship and is greatly upset by it. And then everything changes. She encounters a samurai wearing a hideous demon mask (Jukichi Uno) who asks her to lead him out of the sea of grass. She tricks him and forces him to fall into the pit, then climbs down and steals his armor and the mask. And she devises a plan. Knowing that the relationship between Hachi and her daughter-in-law is happening, and so she plans to reveal herself in the demon mask as a way to scare the younger woman back home. But of course things go awry.

Onibaba is dead slow. I say this not as a criticism of the film but as a statement of fact. It’s slow getting to where it goes.The guy in the demon mask doesn’t show up for more than an hour, and the old woman has it for only about 20 minutes before the end of the film. This is not a problem though. While the film is slow getting to the actual meat of the story, it’s never dull in getting there. It causes me to think something, though. The demon mask is merely an external representation of the demon. I think the demon has been with us all along in the form of the older woman. It is she who leads the killing, she who looks to manipulate those around her. She claims that she cannot survive without her daughter-in-law (in point of fact, she says repeatedly that she can’t kill without her) but does. She kills, lies, steals…all she needs is that mask to complete the package.

Onibaba also contains some of the oddest nudity I’ve seen in a long time. What I mean is that much of it is completely non-sexual and not intended to be. Frequently, the two women are topless, either when sleeping or from the heat. It’s some of the most matter-of-fact nudity I’ve ever seen. It simply is.

What strikes me is just how damn good every element of this film is. It is gorgeously lit, for instance, and every appearance of the demon mask is fantastic and never stops being shocking. The costuming is just as good from the peasant garb of the two women and Hachi to the fabulous samurai armor. It all looks good in black-and-white, too. This is a film that I can’t think would be enhanced in any way by being shot in color; black-and-white suits it perfectly. The plot, while simple, is complete and works perfectly in the context of the film.

If there is something to overcome, it’s the style of acting. It is very much in the style of Noh Theater, which means overly dramatic and with huge, dramatic gestures. It’s extreme, but that was very much the style of Japanese film of the period. It’s unusual for a modern American audience, but was not out of place for Japan at the time.

Hunt this one down. It’s worth seeing, and worth seeing again. As for myself, I can’t wait to take it for another spin.