The Most Apt Title I've Seen 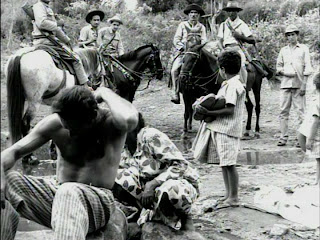 It’s not often that I find a film that makes me long for the fun and pleasant pastures of El Norte, but Vidas Secas (Barren Lives) is just such a film. A prime example of the Brazilian Cinema Novo style, which was itself influenced almost exclusively by Italian Neo-Realism, this is a film in which very little that is good happens. More specifically, it seems like everything bad that can happen does, and everything bad is focused on one family group. It’s one step forward, two steps back without the step forward. It’s The Grapes of Wrath with even less hope and joy.

In fact, that’s the biggest issue I have with the film. It’s not that bad things happen, it’s that bad things appear to happen exclusively to the family that is the center of the film. For one very long stretch of film, there’s a celebration going on while one of the characters sits in jail after receiving a beating for a crime he didn’t commit. I hate watching films like this. They seriously make me question why I’m doing what I’m doing.

Anyway, I should probably dive into the misery here so that you don’t have to. A family of four, the father Fabiano (Atila Iorio), mother Sinha Vitoria (Maria Ribeira), and kids Gilvan and Genivaldo (Gilvan and Genivaldo Lima respectively) trek across northeastern Brazil in search of a place to live and work. Dirt poor doesn’t begin to describe them. There has been an ongoing drought, and they have evidently been forced off of their land because of it. Eventually, they find a house and squat there, dreaming of a better life.

The owner of the house arrives and after a bit of negotiation hires Fabiano to help look after the cattle. When it comes time to get paid, he keeps back some of the money owed to Fabiano to cover the interest on money loaned to the family during the year. Fabiano is also responsible for “taxes” that seem more or less like a way for a group of soldiers to steal some of his cash. The family heads off to town for some sort of celebration, which eventually leads to the situation mentioned above. See, Fabiano is dragged into a gambling game and leaves. This causes one of the local police/military/militia/guys in uniforms to get mad, trump up a charge, and throw Fabiano in jail for the night after a severe beating. See! So happy!

When the drought returns and all the animals start dying? Yeah, can’t you just feel all of the bright spots this film offers up? I can handle that when it’s a random cow, but it’s just cruel when for no fair reason Fabiano Old Yellers the family dog, but half-asses it, so we get to watch the dog suffer for a few minutes before it finally dies (Siobhan, this is another one for you to avoid). The lone bright spot almost happens when Fabiano encounters the cop/officer/whatever who abused him and threatens him with a machete, but then doesn’t kill him. I suppose it’s a moral victory of a sort to leave the guy alive.

There’s nothing pleasant about this film at all. The world is (per the title) barren and desolate. It’s dirty and filled with pain. Even the kids get moderately abused by their parents now and then just for existing. One of the kids gets a smack on the head for asking his mother what hell is—more accurately for asking her if she’d ever been there—then goes outside and looks around, labeling everything he sees as hell and everyone he sees as the damned. And he’s right. It is hell, which is immediately confirmed by his mother inside the house complaining about the life they are living.

And that’s sort of the moral of the film here. Nothing good is going to happen for these people. They’re not going to catch a break from anyone. Instead, they’re going to be robbed, cheated, beaten, spat upon, brutalized, and forced into one tragic decision after another until finally the film runs its course and we can all get on with the rest of our lives. Holy shit, but I couldn’t wait for this film to end.

For all that, it’s not a badly made film despite being amateurish at times and frequently having an audio track that is obviously overdubbed. I even understand the desire to make a film like this sometimes. There’s a desire to show human misery and the real lives of people who have almost nothing but the clothing on their backs. But do there have to be so many films like this? I half expected the last 15 minutes to be just watching the family wither away into nothing before our eyes. And in a way, didn’t I? The film ends with a moral pronouncement about the strength of these people, but strength only goes so far.

Why to watch Vidas Secas: A great example of the Brazilian Cinema Nova.
Why not to watch: It’s wrist-slitting depressing.