There is no genre of film more quintessentially American than the Western. Not even film noir is so American, and yes, I’m including spaghetti Westerns in this; they’re American, too, in their own way. The American myth is all about the one many alone who stands up against overwhelming odds and still triumphs. In a large part, the concept of the American Dream comes from this basic Western story. With a classic Western, you know that the white hats are going to win and the black hats are going to lose. Most importantly for that myth, there are many Westerns in which one man stands alone against those who wish to cause him harm.

Ride Lonesome is pretty good at squeezing all of those Western tropes into a single film. Like many Westerns, it’s incredibly straightforward. There’s not a lot of subtlety in the plot, which makes sense with the film’s almost disturbingly short running time. A man with the awesome Western name of Ben Brigade (Randolph Scott) captures a wanted outlaw named Billy John (James Best). There’s a ransom out on Billy, and Brigade plans to bring him to Santa Cruz to collect, and to make sure that Billy meets his appointment at the end of a hangman’s rope.

Along the way, Brigade stops at a trading post just before an Indian attack. With the attack fended off and some pretty solid evidence that her husband has been killed out on the range, Carrie Lane (Karen Steele), who runs the outpost, decides to tag along with Brigade. Also coming along are Sam Boone (Pernell Roberts) and Whit (James Coburn). They’ve heard that there’s an amnesty offered for anyone how brings Billy John into Santa Cruz. Since they’ve spent a bit of their lives on the wrong side of the law, they’re really interested in that amnesty. This is especially true because Boone has a parcel of land he won’t be able to get to without that amnesty.

The tension in the film comes from two places. First, Boone and Whit aren’t going to collect that amnesty if they aren’t the ones who bring Billy John to justice, which means they’ll need to either convince Brigade to give them the credit or (more likely) kill him and bring him in by themselves. Ironically, they’d be instantly forgiven for killing Brigade by that same amnesty they want. While Whit seems a little slow and doesn’t have an issue with the killing, Boone is pretty reticent. The other point of tension is Billy John’s brother Frank (Lee van Cleef). It’s almost a guarantee that he won’t want to see his brother hang and will be hot on the trail of anyone looking to drag Billy John into Santa Cruz.

It’s a pretty standard set-up, but it’s a standard because it’s a good one. Billy wants to get away, and is pretty sure he will with Frank’s help. Frank wants to rescue his brother, and we learn that he’s had a pretty significant run-in with Ben Brigade in the past. Frank’s assertion that this is all about forcing a confrontation between him and Brigade, an assertion without much meat on it when he makes it, becomes more and more evident as the film goes on. Carrie is merely looking to remain alive in a hostile place, and spending her time with three experienced gunmen seems to be the smartest move on her part. Whit and Boone want a chance to start fresh, and appear to be in earnest about that. And Brigade? Well, his motivations are kept close to the chest until the very end.

The biggest issue with Ride Lonesome is its length. It’s too short. There’s a surprising lack of tension throughout the film because the real tension doesn’t show up until almost the end. Just when things are about to get interesting, everything comes to a head all and once and is suddenly resolved. There’s no sense of rising action in this film. Instead, there’s simply a collection of linear stories that all meet at the same time.

While Ride Lonesome isn’t a bad film by any stretch, and is a pretty good Western, it’s far too simple to be much more than what it is—a decent little film and a nice showcase for a deep cast. It could be a much more interesting film with another 15 or 20 minutes put into it. There’s a great deal more to be teased out in the relationship between Boone and Whit and their motivations and ultimate actions toward Ben Brigade. We’re set up for this to be a major turning point in the film, and instead we get a little build up and a complete fizzle, and it’s the fizzle we sort of come to expect.

For all that, though, this is a gorgeous film and worth seeing if for no other reason than the fantastic Wyoming landscape. I’ll also say this—for as much of an anti-climax as Ride Lonesome proves to be, the final shot makes it all worth it. With a more involved plot, that final shot would only be better. 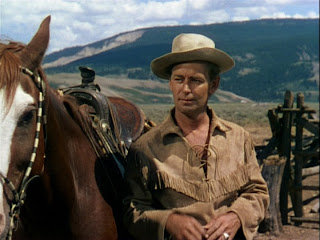 And then we have Shane. My wife’s brother is a huge fan of Westerns, and he doesn’t like Shane, mostly because he doesn’t like Alan Ladd. Personally, I think he’s out of his mind on this one. I watched it for the third or fourth time last night and realized what the film represents for me. It is quite possibly the most quintessential Western, the most Western-y Western ever made. It’s funny, because I was going over it in my head and made this realization, then looked into The Book and discovered that the author of its entry said almost the exact same thing. We independently reached the same conclusion. Shane isn’t my favorite Western by a long stretch. I greatly prefer The Searchers and Unforgiven. I think High Noon is probably the greatest in the genre. But Shane is never far out of the discussion of any topic within the genre, and always at or near the top of the list regardless of the subject under discussion.

Shane concerns itself with the classic struggle between the men who want an open range for their cattle and the men who want to fence off tracts of land for farming. Joe Starrett (Van Helfin) is a farmer being harassed by the local cattle baron, Rufus Ryker (Emile Meyer). Luckily for him, a buckskin-clad drifter named Shane (Alan Ladd) rides in and decides that the Starrett farm might be a good place to stay.

Shane is a big help, too. First, he’s able to take some of the flak from the cattlemen, although in his first encounter with them, he soaks up some of their anger and scorn and doesn’t otherwise react. There also seems to be some attraction between him and Marian Starrett (Jean Arthur), Joe’s wife. He also becomes an object of obsession for Joey Starrett (Brandon deWilde), the young Starrett child with disturbingly close-set eyes.

The farmers have a real time dealing with Ryker and his men. For their part, the cattlemen do everything they can to force the farmers out of their homesteads. They run cattle through the farms, dig up planted crops, threaten and provoke them, and more. Eventually, when pushed to it, Shane fights back in town, which results in a huge dust up and earns both him and Joe Starrett some anger, but also a decent amount of deserved respect.

Desperate, and hoping to take over completely, Ryker offers jobs to both Shane and Starrett to no avail. With nothing else to try, he hires noted gunslinger Jack Wilson (Jack Palance) to come in and clear out the farmers. Wilson starts by pushing the hotheaded farmer Frank Torrey (Elisha Cook, Jr.) into a battle which sees Torrey on the business end of a bullet.

What no one knows, but Starrett suspects, is that Shane is an experienced gunfighter. But Starrett is a proud man, and not a stupid one. He knows there’s some attraction between Shane and Marian. He knows that Shane will do a better job protecting her than he can. And he never wants another man to fight his battles. So what happens with Wilson and Ryker? What will become of Shane? Will Joe Starrett die for pride? Will little Joey Starrett ever shut up?

Shane really does have everything a Western can have and more. Any basic trope or cliché of the genre is here, and many of them were either started here or perfected here. The roles are perfectly filled all the way around, and with one exception (we’ll get there in a second), they are not only well acted, but beautifully written as well. We understand almost everyone’s motivation and their speech and actions are perfectly in line. We don’t know Shane’s, but we don’t need to. He’s simply doing right by a family who needs help. Maybe he’s atoning for past misdeeds. Maybe he’s trying to turn over a new leaf. We don’t know, and it doesn’t matter.

So let’s talk about Joey. He is one of the most annoying film kids I have ever countered. Even if we get beyond the fact that he’s a weird looking little mug (and he is! His eyes are about two inches too close together), he never shuts up, and he starts every sentence with the word “Shane.” The only moment I really believed him in the film is the first time we see Shane shoot. Joey looks genuinely startled. Beyond this, he is irritating in the extreme.

But while I really wanted to punch Joey, or at least slap him around a little, I have nothing bad to say about anything else in the film. This is, as I mentioned above, not my favorite Western or the one I think is the greatest, but it is the purest. It is the perfect distillation of the Western genre and the perfect representation of iconic Western character types like the lone gunman and the sodbusting farmer. But we do need to discuss the ending.

So the big controversy about Shane is whether or not Shane survives. In the final gunfight, he is wounded, and then he tells Joey that it's time for him to leave. He rides off, with Joey yelling the now-famous, "Come back, Shane!" But does he live? The film doesn't tell us.

I think he doesn't. Mid-way through his ride away, he slumps in the saddle and never sits back up. I think Shane put on a good show for the kid, held it as long as he could, and died riding away. Ultimately, I'm not sure it matters, but I think it's a better ending that way.

Aside from Joey, I genuinely can’t think of a way Shane could be better.

Why to watch Ride Lonesome: A surprisingly deep cast.
Why not to watch: It’s too short to build up much tension.

Why to watch Shane: The most quintessential Western ever made.
Why not to watch: Damn, but that kid is annoying!