Film: Europa ‘51 (The Greatest Love)
Format: Video from The Magic Flashdrive on laptop. 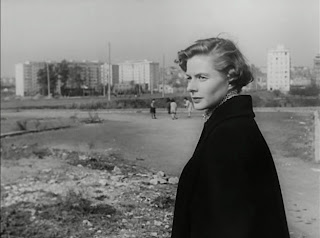 There’s a strange tenor to Europa ‘51 (also known as The Greatest Love). I’m half convinced that Rossellini’s message as presented is dangerous rather than uplifting or in any way enhancing of the human spirit. This is a film that attempts to have a huge emotional impact on the viewer, and in my case mostly failed to move me that much. More to the point, I genuinely can’t tell if Rossellini’s morality tale is pro-communist, anti-communist, or if (in the words of Tim Curry in Clue) communism is just a red herring.

Irene Girard (Ingrid Bergman) is a well-to-do socialite living in Rome in the years just after World War II. There is hope of a continued peace, but the country is in some turmoil. The Girards have enough money to not only live well but to entertain fairly lavishly. The relationship between Irene and her husband George (Alexander Knox) have an evidently distant relationship. It’s not at all adversarial, but it doesn’t seem to be very close.

The problems all come from their son, Michele (Sandro Franchina). He feels ignored by his parents, who seem to spend all of their time entertaining and not spending any with him. I think we’re supposed to be sympathetic to Michele, but it’s not that easy when he comes across as such a whiny little mama’s boy. Anyway, he’s surly and sort of unpleasant, and wants a return to his life during the war when he was able to completely monopolize his mother’s time. At a dinner party, he is sent to his room. Rather than staying there, he tosses himself down a staircase and breaks his leg.

Irene, of course, is convinced that Michele attempted to kill himself despite what she is told by Andrea (Ettore Giannini), her cousin, who works as a journalist. Andrea is a dedicated communist, and would love to convert Irene (he’d like a little more from Irene, too, but that’s not going to happen). Regardless, after a few days of convalescing, Michele dies from a blood clot in his leg. Naturally, this causes some significant soul searching when it comes to Irene and George, but we really only see Irene’s suffering.

After a good ten days in bed, Irene starts to move out into the world again. Andrea makes his move, not romantically, but socially. He tells Irene all about the ills of the real world and all about his dream of a communist paradise in which everyone has a job and everyone is equally cared for. Within moments, Irene has become the do-gooder of the world, looking to right every wrong she can possibly find. She’s a one-woman A-Team with fewer automatic weapons and no van. She gives a poor family money to save their child, finds another woman a job and even fills in for a day at the factory, and sits a bedside vigil for a prostitute dying of tuberculosis.

It’s those last two events that are particularly meaningful for Irene. Her day on the factory causes her to doubt Andrea’s vision of a communist paradise, since she found the entire experience degrading. After the prostitute dies, she helps a young criminal escape the police because he is related to the family she helped initially. She then turns herself in to the police and is threatened with prison. It is here that she fully explains this journey she is on—a journey of living exclusively through her philanthropy.

Through all of this, her family starts to think she is stark raving bonkers. At first, her husband believes that she is having an affair with Andrea. Eventually, they figure out that she has become this figure of assumed sainthood, a sort of Robin Hood. And they bring in experts who confirm the same thing. The third act of the film concerns not everyone’s reaction to Irene’s new life, but the decision as to whether or not she should be committed to a psychiatric facility indefinitely.

I don’t really know what to make of this film. At first, it appears to be so pro-communist that Joe McCarthy was spinning in his grave simply because an American citizen was watching the film. But as we move into the middle and Irene discovers precisely what a work day is like, the tone shifts. And it’s a strange shift. Suddenly, for this woman who has never worked a day in her life (she tells us her son had a nanny for most of his life), a single day in a factory is such a degrading experience that she can’t bear to think of people working. At the same time, she seems to genuinely want to help people and works tirelessly on the behalf of others through most of the film, at least part of this time as a burgeoning commie.

Ultimately, I get where Rossellini is going, I think. Irene’s extreme philanthropy is the sort of thing most of us would call laudable in most situations, but here it is taken not merely as a negative, but as a sign of actual insanity. In the crazy post-war and Cold War world of this film, even the most contrite apology and the most heartfelt and honest attempt to help anyone results in immediate suspicion from everyone.

It’s worth mentioning that the copy of Eurpa ’51 I saw was originally done in Italian, then dubbed into Spanish with English subtitles. The subtitles are frequently difficult to read and harder to parse, which makes perfect sense for a film two steps away from its original language. It does make for a difficult watch, though, but complaining about it too much would be a disservice to the film.

This is not a bad film, but it feels…emotionally off the mark. Irene’s great compassion for her fellow people doesn’t play as well as the film wants it to. Ultimately, I can’t help but wonder what makes this film so important.

Why to watch Europa ‘51: Because it’s rare, and that makes it kind of special.
Why not to watch: It’s tonally strange.