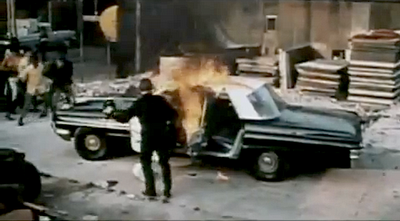 It’s been a theme lately that the films I have watched have dealt strongly with sex. In its own way, Sweet Sweetback’s Baadasssss Song is both more sexually charged and less sexually relevant than the other films I’ve watched from The List in the past week. There’s no escaping the sex here, much of which is alleged to be real. In fact, writer/director/star Melvin van Peebles contracted gonorrhea during the course of the film and successfully got worker’s compensation for it, since he was injured on the job (and literally “on the job”).

The film contains a simple story, and one that would be duplicated, referenced, or given homage in the majority of Blaxploitation films for the length of the genre. It’s one of the first films to depict a black hero who didn’t conform to white American standards. Here was the sort of man that White America feared. He wasn’t educated, erudite, or polite. He was a hardcore brother who found himself constantly under the boot heel of the Man and who fought back the only way he could.

A young orphan (Mario van Peebles) is taken in by a whorehouse and given a job as a towel boy. He is soon deflowered by one of the prostitutes, who dubs him “Sweet Sweetback” thanks to his large appendage. Sweetback grows up in the whorehouse and eventually graduates to performing in sex shows. One night, a pair of cops show up and ask Sweetback’s boss Beetle (Simon Chuckster) if they can “borrow” Sweetback for a few hours. They need to look like they’re making progress on a case, and they want to bring in people for questioning just so they can look good. Beetle agrees, since he needs the cooperation of the police to keep his brother/sex shows running.

On the way back to the station, the cops arrest Mu-Mu (Hubert Scales), a Black Panther. They drive to a secluded location and decide to rough him up a bit, which forces them to uncuff Mu-Mu from Sweetback. Sweetback takes this opportunity to beat the two cops senseless with the unhooked half of the handcuffs. The rest of the film concerns Sweetback’s attempt to get to Mexico and safety while an increasing manhunt seeks to capture him and bring him to justice. Along the way, he finds multiple opportunities to enlist aid thanks to his main pants-located talent.

What’s noteworthy here isn’t the story. In many respects, this is a pared down version of The Defiant Ones including the idea that in some respects the police are chasing an innocent man. Sweetback is absolutely guilty of beating the crap out of two cops, but had those cops not been corrupt in the first place, Sweetback wouldn’t have been in the back of a squad car in the first place. It’s also not particularly the style. Melvin van Peebles tries to bring in some film technique, using a number of stills and overlays, and uses the same technique with the soundtrack, frequently playing multiple songs at the same time. It’s interesting and frequently done well, but it’s hardly innovative for 1971. Additionally, much of the acting is hopelessly amateur, particularly the white cops.

What’s really important here is that the film was made in the first place. Sweet Sweetback’s Baadasssss Song had a lot going against it from the start and it still managed to get through production, get released, and it ended up making a good deal of money. If nothing else, it showed the Hollywood establishment a couple of important things. First, black filmmakers existed and could not only be counted on to produce films, but could produce them and make a profit. Second and more important for the film companies, Sweet Sweetback showed that there was a black American audience for films like this. There was a large number of people who wanted to see black heroes who weren’t accepted by the mainstream white majority.

The most important thing to realize with Sweet Sweetback’s Baadasssss Song is that while the production values and the acting were amateur in places, the filmmaking never was. Melvin van Peebles made the best film he could with the constraints and restrictions of time and budget. If for no other reason, it’s noteworthy for that, but the other aspects are critical as well. Without this film, there may still have been a Shaft and a Super Fly and even a Dolemite, but it would have happened much later. Sweet Sweetback set a standard and made an entire audience viable. Not many films can make that claim.

As for all of the sex, this is a film that contains quite a bit of it and to which I do not object in the slightest. It makes sense in the context of the film, for one thing. For another, as with a few others I’ve seen recently, the sex is merely an element of the plot—it’s something that actually moves the story forward rather than being an end in and of itself. It’s one aspect of the film, and not the most important one, so it works for me.

Why to watch Sweet Sweetback’s Baadasssss Song: While only partly a Blaxploitation film itself, the genre wouldn’t exist without it.
Why not to watch: The lack of budget makes it look like an amateur effort.