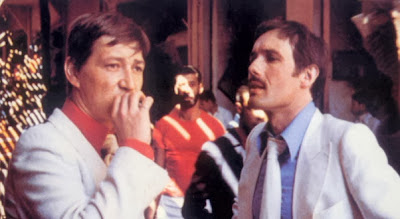 Faustrecht der Freiheit (Fox and His Friends) is an unpleasant film. I wouldn’t go so far as to say it’s a bad film, but it’s not a very nice one. This has nothing to do with a number of aspects many people will have problems with. The characters are uniformly gay, for instance; the same sort of person who hated Brokeback Mountain on moral rather than cinematic grounds will have trouble getting more than a few minutes into this one. There’s also a surprising amount of cock. At one point, in fact, there is cock that appears to be entirely decorative, laying languidly flaccid in the background of a scene filled with conversation.

Franz “Fox” Biberkopf (director Rainer Werner Fassbinder) is a gay man without a lot going for him. He works at a carnival as a “talking head,” an allegedly severed head that can speak. As the film opens, the carnival owner and his lover, Klaus (Karl Scheydt) is arrested for tax fraud. Suddenly jobless, homeless, and penniless, Fox desperately attempts to play the German lottery, convinced (as he is every week) that he will win. As it happens, this time he does, pocketing a cool half million marks. This makes the slow, tactless, and somewhat unattractive Fox a sudden catch for a few elegant gay men with expensive tastes. Most notable, Fox becomes enamored of Eugen (Peter Chatel), the heir to a printing company that has fallen on hard times.

This happens early in the film. The bulk of the rest of the film consists of a trio of men—Max (Karlheinz Bohm), Eugen, and Eugen’s former lover Phillip (Harry Baer) fleecing Fox for as much money as they possibly can. Eugen takes it upon himself to culture the crude and uncultured Fox as much as he can while simultaneously spending Fox’s windfall as quickly as he can. He gets Fox to promise a fifth of his fortune to the continued existence of his father’s company, gets him to purchase an expensive apartment and furnishes it lavishly with items from Max’s shop, and convinces Fox he needs a new wardrobe, all purchased from Phillip. Fox, who is both naïve and not very bright, pisses through his money in an attempt to please these “friends” and live the high life. Even his drunken sister Hedwig (Christiane Maybach) fleeces him a bit, although for her it’s mostly for free booze.

Of course, none of this makes Fox happy. He is more or less cursed by his own stupidity to be constantly unsatisfied because those around him he wants to impress are constantly pretending to be unsatisfied with their lives. Of course, this isn’t going to have a happy or pleasant ending. Nothing good is going to happen for poor Fox and ultimately, he’ll pay not only for his own sins, but for everyone else’s, and he’s not smart enough to pay anything but retail.

Faustrecht der Freiheit may well be a brilliant film, but it’s also a very ugly one. Filled as it is with the gay German version of the beautiful people, these are characters that are uniformly ugly in spirit and intent. Even Fox isn’t completely blameless here. While he is completely naïve, uneducated, and thick, he’s also completely unmannered and causes a great number of his problems himself. While no one here really gets a happy ending, most of the characters emerge from this more or less unscathed, with only Fox left to settle the tab.

This is yet another film that I think may be quite easy to respect but completely impossible to enjoy. There’s nothing to enjoy here, regardless of how well made it is. It’s a depressing spiral of stupidity, pain, debt, and moral repugnance. Fox is a perfect victim because he is unaware that he is a victim. There’s no catharsis in seeing the inevitable play out here. There is only the tawdry realization that what is happening has to happen based on the personalities we have in the story.

Of course, this is pretty much par for the course with Fassbinder. Faustrecht der Freiheit is the most accessible of his films that I have seen. It’s certainly the easiest one to follow along and understand. A great deal of that is there is truly only one direction in which it can go. It may well be the best starting point for his work. But it’s not a pleasant oeuvre, and this is not a pleasant experience.

Why to watch Faustrecht der Freiheit: A romantic tragedy with an odd twist for the time.
Why not to watch: Everyone in this film is an asshole.

Posted by SJHoneywell at 7:09 PM