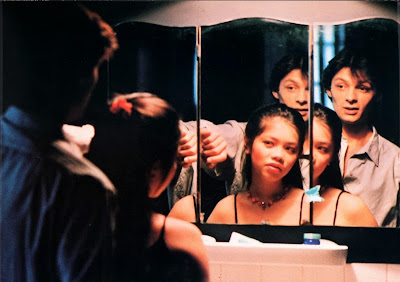 Is it wrong of me to root for the bad guys? I don’t often want the evildoers to come out on top in a film, but it does happen now and then. It happens when the bad guys are particularly appealing or when the people I’m supposed to find interesting and appealing aren’t. In the case of Diva, it’s a little bit of both. I don’t find the people we spend the most time with at all interesting or likable, and one of the evil assassins happens to be played by an actor I really like. It’s a dilemma, I tell you.

Jules (Frederic Andrei) is a postal worker who delivers mail from his moped. He is also obsessed with opera diva Cynthia Hawkins (Wilhelmenia Fernandez, in one of her only non-stage appearances). Hawkins has never consented to have her voice recorded—live performance is the only way to hear her sing. So, naturally, Jules smuggles a recording device into her recital and tapes it. On the way out, he steals one of her dresses.

And this is where the film loses me. I stopped taking it seriously in the first 10 minutes. The film takes place/was filmed in 1981, long before the digital age. The recording device Jules sneaks into the theater is about the size of a toaster oven. No one notices. No one sees him tweaking it, turning knobs. No one sees him carrying this thing around, and no one in the crowd around the dressing room sees him drag off a full-length shiny silver dress off the rack. I know that someone who likes this film more than I do will soon arrive to tell me how all of this makes perfect sense or that I’m naïve in thinking that he couldn’t really get away with this, but I simply don’t buy it. I might buy the theft of the dress, but the recording? He all but sets up a radio dish in a theater where the performer is notoriously unwilling to have herself recorded. I don’t buy it.

(Yes, I know it turns out he was seen. We learn about a group of criminals who want the recording, and they know about it because they saw him make it because evidently this particular group of criminals loves opera. At the same time, we learn that the recording was made from around the third row of the theater, dead center. So he was right in front of everyone, and no one else saw his massive recording device. Right.)

Anyway, the next day while Jules is making his rounds, a prostitute drops a recording into one of his mail satchels. This recording exposes Saporta (Jacques Fabbri), a high-ranking police officer, as the actual leader of a number of criminal enterprises that include drugs and prostitution. Shortly thereafter the prostitute is killed by an awl thrown into her back by Le cure (Dominique Pinon). It’s at this moment I started rooting for the bad guys. I have nothing against the poor prostitute; I just really like Dominique Pinon.

Around the same time, Jules is walking around a record store when he sees Alba (Thuy An Luu) stealing. He also sees her get away with it, because when the portfolio where she placed the records is examined, all that is there are nude pictures of herself. Jules strikes up a conversation with her and takes her back to his loft, which is French-movie-cool. He lets her listen to his bootleg recording and then lends it to her so she can play it for Gorodish (Richard Bohringer), her sort of mentor/wastoid guru. Like Jules would really let the only-known recording of his obsession out of his possession?

Anyway, the bad guys want the tape that implicates their boss and another set of bad guys want the Hawkins recording, and suddenly everyone is coming down on poor Jules. Gorodish manages to make everything better because Jules can’t do anything for himself except manage to start a relationship with Cynthia Hawkins by essentially admitting that he stole her dress. He leaves out the part where he hires a prostitute who sort of looks like her and makes her wear it. Once again, we find something in this film that boggles the mind and not only crosses the line of plausibility, it leaps over it on an atomic pogo stick.

The only nice thing I have to say here is that Wilhelmenia Fernandez is truly talented and it’s a real pleasure to hear her sing. Otherwise, I have nothing but scorn for this film. It’s a thriller that isn’t thrilling because it’s impossible to be invested in the ridiculous story.

The biggest issue is the characters themselves. All of them are too cool for school in a sixth-grader’s fantasy world. Gorodish chops vegetables while wearing a mask and snorkel. Alba refuses to drink anything that doesn’t come with a bendy straw. At one point, Gorodish’s antique car blows up. He opens a garage door, revealing a duplicate. How random! How artistic! How completely stupid.

Not even the awesome French-version-of-Flea powers of Dominique Pinon could rescue this one from being both pretentious and dull. Cynthia Hawkins may be the diva of note here, but everyone else acts like a spoiled diva, too. None of these people are worth your time, and I was ready for this to be over an hour before the credits rolled.

Why to watch Diva: A very strange crime film.
Why not to watch: Unlikable characters.