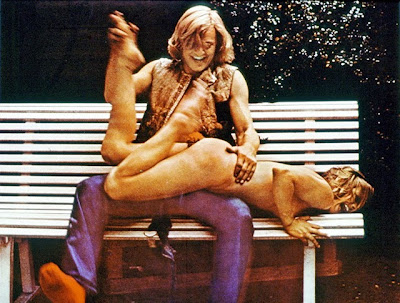 For whatever reason, I seem to have a great number of sexually-charged films left to the end of this journey. Turks Fruit (Turkish Delight) is yet another film that deals with a great deal of sex. In this case, as with many films that are “about” sex, the sex here is merely window dressing to the deeper story. According to the Wikipedia article about this film, it was voted in 1999 as the greatest Dutch film of the 20th century. I find that fact wholly depressing in so many ways. I’ve had the candy called Turkish delight, and it very much reminds me of this film. It always looks as if it will be tasty or at least interesting. Instead, it’s completely foul.

We start with an artist named Eric (Rutger Hauer) and a good 15 minutes of sex with various women in various configurations. Naturally there is something underlying this desperate need for sex, and we soon discover exactly what that is, as a great deal of the rest of the film is told in flashback. It seems that Eric was once picked up as a hitchhiker by a woman named Olga (Monique van de Ven). After a quick romp in her car and a painful incident of Eric getting his junk caught in his zipper, they have a fairly serious car accident caused by her trying to put on a jacket. Naturally, this makes Eric persona non grata with Olga’s family, who refuse to allow him to see Olga despite his insistence.

Eventually, the two get together again despite her parents’ objections and get married. There’s lots more sex. Then Olga starts getting squirrely. She starts flirting with people who aren’t Eric and eventually she leaves. This brings us back to where the film started and began this two-year flashback into Eric’s and Olga’s bountiful sexual past.

Of course it turns out that there is something seriously wrong with Olga. No doubt had she not been seriously ill, she would have continued on the expansive sexual journey with Eric until one or both of them died of exhaustion or dehydration.

The previous List film I watched was Sex, Lies and Videotape. That used a veneer of sex and prurience and even deviance to look at the broken lives of four broken people. While sex was a large part of the film (and even the title), I’d be hard-pressed to call it a film “about” sex. Turks Fruit is a film about the relationship between Eric and Olga. And what we discover when we explore that relationship is that it is entirely about sex. There is no other aspect to their relationship, at least not that we see. It’s all sex and bodily functions. When Olga’s father becomes extremely ill, they go back to her parents’ house, and not even a deathwatch will stop them from screwing in the next room, or from being walked in on by her mother.

What’s more, and this is hardly a shock, these people are assholes. Eric is exactly the sort of guy who would happily proposition women in the airport and invite them back to his place for a romp. At the revealing of a statue of Eric’s, Olga essentially strips in front of the Dutch monarch, or at least stands next to the statue with her tits hanging out. Because, y’know, they’re rebellious and artistic and Bohemian. They walk out at the end of her father's funeral, yelling at Olga’s recently-widowed mother.

But again, Olga’s sudden public nudity is hardly a shock. There are frequent scenes of both of them running outside of their apartment and onto the street completely starkers. I disliked both of them intently. More to the point, I found their constant sex ultimately boring. The film most reminded me of In the Realm of the Senses, which was another film centered on a relationship entirely focused on uninspiring and often unpleasant sex.

I didn’t think I’d say this at the start, but I’d be fine if I don’t see Monique van de Ven’s tits again. It might also be one of the worst soundtracks I’ve ever heard; it ranks down there with Ladyhawke, another Rutger Hauer film. What is it with him and shit soundtracks?

Why to watch Turks Fruit: It’s allegedly the greatest Dutch film of the previous century.
Why not to watch: If that’s true, the Dutch film industry sucks.

Posted by SJHoneywell at 7:42 PM