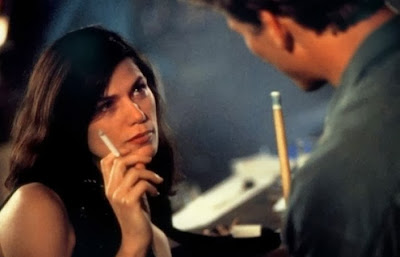 This is a straight-up noir, too. I suppose technically it’s a modern noir, but eliminate the few moments of nudity and the sexual content and there’s very little in this film that wouldn’t be at home with something luridly titled from 1952. All of the noir points are hit and hit hard here. We’ve got an attractive woman with a heart of stone, criminal enterprises, sex, detectives, an amateur in way over his head, and a dedicated sense of moral ambiguity. If only it had been filmed in black-and-white, it would slide into the canon of the period without question.

Bridget Gregory (Fiorentino) works as the slave driver and whip master for a firm selling commemorative coins. Her husband Clay (Bill Pullman) is a doctor who deals drugs on the side. As it happens, the Gregorys have taken out a six-figure loan from a loan shark, and to repay the debt, Clay has made a large-scale deal of medical-grade cocaine. When he brings home the score, far more than enough to pay off the loan shark and still net a tidy profit, Bridget waits until he hops in the shower and runs off with the cash. She winds up in a small town in upstate New York, contacts a lawyer about a divorce, changes her name, and starts a sex-only relationship with a local named Mike Swale (Peter Berg).

While Bridget is dealing with her new identity as “Wendy Kroy,” her husband is dealing with problems of his own. The first of these is a broken thumb courtesy of the loan shark. The second is Bridget’s location. He hires a private detective named Harlan (Bill Nunn) to help him recover the cash. Harlan manages to trace a call from her to narrow down her area code while Clay figures out her new name. Bridget has a talent for writing backwards, and since “Wendy Kroy” is almost the reverse of “New York,” he sends Harlan out to find her.

Meanwhile, Bridget creates a scheme with Mike. Both are now working in the same insurance office. A little conversation reveals exactly how much information Mike can learn about someone by running a simple credit report. Her plan is to contact women married to men who are provably cheating and offer to kill them for a piece of the insurance settlement.

Of course, since this is film noir, all of this is bluff and cover and double bluff and cover again. Nothing is ever what it seems and those characters with a criminal mind are always one step ahead of not only the other characters, but of the audience as well. This is another reason I love good film noir—it never talks down to the audience. It keeps things hidden until the right moments in the film to reveal them, but never does it in a way that makes the audience feel cheated. Everything here fits from front to back, but the ultimate conclusion isn’t one that is easy to figure out until it happens. In that respect, The Last Seduction is as good as any other noir from the more classic period as well as the best of those from the modern era.

When a film like this lives as far under the radar as this one has, I wonder why it happens. The Last Seduction is genuinely as good as other neo-noirs like L.A. Confidential, but it made a tenth of the money at the box office and garnered far less popular acclaim. Did the production company not know what they had?

I bought a copy of this film some time ago with no knowledge of it other than the fact that it was on the 1001 Movies list and that I’d have to watch it eventually. Now, having seen it, I cannot complain that it is a part of my film collection. I’m damn happy to have a copy that I can watch whenever I need that good noir feeling.

It’s worth saying that while The Last Seduction really fires on all cylinders (even the soundtrack is straight out of ‘50s noir), it works primarily because Linda Fiorentino nails this role and nails it completely. If she didn’t work, the film wouldn’t work, and she works as well any ever has in the role of a truly noteworthy femme fatale.

Why to watch The Last Seduction: Noir made particularly brutal and sexy.
Why not to watch: The ending is not that of the traditional noir.