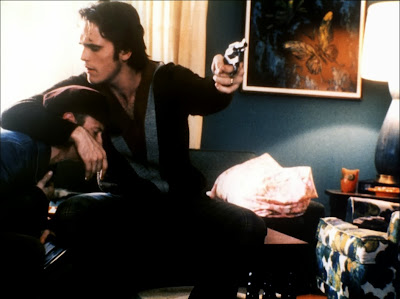 Anyone who knows me would not be shocked that my connection to the drug culture is an entirely cinematic one. My last illicit drug experience happened in the 1980s, and if I had to guess, chances are good that said experience was underage drinking. It never did a lot for me (although I was a drinker back in the day). I am substantially uncool when it comes to drugs. Sorry, folks; I come at these films with what I’ve got rather than what you might like me to be. Drugstore Cowboy is all about one aspect of the drug scene in the early 1970s. It is to drugs what Boogie Nights is to the porn industry of the same time.

The drug addicted, superstitious ex-con Bob (Matt Dillon) runs a crew of thieves who specialize in ripping off drugstores. We see this happen as the film opens. The four thieves each enter the store separately. Nadine (Heather Graham) fakes a convulsion in the middle of the store, which attracts the attention. Nadine’s boyfriend Rick (James Le Gros) tries to get more people to focus on Nadine by calling for help. Bob’s wife Dianne (Kelly Lynch) further distracts the pharmacist. While all of this happens, Bob jumps behind the counter and makes off with any drugs he can.

This all goes well, and the crew survives by selling off or trading whatever drugs they don’t want. We see this happen as they come home from their score and a junkie neighbor named David (Max Perlich) attempts to trade some crystal meth for morphine. Nadine puts her foot in things here, which makes Bob angry. We learn that Bob did some time and is still under the thumb of the police, particularly a cop named Gentry (James Remar). When the crew is raided, they decide it is time to move somewhere else.

Bob’s superstitions affect exactly how he acts in all ways. Since he once had a dog that was used to entrap him and send him to prison, even mentioning a dog means no stealing for a month. Placing a hat on a bed puts a hex on him that will only end if something truly terrible happens. Nadine continues to be his biggest problem, and when she is left home on a robbery, she overdoses and dies, leaving the crew with a serious problem. How do they get rid of her body when they are staying at a motel that is set to receive a sheriff’s convention?

Eventually, Bob decides that enough bad luck is enough and he abandons his crew and checks into a methadone clinic and tries to straighten out his life by going straight. Getting out of the life is much easier than staying in it, though, as Bob soon discovers.

This is the kind of film I wish Matt Dillon would make more of. I often feel like he gets roles that were originally intended for other people, but he’s a better actor than that. I like him a lot in this film. He’s easily the best part of everything going on here. Just behind him is the wonderful additional of William S. Burroughs as Tom the junkie priest who was instrumental in getting Bob hooked on drugs as a youth. Now down-and-out and no longer a priest, Tom continues to look for various highs and tries to survive just as much as Bob and his crew do. He, in fact, tries to pull Bob back into the life when Bob is on methadone.

The biggest issue I have here is that Drugstore Cowboy doesn’t really seem to go anywhere. We’re not entirely sure that Bob manages to get out of the junkie lifestyle, we don’t know what’s going to happen to him, or what will happen with his relationship with Dianne. We get no answers here. That may well be appropriate for the subject matter of the film, but it doesn’t make it less frustrating.

Going into a film like Drugstore Cowboy, we want either a story of eventual and ultimate redemption or we want the tragedy. Here, we get neither. Everything ends in flux. Even if this is realistic—and it probably is the most realistic ending possible—this is, ultimately, a film. The lack of resolution makes it feel unfinished.

Regardless of this, it is well worth seeing. It presents our drug-addled heroes not as the derelicts of Trainspotting or as somehow noble, but as people dealing with their life in a very bad way. There are moments of profundity as well. The most telling speech is not Bob explaining the life of a junkie to his drug counselor, but at the end when he rightly says that most people don’t know how they’ll feel, but a junkie always does. All he has to do is look at the label on the bottles.

Why to watch Drugstore Cowboy: A more palatable Scarface and Matt Dillon in a great role.
Why not to watch: I’m not sure it really goes anywhere.