Getting One's Irish Up 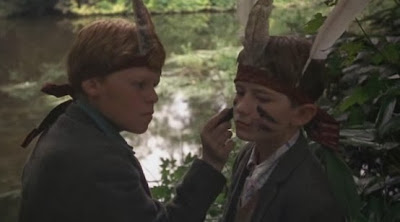 Sometimes I buy a film on a whim. I don’t do it that often, but for the last four years, when I found a film for cheap that happened to be on the 1001 Movies List, I’d buy it. Such is the case with The Butcher Boy, which I bought several years ago when I found a new copy for $3 in a bargain bin somewhere. I knew that eventually I’d get around to watching it. “Eventually” happened to be tonight.

The Butcher Boy is one of those difficult to explain films that is much better experienced than to have described, but I’ll do my best. This is the story of Francie Brady (Eamonn Owens). Francie seems like a normal, if unnaturally high-spirited, boy. He gets into typical trouble with his friend Joe Purcell (Alan Boyle). Much of this involves a local boy named Phillip Nugent (Andrew Fullerton), which makes Francie the problem of the month for Phillip’s mother (Fiona Shaw). What isn’t evident right away is that Francie isn’t merely a high-spirited kid.

Francie lives with his parents. His mother (Aisling O’Sullivan) is bipolar and suicidal while his father (Stephen Rea) is a drunk. Francie, we soon come to understand, has gotten the worst of both worlds and is actively schizophrenic. He lives in a world of comic books, atom bombs and aliens, a fantasy land that is accentuated when the Cuban Missile Crisis occurs. In Francie’s world, anything bad comes as a result of the Nugents, who soon become a comic book enemy for him. The movie tracks the slow and increasingly rapid decline of Francie from difficult child to full-blown psychopathy.

Along the way, we get a few interesting incidents, some of which help to indicate that not everything that has happened is specifically Francie’s fault. Mrs. Nugent, for instance, sics her brothers on Francie after he harasses her son again. After a fight between his parents, he runs away, only to discover that his mother has killed herself when he returns. Furious with the Nugents, Francie breaks into their house and destroys a great deal of their property, and is caught in flagrante while shitting in the middle of their living room. This gets him sent off to reform school, where he begins to have visions of the Virgin Mary (Sinead O’Connor) and where he is molested by one of the priests.

In Francie’s world, no matter what happens and what he does, nothing changes between him and Joe. In reality, Joe begins to pull away from Francie as soon as possible because Francie is obviously insane in the opinion of everyone but himself. Things worsen when his father dies and Francie is eventually sent to a mental institution. He breaks out of there as well, which leads to a series of tragic and terrible consequences.

There are moments of real genius here. One of the greatest parts of the film is how director Neil Jordan chose to demonstrate Francie’s schizophrenia. In film terms, this happens when the young Francie has conversations with the adult narrator version of Francie (voiced by an uncredited Stephen Rea). These start as actual pieces of narration, and then suddenly become conversations. It’s worth noting that the voiceover work here is fantastic. It may well be the best performance of Stephen Rea’s career.

Also worthy of note is Eamonn Owens as Francie. His career hasn’t been massively of note in the States, but this is the definition of a breakout role. At first, the cadence of Francie’s speech seemed so affected that I thought it was going to bother me. It soon became an environment, something that, like Francie himself, was just slightly off-kilter. Owens plays this role with an emotional depth not commonly found in a young, inexperienced actor. It’s the kind of thing that, in a larger budget film, would have turned him into the child star of the month. In retrospect, it might well be better for him in the long run that that didn’t happen.

What also works is the comedy. While the subject matter is blacker than black, there is no doubting that The Butcher Boy is very much filmed as a comedy and that some of the sequences are incredibly funny. The funniest moment comes when Francie is caught in the middle of his business in the Nugent home. Rather than running, he reacts with a nonchalance that would suggest that he’s come by for a cup of sugar rather than to turn the living room carpet into his personal privy.

If there’s a complaint, it’s the accents. There are times when the Irish brogue is so thick that getting through the dialogue is difficult. For me, this mostly happened at the start. After a few minutes, I was used to the thickness and the speed of the patter and it didn’t matter anymore.

This is a hell of a film. I recommend it to anyone who is curious about that descent into madness. Francie is one of the most memorable characters I’ve encountered in a long time. And despite his violence, despite his lack of understanding of why that is wrong, even despite his schizophrenia, I feel bad for the kid. With what happens here, that’s a miracle in and of itself.

Why to watch The Butcher Boy: One of the most surreal experiences of insanity ever filmed.
Why not to watch: The Irish accents can be difficult to understand at first.