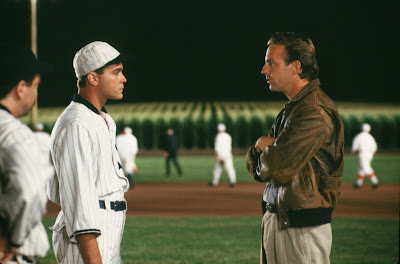 I should say right off the top that this is not going to be an objective review. I love Field of Dreams. I think I’m justified in this; Field of Dreams is hardly an embarrassing film to love, but it’s not a film I can offer an unbiased opinion on. This is a movie that does almost everything right, and the things it doesn’t do perfectly I am more than willing to forgive.

The biggest mistake people make with Field of Dreams is deciding that it’s a baseball movie. You can’t get away from baseball for too long, but baseball is merely the lens here. Much like The Ox-Bow Incident is a moral drama in Western trappings, Field of Dreams is a story of redemption and reconciliation that uses baseball as the conduit and nothing more. It’s actually possible to watch this and understand it and love it without knowing or caring a thing about baseball.

Ray Kinsella (Kevin Costner) had a rocky relationship with his father but inherited his love of baseball and his appreciation for disgraced White Sox player “Shoeless” Joe Jackson. Ray’s wife Annie (Amy Madigan) has convinced him to purchase a farm in Iowa, and with their daughter Karin (Gaby Hoffmann), the family is raising a crop of corn. That is until one day Ray hears a voice out in the middle of the cornfield. The voice says over and over, “If you build it, he will come.” Ray has a vision of a baseball diamond in the middle of his cornfield, and with Annie’s permission, he builds it.

Of course, plowing under a couple of acres and putting up lights and bleachers has put the Kinsella family in a financial hole to the point where they may end up losing the farm. It’s a problem until one day a man shows up on the field. That man is, in fact, Joe Jackson (Ray Liotta) in his prime and despite the fact that he has been dead for decades. Over the next few days, all of the disgraced Black Sox players show up on the field and spend the day playing, and after this, more and more players from the era appear to play on the field.

While the financial troubles of the farm mount, Ray gets another message from the voice. This time, it tells him to track down reclusive author Terence Mann (James Earl Jones), a J.D. Salinger-esque former activist turned angry man. Ray kidnaps Terence and takes him to a baseball game where they both receive another message and a command to track down a player named Archibald “Moonlight” Graham in Minnesota. Once in Minnesota, they discover that Graham became a doctor and has been dead for nearly 20 years. Ray has another unexplainable experience, though, seeming to travel back in time. He has a conversation with Graham (Burt Lancaster) where he discovers that Graham played only half an inning as a major league player and wanted only a chance to have an at-bat, but that he isn’t really interested in seeing Ray’s field. However, as Ray and Terence drive back to Iowa, they encounter a young ballplayer named Archie Graham (Frank Whaley) who rides with them back to the now seriously financially strapped farm.

I’m not going to say more here. There’s a lot more going on here, and while that summary does talk a lot about baseball, the real heart of the film really has nothing to do with baseball.

The reality of Field of Dreams is that I think anyone can enjoy it, but it requires an American mindset to really understand it at the deepest level. There are films that have that sort of deep cultural resonance, and I’m not sure that someone who didn’t grow up in a culture that revolved in part around baseball will really feel this film at its most elemental. I’ve been told that a film like Celine et Julie vont en Bateau can only really be fully appreciated by someone who grew up with a French worldview. As much as I love Tampopo, I think there’s truth to the idea that it is a film that would have greater resonance for me were I Japanese. Field of Dreams is like that. It’s understandable to anyone, but the deep structure of the film requires an almost genetic understanding of the culture around the game. As baseball becomes less and less relevant to Americans, I wonder how well this film will age.

There are, I admit, problems with this film. Any film that deals with magical realism requires a buy-in, and I’m more than willing to buy into this. No, the biggest problem comes in a real-world issue. Ray plows under about two acres of his farmland to build the baseball diamond. If plowing under two acres is really the difference between the farm being profitable or going under, the Kinsella family is running on a desperately small margin. The PTA meeting is, for me, a weak part in the film. It’s comic, but it also feels out of place.

But I don’t care. There are few movies that make me tear up, but the ending of Field of Dreams makes me bawl like a baby. I admit it and I am not embarrassed by that in the slightest. There’s not a scene here that I don’t like on some level, and there are moments that genuinely give me a chill down my back. These moments include, but are not limited to the first appearance of Joe Jackson on the field, Terence Mann’s admission that he saw the message about Moonlight Graham, what happens when Karin chokes on a hot dog, and Terence Mann’s incredible speech about the importance of baseball in American history and culture.

I do love this movie. I don’t care if that makes me a sap or a chump. I know I’m overselling it, but it’s purely magic, and it’s exactly how magical realism should be done.

Why to watch Field of Dreams: This is what American national cinema should be.
Why not to watch: You are a heartless human being.

Posted by SJHoneywell at 5:11 PM