The Future of Law Enforcement 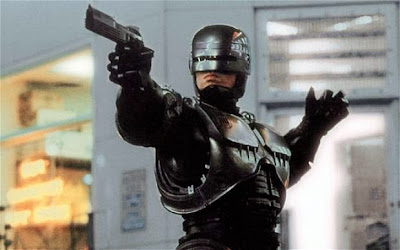 When the topic rolls around to great sci-fi action films of the 1980s, one that seems to get short shrift is RoboCop. I’m not sure why. One could mention a lot of films in Paul Verhoeven’s filmography. A lot of them are good, possibly great, and even the non-great ones are often campy fun. RoboCop is my favorite. It has all of Verhoeven’s signatures: high level violence, over-the-top gore, and camp.

In the not-too-distant future, the city of Detroit is in even worse financial straits than it is now. The city is a hotbed of criminal activity. The city has signed a contract with Omni Consumer Products (OCP), giving the company control of the police force. The company’s overarching plan is to hope that Detroit defaults, allowing OCP to take over and demolish Detroit, allowing them to create their own city of the future. One of OCP’s weapons in the crime war is ED-209, a mechanized police robot that malfunctions spectacularly in a board meeting. ED-209 is the brain child of Dick Jones (Ronny Cox). The failure of the project allows for the advancement of a new type of cop: the RoboCop project advanced by OCP executive Bob Morton (Miguel Ferrer). To become operative, the project needs a fresh corpse.

That corpse comes in the form of one police officer named Alex Murphy (Peter Weller), recently transferred into the toughest section of Detroit. Murphy is paired with Officer Anne Lewis (Nancy Allen). On their first patrol, they come across Clarence Boddicker (Kurtwood Smith) and his gang. Boddicker is a known and wanted felon. Lewis and Murphy chase them to a factory. Lewis is knocked out and Murphy is very brutally slaughtered. Naturally, this makes him the perfect choice for the new RoboCop project.

What results than is surprisingly multi-layered for a sci-fi actioner. The surface story is more or less about Murphy working as RoboCop and cleaning up what is left of Detroit and discovering bits and pieces of his past that have somehow remained from his memory wipe. Beneath this story is one of the corruption in OCP. One of these subplots is that the OCP takeover of the Detroit police causes a great deal of friction and a threatened police strike, which only adds to the chaos. Another is that (of course) Dick Jones is actually running Clarence Boddicker and his crew and is the main force of crime in the city, and has planned for a number of contingencies, such as incorporating a protocol into RoboCop that prevents him from arresting any senior official of the company.

Verhoeven includes a number of stylistic touches as well. There are a series of fake commercials that run through the film not unlike the news clips he used in Starship Troopers. These not only push the apocalyptic nature of the society but also add a great deal of humor to what would otherwise be a pretty grim and dark spectacle of violence.

The story behind RoboCop is that it was originally given an X-rating for violence, and the version that was eventually released to the general public was the 12th cut submitted to the MPAA. I believe it. While it’s hardly extreme by today’s standards, there are moments of extreme violence here that serve no real purpose other than to be incredibly violent. The opening sequence with ED-209 for instance, is one of the more famous in the film. Demonstrating a routine arrest, it malfunctions and refuses to recognize that the “perpetrator” has disarmed himself. It then proceeds to pump round after round into him. The same is true of Murphy’s execution, which is horrific. Touches of violence like this run throughout the film. I can only imagine how much there must have been in the first cuts.

The most important thing to talk about, though, is the performance of Peter Weller. I admit that, barring Naked Lunch, I like Peter Weller, and I even like him in that film despite not thinking much of the film itself. Here, though, Weller gives a much better performance than the hyper-violent, almost-B-level science-fiction would seem to warrant. The key to his performance is that he genuinely moves like a cyborg. He isn’t exaggerated but is instead believably stiff in everything he does. My favorite affectation is his habit of turning his head and then turning his body to match the direction his head is pointed. Goofy sci-fi doesn’t really deserve this level of commitment, but it’s precisely what really sells the film.

Honestly, a lot of what goes on here is pretty interchangeable. This goes for most of the characters in most of the roles. The bad guys are melodramatically, wholly bad. The good guys are, for the most part, wholly good. And that’s okay, too. This is more about the spectacle of Verhoeven’s surprising amount of violence, the camp of some of the performances and the world the film inhabits, and the technology. It’s true that the special effects don’t hold up. ED-209 is clearly stop-motion work, and it’s painfully obvious. The makeup work, though, is still excellent. Weller really looks like he’s a part of the suit.

Ultimately, I really enjoy RoboCop. It had been far too long since I’d seen it. While not everything looks as fresh as it did 25 years ago, it’s still a win in general and still fun in all the right ways. But the main reason it works is because Weller took it more seriously than he had to. Good on him for playing the role the way it was meant to be played.

Why to watch RoboCop: Balls-out ‘80s sci-fi action the way it should be.
Why not to watch: Even toned down, it’s more violent than you remember.