That Thing in the Room 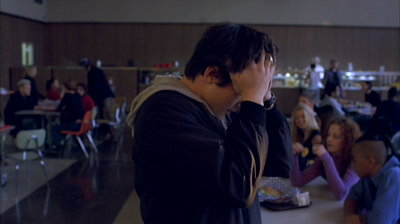 I’m not sure what I should do about Elephant in terms of a spoiler. To talk about it the way I need to, I’m going to have to spoil it, so consider the rest of this review as being under a spoiler tag. I have an unfortunate personal connection to this film, and there’s no way for me to talk about it without bringing that up. If you haven’t seen this, I think it’s probably a good idea to skip this review until you have seen it, because I think some of the power of Elephant is lost if you know what’s coming. Since we get a good indicator of what is going to happen about 20 minutes in, I suppose it’s not much of a spoiler either way.

Because of that, I’m not going to discuss anything regarding the plot until after the jump. You’ve been warned; if you’d rather get 20 minutes into Elephant to see the reveal, you should turn away now. If not, come along for spoilers.

Elephant takes place at what looks like a fairly normal high school in Oregon. We follow a series of students as they wander around their school. They check in, eat lunch, go to class, and then everything goes to hell. The entire point behind Elephant is that this is a normal day at a normal high school when everything is destroyed by a pair of students entering the school an arsenal and killing everyone they see. Many of what we assume or have confirmed as the victims of the two are those students we spend the first hour or so of the film with. And again, that’s the point. Like them or hate them, we’re supposed to understand that none of them deserve this fate.

I’ve mentioned before that I use the Wikipedia page of a given film when writing the review as a way to make sure I get names right and the order of events correct. In the case of Elephant, the Wikipedia entry is indicative of what is either the biggest strength or the biggest problem with the film. The second paragraph of the film’s plot summary contains events that happen more than an hour into an 80-minute film. That’s because not much happens in the first hour. The first hour is a series of tracking shots of the various people we follow, and we frequently see the same event from different angles at different times during the film.

This is not the sort of thing that people like talking about. My immediate impression was that the title, Elephant, refers to “the elephant in the room,” that thing that everyone sees and knows about but that no one wants to discuss. Evidently, Van Sant thought something different about his title, but it seemed obvious to me.

The difficulty of broaching the topic doesn’t excuse some real problems here. The first is Van Sant’s direction. From what I can tell, the entire point of the film is to get us to see these kids in various states during their day. It’s supposed to come across as just another day in just another high school, nothing out of the ordinary. It also happens to be astonishingly dull. We get long tracking shots of people walking and sometimes talking about nothing in particular. Then we switch to another tracking shot of people walking and talking about nothing else in particular. A part of me thinks that Van Sant should’ve held his hand back and not given us as much of the two shooters—it might have had more of an impact if it had suddenly happened without our knowing it—another elephant in the room being the slowly building and seething rage of the two gunmen who act without evident provocation. And yet, had he done that, it would have been difficult to make it through the first 30 minutes without falling asleep.

Another problem is this high school itself. It is apparently run by people who have no idea of how to run a school. Students wander around at random. There are entire major sections of the school that are apparently unused and where students can just go walk around and hang out. The time throughout doesn’t seem to make any sense. I can’t tell if all of this is taking place at the start of a school day (since students seem to be arriving constantly) or in the middle of the day (since students are at lunch). It doesn’t make any sense to me.

The biggest issue I have with Elephant is that it’s pretentious. I’d like to think that Gus Van Sant was going for pathos and reality and simply missed the mark, but I can’t be certain. The film seems to know that it’s a message film of some sort, although it never really explicitly states the message (a fact I rather appreciate). Because it’s an important message film, though, it’s filmed in a way to suggest that it is so important. We’re supposed to know with the long, artistic tracking shots that Gus Van Sant is Genuinely Very Serious. It falls flat not because it’s serious, but because it’s the sort of film that says if you don’t appreciate the message and have a thought-provoking discussion after seeing it, you’re probably a bad person.

The town I live in has survived a school shooting. On Valentine’s Day in 2008, a former student showed up at Northern Illinois University and gunned down five people, injured another couple of dozen, and then turned the gun on himself. Two years before that incident, I had an office that overlooked the building where the shooting took place. I had a daughter in daycare two or three blocks away. It was a bad day to live in DeKalb. We tend to get forgotten in the list of school shootings sickeningly enough because of the relatively low body count. That says more about the problem and our media than Elephant ever could.

Where Van Sant gets things right is that it was an otherwise normal day. There was nothing really special about the day until it was suddenly and tragically terrible. But for as much as he gets that right, he errs far too far on the side of art instead of on the side of human tragedy where this story belongs.

Why to watch Elephant: A serious topic that we need to deal with no matter how much we wish we didn’t.
Why not to watch: Gus Van Sant aims for pathos and hits pretension instead.