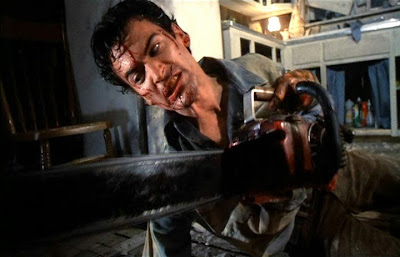 I had a birthday recently. My family bought me a Nook. The new Nooks are essentially tablets; they still have the e-reader capabilities of the old ones, of course, but the new ones are all about tapping in to that tablet market. The other night, I downloaded the NetFlix app and watched Double Indemnity as a test. It worked great. Today, I thought I’d go with a classic of a different sort. When I saw Evil Dead II appear on the streaming menu, I knew what I was watching today. I have holes in my personal collection. I don’t own Casablanca, for instance. If you pushed me, though, I’d say not owning a DVD copy of Evil Dead II is a bigger miss.

Evil Dead II is less a sequel of the original Evil Dead and much more a remake with much more slapstick and comedic sensibilities. It doesn’t so much pick up from where the first film left as retell the first story quickly and with far fewer characters and then spin off from there. In this version, Ash Williams (Bruce Campbell) and his girlfriend Linda (Denise Bixler) retreat to a secluded cabin in the middle of nowhere. As it turns out, the cabin was being used by a professor and his wife to translate an ancient book called the Necronomicon. Reading the passages aloud causes a demon to escape and possess the wife of the professor. Ash and Linda know none of this, of course, but when Ash finds the professor’s tape recording and plays it, Linda is possessed. Ash kills here and then is prevented from leaving the cabin, meaning that the terrible events may well play out again.

Ash spends the day dealing with everything that has happened around him, going slightly crazy, and having his hand become possessed. In one of the more famous scenes in the film, Ash’s hand tries to kill him, and Ash retaliates by lopping it off with a chainsaw. In the meantime, the professor’s daughter Annie (Sarah Barry) and her assistant/love interest Ed (Richard Domeier) are trying to get to the cabin with newly discovered pages from the Necronomicon. Because the bridge has been destroyed, they can’t get there. Instead, they are led there by Jake (Dan Hicks) and Bobby Joe (Kassie Wesley DePaiva), a redneck hillbilly couple.

What happens can be pretty easily imagined. The four new arrivals find Ash and a bloody chainsaw and assume the worst. They shove Ash into the cellar, not realizing that this is where the dead body of the professor’s wife Henrietta (played in undead mode by director Sam Raimi’s brother Ted) is buried. She awakens, Ash comes up from the basement, and all manner of over-the-top, blood-filled insanity happens. Everyone gets picked off one by one. There’s another implied tree rape, someone gets hacked apart with an axe, there’s a stabbing or two, and eventually the film comes to the sort of end that only Bruce Campbell and Sam Raimi could devise for their schlub of a hero, Ash Williams.

I won’t go into details here, because Evil Dead II isn’t really a film that works on knowing about the plot. More or less, it’s a chance to see something astonishingly gory that is simultaneously homage to the Three Stooges. One of the evident central ideas to the film is that if a quart of blood is good and a gallon of blood is better, a fire hose filled with blood will be the best of all. Blood erupts in massive geysers, spraying over everyone in the room. It comes in red, green, black, and any other color Raimi wanted. There isn’t any attempt to make this real. In fact, most of the effects (except for the Henrietta monster at the end) are ridiculously cheap. But it doesn’t matter, because this isn’t about the effects; it’s about the inventiveness of the filmmaker.

Anyone who has followed Raimi’s career can see exactly where he got a lot of his signature camera angles and shots—he tried them in the first two Evil Dead films first. It’s pretty easy to tell that Raimi is still a young filmmaker with this film. He learned from Evil Dead and put a lot of what he learned into this one.

It might be too much to call Evil Dead II a great film in the sense of classic films considered important to explaining the human condition. This isn’t that kind of film at all. It’s great in the way people who love horror movies use the word. It’s ridiculously fun, spectacularly bloody, filled with great moments of slapstick humor, and enjoyable from start to finish.

It’s worth saying a little bit about the character of Ashley J. Williams, the creation of Raimi and Campbell. In Evil Dead, Ash is merely the one who survives. In this film and even more in Army of Darkness, the third film in the series, Ash is a comic hero and close to a perfect loser. Ash is a terrible loser except in those moments when he is fighting terrible evil. He screws everything up except when everything is on the line. In those moments, he is one of the truly great action and horror heroes.

I do love this film. I love it despite the cheese, despite the obvious places where the effects show through and you can see the strings. It’s tons of fun, and a lot of the time, that’s all you really want from a horror movie.

Why to watch Evil Dead II: Because it’s damn awesome.
Why not to watch: It’s cheesy as hell.