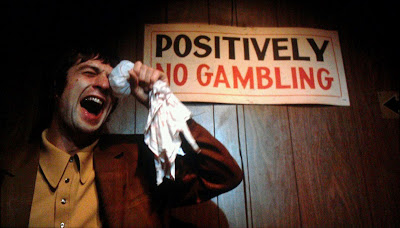 If someone told me that he or she thought Martin Scorsese is the greatest living film director, I’d be hard pressed to disagree. He may or may not be my choice, depending on the day and my mood, but he certainly wouldn’t be a bad choice for that honor. The thing about great directors, though, is they all started somewhere, and their beginnings aren’t always what we might hope. Such is the case with Scorsese and his film Mean Streets.

Charlie (Harvey Keitel) is a low-ranking member of a mob family in New York. The bulk of his job is collecting on debts for his uncle. His personal time is spent watching out for his friend Johnny Boy (Robert De Niro) and spending time with his girlfriend Teresa (Amy Robinson), Johnny Boy’s cousin. Johnny Boy is a punk and a small-time gambler who owes money to virtually every loan shark in the area. He’s also out of control of his emotions and actions most of the time. Teresa is an epileptic, which makes her something of a pariah, meaning that Charlie needs to keep their relationship quiet, since his uncle and other members of the mob don’t like her around.

As the story progresses, Johnny Boy becomes more and more self-destructive, crazy, and violent. Charlie finds his own Catholicism to be at odds with what he does for a living. Specifically, he wonders about the penance he is regularly assigned by his priest. It never seems right to him, and he’d prefer to handle penance in his own way. At times, he does this by holding his hand over a flame to simulate the fires of Hell. As the story moves on, his penance more and more becomes protecting Johnny Boy from the people to whom he owes money, particularly Michael (Richard Romanus).

Eventually, Johnny Boy loses it completely, going so far as to insult Michael and pulling a gun on him. At that point, Charlie decides it’s time to get Johnny out of town, only to be pursued by a now murderous Michael.

That’s genuinely it. Mean Streets is pretty plot-thin. A lot of time is spent watching Charlie and Johnny Boy interacting with other people without any of it having much significance to the overall story. It’s not so much that the story is slow; it’s more that it’s simply unfocused. An epic fistfight in a pool hall doesn’t really do much but show that Johnny Boy is becoming more and more unhinged, but it takes too much time to demonstrate something ultimately pretty simple. While the film isn’t long, it feels fat in places, like a good editing would smooth it out and make it far more watchable.

That’s really the main problem here. Mean Streets isn’t a bad film. It has a lot of what would become signature Scorsese elements in films and it’s evident that even at this very early stage in his career, Scorsese had a lot of good ideas and a lot of talent. What he didn’t have was experience, and that lack of experience shows up over and over throughout the film. The uneven pacing is just a part of the problem. There are a number of places where the post-production work on the sound is incredibly evident. Whole chunks of dialogue have a completely different vocal quality to them, making large sections of the film feel artificial and canned. Scenes take too long to resolve, and the story is pretty muddy anyway.

In the final analysis, Mean Streets is an interesting effort, if one that isn’t completely successful all the way through. It’s hard to call it a complete failure. As mentioned above, there are some good ideas here even if the film isn’t able to really capitalize on all of them. The lack of focus makes this a saggy film that could stand a solid trimming. With 10 or 15 minutes clipped out here and there, it would be much more watchable, tighter, and much more exciting.

That said, it’s still worth your time. The reasons for that are both simple and obvious. First, it’s fun to see De Niro and Keitel at such an early stage. They both look like high school versions of themselves today. Seeing a young De Niro still learning his chops is worth the time. The same is true of Scorsese himself. Mean Streets will never make my top 100 and it probably wouldn’t make my top 10 for Scorsese’s films. It does, however, demonstrate a line from Scoresese’s direction here all the way through to the modern era.

In short, Mean Streets is an interesting look at the post-noir era and the rise of one of the world’s great directors. Watch it for that; you don’t need another reason.

Why to watch Mean Streets: Because it’s Scorsese.
Why not to watch: It’s Scorsese before he knew anything.