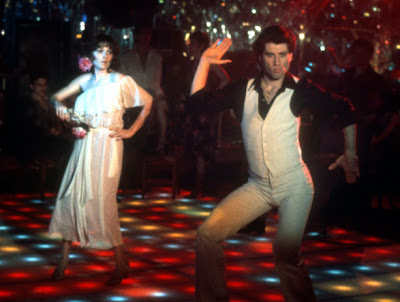 Sometimes it seems hard to believe that in the late 1970s, John Travolta could do no wrong. He was already a face known to the American public in 1977 when he made Saturday Night Fever thanks to his regular role on “Welcome Back, Kotter.” But it was Saturday Night Fever that turned him into a star. If you had a teenaged sister in the late ‘70s, she had the LP of the soundtrack and probably had the iconic poster of Travolta in the white suit with the black shirt on the dance floor. You couldn’t get away from it; that poster was as common in girls’ rooms as the Farrah Fawcett poster was in boys’ rooms. And the Bee Gees were friggin’ everywhere.

Saturday Night Fever is a relatively simple movie. It’s little more than a standard coming of age story set a bit older in the character’s life than is typical for the genre. Tony Manero (Travolta) is a working class schlub in New York. He spends his days in a paint store and one night a week shaking it on the dance floor at a disco called 2001 Odyssey. It’s on this one night a week that Tony really lives. He’s the king of the dance floor and his friends are merely hangers on for the awesomeness that is Tony.

Things change with Tony when he encounters Stephanie (Karen Lynn Gorney), a dancer who may be as good as he is. He learns that the disco is having a dance contest and is propositioned by Annette (Donna Pescow) to partner with her. Tony agrees, but immediately pursues Stephanie as a partner. He presses hard and gets her to finally agree under the same conditions that he had created for Annette: it’s all about the dancing and not about any sort of relationship, including sex.

For Tony, the only place he’s really at home is the one night a week dancing and then when he’s practicing with Stephanie. At home, he’s the bad son compared with his brother Frank (Martin Shakar), who is a priest. The family is thrown into turmoil when Frank quits the priesthood and returns home, not sure of what to do with himself. Meanwhile, Tony’s friend Gus (Bruce Ornstein) is attacked by a gang, which gets Tony and his friends into trouble with a Hispanic gang that Gus implicates in his beating. Bobby C. (Barry Miller) has gotten his girlfriend pregnant and isn’t sure what to do next and just wants Tony (who he idolizes) to take care of everything for him.

Everything comes down to a trio of events. First, Tony and his friends raid the gang hideout of the Barracudas only to discover later that Gus isn’t sure if they were the ones who hurt him. Second, Tony and Stephanie are out-danced in the competition by a Puerto Rican couple but win anyway, probably due to racism. Tony’s frustration at this causes him to attempt to rape Stephanie. Third, two of Tony’s friends end up drugging and date-raping Annette and Bobby C. letting all of his mounting pressures finally get the better of him.

The relationship between Tony and Stephanie is the most interesting one in the film. Stephanie is something of a stereotype—she puts on airs and likes to think she’s punching above her weight. Nothing and no one is good enough for her and her entire persona is one of attempting to not specifically impress Tony but to keep him in awe of her. For Tony’s part, Stephanie is the one woman in the film other than his mother or grandmother who doesn’t appear to want to have sex with him. For Tony, this makes her both interesting and frustrating. He continues to pursue her clumsily and as best he can because he honestly doesn’t know of another way to deal with a woman. When her façade finally breaks, he’s at a complete loss of how to handle it.

In terms of the story, Saturday Night Fever is nothing that special. It’s not bad (in fact, it’s pretty damn good), but the story isn’t breaking a lot of new ground. No, the reason this became such a phenomenon is the dancing. Disco was growing in the 1970s, but this film made it explode, and a great deal of that was due to just how damn good Travolta was on the dance floor. A lot of the dancing looks dated today. Okay, all of it looks dated by today’s standards. But at the time, no one was doing what Travolta did, and suddenly everyone wanted to.

It’s not hard to see why this became such a sensation. It’s an easy story to empathize with, and for the time, the dancing was like nothing else. And I’m just going to say it: whatever your opinion of disco and the Bee Gees, this is a hell of a good soundtrack.

Why to watch Saturday Night Fever: The coming-of-age film that defines the ‘70s.
Why not to watch: Too much Noo Yawk accent.