Chasing Its Own Tail 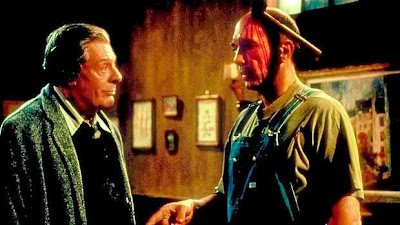 The last time I watched a Raoul Ruiz film, I was wildly disappointed. I absolutely hated Time Regained. It’s fair to suggest that most of my problems with it were technical; I couldn’t read the subtitles. It’s also fair to suggest that I didn’t see enough there to bother with it should I find a better copy. No, it was pretty, but there didn’t seem to be much there. There’s a reason I’ve put off Trois Vies et Une Seule Mort (Three Lives and Only One Death) until now. I haven’t trusted Ruiz to want to watch this one again.

What I got was not a confusing mess of poor subtitles, though. Trois Vies is a conundrum of a film, but not an unpleasant one. What we have is four stories, each featuring the great Marcello Mastroianni in one of his last roles…or four of his last roles if you’d rather have it that way. The four stories turn out to all be connected, but the connections are not obvious, and even when they become known, they don’t specifically make sense.

In the first story, a man leaves his house to buy cigarettes and discovers his wife’s ex-husband who disappeared 20 years previous. The man tells him a strange story about being captured in a house across the street and tricked by fairies who kept him prisoner there. For him, only a day passed while for the rest of the world, it was 20 years. What he wants is to swap places and reclaim his old life.

In the second story, a bachelor college professor suddenly decides to become a vagrant, and soon learns that he makes just as much money begging as he did teaching. He is rescued at one point by a prostitute who has her own strange past. The two become more and more involved with each other, but neither of them are really keen for an actual relationship, and she still needs to worry about her ex-husband who turned her to prostitution in the first place.

In the third story, a young and passionate but loosely-moraled couple receive money in the mail every week. Eventually, their benefactor dies and wills them a house. They are allowed to stay there provided they never fire the butler, who becomes more and more bizarre the longer they live in the house.

In the fourth and final story, a wealthy industrialist discovers that some of the women from his past have arrived in Paris to see him. This is all well and good except for the fact that in his opinion, the women don’t exist. He invented them for social or economic reasons, and as far as he is concerned, their arrival in Paris is impossible because they aren’t real. And yet they have arrived and are planning to see him. It is in this story that all of the other stories come together and we see more and more of the relationships of the various people and how all of their lives are strangely intertwined.

I can’t say for sure whether or not I really liked this film. It’s a film that is very easy to appreciate because of the intricacy of the plot and the way everything holds together. I’m certain tat I didn’t understand everything though, because it’s not designed to be easy to follow. I’m sure I got some of it, but not nearly everything that there is to dig out of the stories. I think it deserves another watch when I get the chance, and it might take two more to fully understand everything.

But maybe it doesn’t matter. Maybe it’s enough to simply enjoy the way it is filmed and how everything looks on the screen. Perhaps it’s enough to only get glimpses of the reality behind the stories and the surreality behind the reality. This is a film that has a meaning that can really only be seen when it isn’t in focus; you catch hints of the deeper story out of the corner of your eye and lose it when you turn your head to concentrate on it.

Raoul Ruiz has created something very slippery here, and I mean that in a positive way. I’m not sure this is a film that I’ll ever really love, but I did find myself very much entertained in my confusion.

Why to watch Trois Vies et Une Seule Mort: A continuing spiral of a story.
Why not to watch: It needs at least two viewings, and possibly three for full understanding.