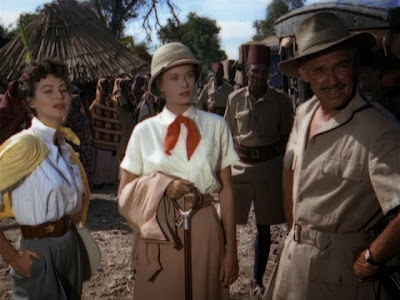 I wouldn’t call myself a huge fan of Clark Gable, but I do understand the appeal of the man on the screen. He was a player and a pimp. This may have been best demonstrated in Gone with the Wind, but I might enter Mogambo as Exhibit B. This is very much Gable’s picture because it couldn’t be anyone else’s. There is a strange provincial sense to Mogambo; it’s a boy’s own adventure film, but just as much a romance, and its depiction of both men and women are mildly sexist and offensive by today’s standards. That said, it’s still pretty entertaining.

Victor Marswell (Gable) runs a hunting/safari/trapping camp in East Africa. He collects game animals and ships them back to zoos in the rest of the world and takes people out on various expeditions. He is assisted in this by a number of native workers as well as John “Brownie” Brown-Pryce (Philip Stainton) and the crude and unmannered Boltchak (Eric Pohlmann). I mentioned that it’s a bit provincial, and that may be the wrong word for it. I can’t identify the guys who work at Marswell’s compound because they aren’t listed individually in the credits.

As the film opens up, we meet Eloise “Honey Bear” Kelly (Ava Gardner). She has arrived in the hopes of meeting up with a wealthy maharajah who has scampered off because of problems back home. There’s a personality clash between Kelly and Marswell, which in a film like this also means there is a great deal of attraction between them. They become a bit more comfortable with each other, and just when Kelly feels like she’s starting to belong, Marswell kicks her out. A boat back to civilization has arrived, and so have his new clients: Donald Nordley (Donald Sinden) and his wife Linda (Grace Kelly).

It can’t ever be that simple, though. Donald Nordley wants to head up to gorilla country and Marswell refuses to take him there. Worse, he has a reaction to the vaccination he received to ward off disease from tsetse flies. Just to add to the fun, Kelly returns because of a shipwreck. This sets up an interesting love triangle that pretty much doesn’t involve Donald Nordley. He’s completely unaware of the fact that his wife Linda is becoming attracted to the big game hunter, and the feeling is mutual. But Marswell is also attracted to Kelly—which is what he calls her. In fact, in Marswell’s world, it might well be a sign of his approval of her that he uses her last name instead of her first.

Mogambo is one of those films that tries to be everything for everyone. To put this in 1950s terms, it’s got the intense love triangle for the women and it’s got the African adventure story for the guys. Women who wanted to go to the movies and moon over Clark Gable and pretend to be either Ava Gardner or Grace Kelly could convince their boyfriends or husbands by promising big game hunting, gorillas and lions. What’s surprising is that it manages to be the best of both of these worlds pretty well. It’s far more the romantic drama than it is the adventure film; what it offers in terms of adventure feels sort of canned and predictable. We know that nothing too terrible is going to happen to the Great White Hunter after all, and there’s a twee aspect to things making him more of a trapper than someone who kills the animals. It hardly lives up to the cover art, which features a man-on-gorilla battle.

The biggest problem may well be the age differences of the stars and characters, the same sort of thing that has plagued many a Hollywood film. Clark Gable was 52 when this film was made. Ava Gardner was about 30 and Grace Kelly was a mere stripling in her early 20s. The same sort of thing still happens now, but it seemed much more prevalent at the time. It always strikes me me as creeperish.

Mogambo is very much a product of its time. Remade today, it would need some pretty significant changes. That’s okay. There is a real feeling of that lost Hollywood era here; it contains a charm of age and distance in time that would be sad to lose.

Like I said up top, I’m not the biggest fan of Gable. He was a good actor and a hell of a matinee idol, but my preferences in leading men of the time run differently. The same can be said of Ava Gardner, who generally leaves me a bit cold. She’s great in this, though. It’s Grace Kelly who feels like the weakest link, and much of that is her stereotypical prim British character.

For what it’s worth, Mogambo is entertaining, if predictable. It’s a fun Sunday morning film, one you can watch without paying it too much attention and still enjoy just as much as if you watched rapturously.

Why to watch Mogambo: African adventure of the type that doesn’t exist today and probably never did.
Why not to watch: It feels so naïve in the modern world.