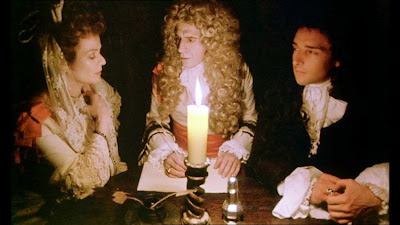 It wouldn’t be an overstatement to suggest that The Draughtsman’s Contract had an uphill struggle in getting me to appreciate it. The reason is that I haven’t fully come to trust Peter Greenaway as a director. I didn’t much love The Pillow Book and while I liked Drowning by Numbers, I didn’t like it a lot. The Cook, the Thief, His Wife, and Her Lover was visually interesting but ultimately fairly disgusting in a lot of respects. The common thread of those three films is sex (albeit less so in Drowning by Numbers). We aren’t going to stray very far from this topic in The Draughtsman’s Contract, either.

I liked this one, though. I liked it more than I’ve liked any of Greenaway’s other films, and by a pretty good distance. The reason for this is simple: this is a very clever film. A secondary, but just as important reason is that while a great deal of the surface focus is on sex, the sex here is legitimately a red herring for what is really going on. It’s there specifically to draw our attention to the prurience of what is happening and distract us from the larger story that is being told. It’s not often that a film this thoroughly surprises me in this way.

Virginia Herbert (Janet Suzman) wishes to have a series of drawings of her husband’s estate made as a gift for him. She wishes to engage the services of Neville (Anthony Higgins). Neville is pompous and assured of his own skills as a draughtsman and agrees to the job on a single condition—that every day while he works on the dozen drawings he is allowed to take whatever sexual advantage of her that he would like. She agrees, and has him come to the house when her husband will be gone for about two weeks.

What soon becomes evident is that Mr. Herbert may not in fact be out of town but dead. Despite Neville’s demands of keeping things in his line of sight clear and unaltered when he is drawing, certain items start appearing in his line of sight. These include articles of clothing from Mr. Herbert. Suspicions are aroused when half of the drawings are complete and the items are forever a part of the drawn landscape. Neville is approached by Virginia Herbert’s daughter, Mrs. Sarah Talmann (Anne-Louise Lambert). She proposes that she will protect Neville provided that he will submit to the same contractual obligation as her mother—that he be available for her pleasure. When Herbert is discovered dead, it some becomes evident that something untoward may well have happened to the man.

So, ultimately, what is presented to us as a film about sexual coercion is actually a sort of murder mystery with a sexual subplot. That’s not at all what I expected, and the revelation of what The Draughtsman’s Contract is really about was a pleasant surprise.

This is not devoid of Peter Greenaway’s typical strangeness. The main realization of this is in the appearance of a frequently naked man who is often not within the context of the actual story. There are moments when it appears that the other characters can see the naked statue man, but at other times, he merely observes what is going on.

What we slowly discover is that the desire to have Neville create the drawings happens for a number of reasons. Just as the sex demanded by Neville (and eventually by Sarah Talmann) is a red herring, so too are the drawings. Sarah’s husband is impotent, we learn, and Neville is thus put in service as a stud without his knowledge. Everything is being carefully manipulated behind the scenes by Sarah Talmann and Virginia Herbert. We learn the extent of this conspiracy and the level of their planning only at the end of the film at the same moment that Neville learns of everything.

I’m honestly surprised here. I fully expected this to be much like other Greenaway films I’ve seen in which the sex is front and center and controls the entirety of the plot. That’s not the case here. The bulk of the nudity, in fact, is the statue man; there’s very little otherwise, and very little actual sex. Most of the time, we see the very beginnings of sex and the scene cuts away. It’s surprisingly tasteful for a Greenaway film.

What is consistent with other Greenaway films is remarkable cruelty of the film. Greenaway seems to have no time for niceties, which is one of the reasons the sex in his films is often so ugly and callous. The Draughtsman’s Contract is a callous film without doubt, and it’s intended to be so. It’s also pretty good.

Why to watch The Draughtsman’s Contract: A subtle and engaging mystery.
Why not to watch: The ending is pretty heartless.