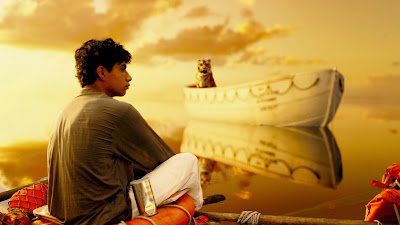 I like Ang Lee’s films. There’s even a part of me that sort of appreciates what he tried to do with Hulk. I mean, yes, it failed completely, but I get what he was going for, I think. Life of Pi is one that I’ve been looking forward to for some time. I’m not sure I was as prepared for the spiritual questions it would bring up in the course of the film. What I wanted was visual spectacle. I got that, but Life of Pi is a special enough film that I got more than that as well. When the religious content of the film, the abruptly and plainly stated “make me believe in God” said by one character to another happened, I figured I knew the ending, and determined that much of my overall opinion of the film might well be determined by how that line played out.

What we get is a story told in the present day about the past, meaning that we frequently will get flashes of the current world while we tend to spend most of our time dealing with the story being told. It is told by Piscine Molitor Patel (played in the modern world by Irrfan Khan and primarily in the story by Suraj Sharma). Piscine spends much of his early life with the unfortunate nickname of “Pissing Patel” until he consciously forces himself to memorize hundreds of digits of pi, and rechristens himself Pi. We learn about his swimming lessons from his father’s friend Mamaji and the family’s occupation of running a zoo. We also learn of his spiritual life. Raised a Hindu by his mother, he also adopts both Christianity and Islam, much to his rationalist father’s chagrin. All of this is being told to a writer (Rafe Spall) who encountered Mamaji, who told him to go to Canada and look up Pi.

Anyway, when Pi is a young man, his father decides to move the family and the zoo to Canada. On the ship voyage, the ship sinks in a terrible storm. Pi, now without his family, finds himself on a lifeboat with a zebra, an orangutan, and a hyena. The hyena kills the other two animals, and when Pi gets to the point of having to deal with things, he discovers that he also shares the lifeboat with Richard Parker, an adult Bengal tiger that kills the hyena.

The rest of the film is, more or less, Pi and Richard Parker learning to live with each other’s presence and survive in the ocean as they drift across the Pacific. This involves a great deal of fantasy including an island that appears to be itself a dangerous living thing. It’s not meant to be anything other than a sort of modern-day myth. It’s not really meant to be taken literally.

Fortunately, we’re given an alternate explanation of what happened, a version that manages to do away with all of the mysticism and offers a much more believable chain of events. The film also, wisely, allows us to decide which of those two stories we will choose to believe. One of those is more likely real, and in the world of the film almost certainly is the real story. The other, we are forced to agree is the better story.

The sell here isn’t the story, but the visuals. It is terribly beautiful, the sort of magical realism that can only truly be realized by a visionary director. It is visually stunning. It shows both the strengths and the weaknesses of a film that depends on computer-generated visuals. Richard Parker is the most constant and most surprising visual effect, and he frequently looks incredibly real. Except when he doesn’t. There are moments when Richard Parker’s digital source is very obvious. This sadly breaks the spell until the very end, when Pi’s alternate version of the story that more or less explains what may have been the real source of Richard Parker.

Unsurprisingly, the spiritual message falls flat with me; it’s the same problem I have with many a religious parable of any faith. The god who comes to the rescue of Pi Patel and watches his suffering and in Pi’s own words keeps him alive for some purpose had no problem watching the rest of the people on the ship die horribly. This is the same god who gets credit for someone’s survival in the midst of tragedy and not a shred of blame for the losses in the same event. It is essentially solipsistic and a selfish belief, and an immediate turn-off for me.

The good news is that I was wrong in how I guessed it would end, and that’s something that greatly redeems whatever message Pi himself takes from either version of his harrowing voyage. It would take a single line of dialogue to spoil the film for me, and Ang Lee wisely didn’t include it, allowing the audience to choose for itself individually.

It’s not my favorite Ang Lee film. I give it a great deal of credit for being gorgeous, but it ultimately fails for me on its proposed deepest level. It may well be the best possible version of something that seems unfilmable. That’s no one’s fault, really. I think it’s as good as it can be and I don’t know that I would pick a different director for it. That’s going to have to be good enough.

Why to watch Life of Pi: It’s the prettiest thing you’ve ever seen.
Why not to watch: The theological message is nothing new, and very unpleasant at its heart.