Film: A Beautiful Mind
Format: DVD from NetFlix on laptop. 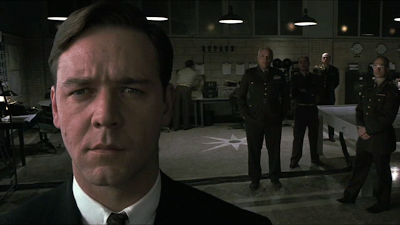 It’s been some time since I’ve seen A Beautiful Mind. Depending on how you look at it, I’ve either been saving in for close to the end of watching/rewatching all of the Best Picture winners or I’ve been avoiding it. Avoiding it might be closer to the truth. I don’t dislike this film, but I don’t love it, either. I know the license it takes with the actual history of John Nash. More to the point, I know where the different beats come in the story. This is one of those films that works once. It doesn’t carry over nearly as well to a second viewing. This is a film that requires spoiling to really discuss, so consider the rest of this review under a spoiler tab.

We’re shown the life of John Nash (Russell Crowe), who won a Nobel Prize for his work on game theory. The film shows his triumphs and his personal tragedies, namely his struggle with schizophrenia. The real John Nash suffered from auditory hallucinations. This version of Nash has visual ones as well. I imagine this is because giving us visual hallucinations gives us something to look at.

Anyway, we start with Nash in college at Princeton, where he struggles with publishing, since he really wants an original idea to call his own. The only thing that seems to keep him sane is his roommate, Charles (Paul Bettany). Eventually, he stumbles upon the idea of governing dynamics in economics, overturning 150 years of economic ideas, and leading to a position at MIT. He is sometimes called to the Pentagon to work on cryptography problems. He is also sometimes asked to teach. It is in this capacity that he meets the two most important people in his life. The first is Alicia (Jennifer Connelly), a student who he eventually marries. The second is Parcher (Ed Harris), a government official.

Parcher “hires” Nash to look through various issues of periodicals, looking for patterns under the pretense of breaking a Soviet code regarding the movements of a portable nuclear device and its potential arrival and detonation in the United States. Nash becomes more and more paranoid, particularly when he is tailed to the drop point where he leaves his latest research. A few gun battles and a suddenly pregnant wife, and Nash’s world begins to spiral inward on him.

Of course, none of this is real. Parcher is a figment of Nash’s imagination. It turns out that his old college roommate Charles is similarly not real, which also means that Charles’s niece Marcee (Vivien Cardone) is similarly a phantom. In fact, all of the top secret work that Nash has been doing has been a product of his own fancy. None of it, none of the supposed patterns he finds in various magazines, the mobile bomb, the plots against his life, is real. It’s determined that Nash is schizophrenic and suffering from paranoia. When the medication he is forced to take interferes with his mental abilities, he stops taking it, and Parcher returns. Eventually, when he puts the life of his own child in danger because of his delusions, more drastic action is required.

We’re given something like a happy ending, of course. Nash did, after all, eventually win a Nobel Prize for his work. But really, the whole film is about his constant battle with his own mental demons and inability to separate fact from fantasy. The film glosses over his illegitimate child and his divorce, concentrating instead on giving us a more sanitized, wholesome, and life-affirming version of John Nash. As I think about it, I’m not too upset by this. There’s no reason for us to have a warts-and-all biopic of the man. His inner demons and eventual success are far more interesting.

And that’s really the problem here. Once we know that John Nash has a wonky mental elevator that goes to some floors that no one else has, the movie doesn’t work again. I enjoyed this much more the first time I watched it because I didn’t know where it was going to go. I bought into the espionage as much as Nash did. The second time through, I know what’s real and what isn’t, and it simply doesn’t play as well. I wanted the fantasy world to end, and it just kept going and going.

I think based on this, it’s easy to see why this film was as lauded as it was when it first came out and why no one talks about it that much any more. Once you’ve seen it once, you’re pretty much done with it. There are movies that are entertaining in a different way the second time around. Fight Club comes to mind immediately. This one doesn’t have that luxury, and that’s a disappointment. While it might have seemed a good Best Picture choice at the time, the fact that it really isn’t that rewatchable makes it feel like one that should have been second guessed.

Why to watch A Beautiful Mind: Genius is worth watching, even if it’s not really understandable.
Why not to watch: There’s nothing to get from repeated viewings.