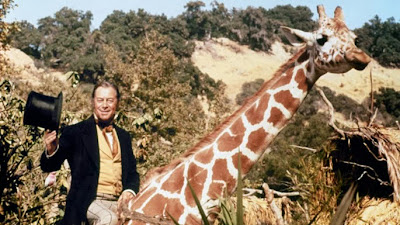 When I was little, I had a Doctor Dolittle book that I read pretty frequently. I liked the idea of Doctor Dolittle perhaps more than I liked that particular story. I was feeling nostalgic, and since the 1967 version of Doctor Dolittle, which follows the story with which I was familiar was streaming, I decided it was worth watching. I didn’t realize just how long this film is, but once I’d started I was too far into it to turn back.

In the early part of the Victorian era, Doctor John Dolittle (Rex Harrison) is a physician turned veterinarian since he’s decided that he genuinely likes animals and simply doesn’t understand people. He does understand animals, though, in a very literal fashion. Dolittle can literally speak to animals, and is fluent in hundreds of animal languages. These have been taught to him by his parrot, Polynesia (voiced by an uncredited Ginny Tyler). Dolittle frequently goes on jaunts around the world to help animals or to discover new ones. As the film starts, his dream is to find a legendary giant pink sea snail. The problem is that the doesn’t have the money to go, and as a doctor who treats animals on their own terms rather than dealing with any humans who might own them, he’s not likely to get any more.

He is visited by his friend Matthew Mugg (Anthony Newley) and young Tommy Stubbins (William Dix) with an injured duck. The pair end up spending the night because of a thunderstorm, so they see the confrontation the next morning when Dolittle is accused by the local magistrate (Peter Bull) of horse thievery (Dolittle was treating his horse) and for protecting the fox during the magistrates latest fox hunt. This runs him afoul of the magistrate’s niece Emma Fairfax (Samantha Eggar). Emma decides she doesn’t like the doctor. The doctor is pretty ambivalent toward her, as he is with most people. Matthew is immediately entranced by her.

To help finance his trip, Dolittle is given a pushmi-pullyu by a friend. This is basically a llama with a head on either end. He strikes a deal with a local circus to exhibit the animal, and raises money that way. He also helps a seal to escape and get back to her husband, but in so doing is accused of several crimes. He gets off those charges, but his seeming oddness gets him thrown into a mental institution. His animal friends help him escape, and soon he is off on his adventure with Matthew and Stubbins, and with Emma stowing away on the ship. What follows is a shipwreck, finding the wandering Sea Star Island, which floats across the water, and a number of run-ins with the natives before John Dolittle finally finds his giant pink sea snail and there are happy endings all ‘round.

Rex Harrison is basically reprising his role from My Fair Lady here. John Dolittle and Henry Higgins are the same guy. Both are completely caught up in their work and are immune to the charms of the fairer sex until they suddenly realize that they aren’t. The song Harrison sing/talks when he realizes this about Emma is essentially the close cousin of “I’ve Grown Accustomed to Her Face.”

When the group arrives at Sea Star Island, I’m kind of conflicted about how to feel. On the one hand, the natives of the island are identical to Hollywood stereotype of Africans in appearance. The natives are also particularly hidebound by tradition, and that’s mildly upsetting, too. On the other hand, once we get to talking with the natives, we find them erudite and well-read, which is a welcome change from expectations. The islanders name their children after their favorite authors, so the leader of the island is named William Shakespeare X (Geoffrey Holder). In a staggering moment of non-racism, “Willy” tells Dolittle and companions that they were tossed into jail upon arrival out of precaution. All of the previous white visitors to the island started killing people without wanting to talk first, and then left because they couldn’t stand the peace and quiet. For a film that depicts the natives in loincloths and feathers, that was surprisingly refreshing.

In all honesty, Doctor Dolittle is pretty harmless family fare. It’s very similar in a lot of ways to Willy Wonka and the Chocolate Factory without going into the dark territory that film does. The overall feel, the fantasy elements, are very much the same. I wonder, though, if this film isn’t locked into its own time period. With the state of current family entertainment, Doctor Dolittle very much looks like a film made almost 50 years ago. The wonder it may have once inspired seems paltry compared with modern spectacles. That’s a shame, because it is cute and fun and the songs are pretty good in general.

Doctor Dolittle might still have the power to enchant very young kids, but it will remain a film more interesting for nostalgia purposes than for entertaining the little ones, I fear.

Why to watch Doctor Dolittle: It’s harmless and cute family entertainment.
Why not to watch: Time has definitely passed it by.