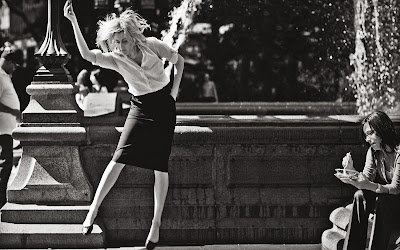 The goal of a movie review is, at least in part, to define the movie in question. With something like Frances Ha, that’s a difficult proposition, because Frances Ha is at least in part indefinable. This is a film that needs to be felt more than understood consciously. It takes on the entirety of the hipster generation, and the fact that the hopes and dreams of that generation are already fading, leaving yet again a collection of 20-somethings in exactly the same position of the previous generations—we’re all convinced that we’re important and going to change the world, and we’re going to do this by essentially standing still.

All of this takes place through the lens of Frances (Greta Gerwig, who co-wrote the script with director Noah Baumbach). Frances wants to be a professional modern dancer, and is in the way that most people who want that profession are—she’s an understudy/trainee for a dance company and she teaches ballet to children. Her world is wrapped tightly with her friend and roommate Sophie (Mickey Sumner). Frances even breaks up with her boyfriend Dan (Michael Esper) when he asks her to move in with him, opting instead to stay with Sophie.

So it comes as a slap in the face when Sophie abandons Frances for an apartment with someone else because she likes the neighborhood. Sophie leaves, and the friendship takes a difficult and painful turn, and forces Frances to move in with Lev (Adam Driver), a child of wealth who styles himself a sculptor, and Benji (Michael Zegen), who flirts with writing spec scenes for Saturday Night Live and complains about the quality of the show. When Frances is cut from the Christmas show of her dance company, she wonders how she will keep her world together. And so she flails, going home to Sacramento for Christmas and going to Paris by herself as a way to define herself and give herself value.

In a sense, Frances Ha is about Frances learning to be Frances and equally learning to be okay with that. More than anything, it’s about her growing up in a real sense. For much of the film, she’s a late-20s child, an adolescent in the body of a woman. When that world that she has built around her crumbles into nothing and all of the people and dreams and plans she has created to buffer her against the reality of the world disappear, she’s left with only herself, and the decision to either live in that reality, create a new fantasy world around her, or crumble. The whole point of the film is that she opts for the first choice rather than the unhealthy second or the tragic third.

The strength of Frances Ha is also its biggest problem: Frances herself. It’s not that she’s unlikable; it’s more that she’s not someone I would really want to know. Aimlessness and desire in lieu of effort aren’t positive traits, and that describes her through the majority of the film. At the same time, because of this, Frances comes off as perfectly real. She’s not “movie wacky” where her negative character traits are extreme and defining in the sense that they are all exists about her. Frances is very much the kind of person you’d see kicking around a college campus, older by a few years than most of the students because she just can’t get the bat off her shoulder. I don’t doubt her reality for a minute, and as much as I may shake my head at the world she lives in and wants to live in, I can’t help but empathize.

I appreciate a lot of what was done here. I love the decision to film in black-and-white, adding another layer of connection to the French New Wave. But I wonder if I’m simply too old to really understand it the way it needs to be understood. I get it, but I’m not sure I can really feel it the way it needs to be felt—in Heinlein terms, I don’t think I’m capable of grokking it. But I’m close. It reminds me of a conversation I had with a former co-worker who told me he had decided to live his life the way he wanted when he discovered that he hadn’t saved the world by his 25th birthday. That’s the realization, in a sense, that Frances comes to, and if this had gone anywhere else, I’d have hated it.

Why to watch Frances Ha: French New Wave made modern and more relevant for today.
Why not to watch: The main character is as infuriating as she is sympathetic.