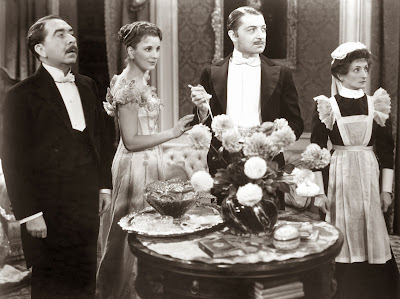 Of all of the Best Picture winners, Cavalcade is the one that is nearly impossible to find. I mean, I located it in nearly a dozen parts on YouTube, but if you want a DVD version, you’re pretty much out of luck. There evidently is a Blu-Ray release, but I’m not dropping $20 on something sight-unseen just because it happened to win Best Picture 80 years ago. I gave it as much leeway as I could; the audio was a touch out of step with the video, so it was a bit disconcerting.

There’s not a ton here in terms of a plot or much to summarize. The film is called Cavalcade because it presents a sweep of world history—30 plus years of it—through the eyes of the Marryot family of London. We get one of the Boer Wars, the end of the Victorian era, the sinking of the Titanic, and World War I, among other events, not as they were experienced by the world, but specifically as they affected the wealthy Marryots and their social circle.

We start with the introduction of the new century, New Year’s Eve 1899, and the Boer War. Robert Marryot (Clive Brook) heads off to war, leaving his wife Jane (Diana Wynyard) behind to look after their children. Also off to the war is the family butler Alfred Bridges (Herbert Mundin), who leaves behind the Marryot’s maid, Ellen (Una O’Connor, best remembered from her shrill roles in The Adventures of Robin Hood and Bride of Frankenstein). Do we get to see the battles? No, we do not. Instead, we get to see Jane crying about her brother and her husband off in the war and we get to see them head off to a far too patriotic stage show and a number of overly-earnest professions of love between the Marryots. Honestly, the stage show felt like a way to shove a couple of musical numbers into the film.

Eventually, the men come home, and get home just as Queen Victoria is days away from breathing her last, an event that is honestly much more historically important than changing the digits at the start of the year. I mention this because the film certainly takes this event quite seriously. We get minutes of Queen Victoria’s funeral cortege as it wanders past the Marryot house. As per usual, we don’t actually see it; we just see the Marryots reacting to it.

And so it goes. It’s all so fucking British. I consider myself something of an Anglophile, but I was completely put out by it. If Jane Marryot were any stiffer, she’d have starch running through her veins. It only gets worse when Robert gets knighted and she becomes Lady Marryot.

That’s the biggest problem I have with this film—it’s not so much a cavalcade of history as it is a parade of caricatures. When Bridges buys a pub, he immediately becomes a drunk. Why? Because he’s working class and should’ve been happy as a servant instead of trying to be his own boss. And rather than give him a chance at redemption, when he becomes embarrassing, it’s easier to just have him run over by a carriage. The whole proceeding is one of the most class-conscious things I’ve ever seen. Try to move above your station, and Cavalcade will slap that shit out of you straight away. Only those born and bred to society are deserving of anything above their own station.

I’ve seen most of the Best Picture winners now. There are certainly those that I’ve disliked more than Cavalcade. This film isn’t nearly as morally repugnant as Gigi, as overblown and silly as The Greatest Show on Eart or as blustery as Cimarraon, but I haven’t encountered one as dead boring as Cavalcade is. At times, it was difficult to concentrate. All that happens is people talk. When two of the characters wind up on Titanic, we see nothing except another damn conversation. It naturally presages what will happen to the ship. We’re left to imagine what happens. When the younger of the Marryot boys marches off to World War I, we get nothing but a montage of guys marching and a some overlays of people dying almost comically. And it goes on too long.

I can’t fail to discuss Fanny Bridges (Ursula Jeans) for a bit. Fanny is the daughter of Alfred and Ellen who eventually becomes a professional dancer. We get to see a little of her dancing; everyone goes crazy for it despite the fact that I think I could perform most of her steps. All she does is sway and kick her legs, and suddenly she’s a top star. Most of the time in a film like this, at least the people who end up on stage actually have a modicum of talent.

It’s almost as if Cavalcade tries so hard to be as stiff upper lip British as it can be that it’s afraid to actually show much of anything. Despite the broad waves of history and world-shattering events that it claims to include, it plays itself off as little more than a drawing room drama.

Why to watch Cavalcade: The sweep of history in two hours.
Why not to watch: Could it be any duller?