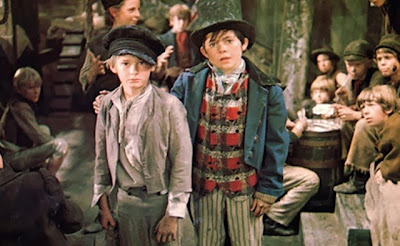 Much like Going My Way, which I watched a couple of months ago, I had seen Oliver! before this viewing. This was another film that played regularly on the local station on Sunday afternoons. It would be unfair to suggest that I remembered much of it, though. It’s seriously been more than three decades since I’d last seen it. I remembered a couple of the songs, but that was it. Oliver! is the last Oscar gasp of Old Hollywood, the final clinging bit of glory before everything changed the next year—it’s also the last family (read: G-rated) film to win Best Picture.

Now that I’ve said that, it is the damnedest film to place in its intent. I mean, this is a film about an orphan who is terribly abused and mistreated his entire life, and yet it’s filled with jaunty musical numbers. I won’t say that Oliver! glamorizes the plight of our poor wretch Oliver Twist (Mark Lester), but it certainly makes light of it. It’s bizarre to watch hungry waifs singing and dancing. It’s worth saying that I’m not a fan of Charles Dickens, who wrote the original story. I think it’s evident that Dickens was paid by the word, and the term “Dickensian coincidence” exists for a reason.

Poor little orphaned waif Oliver Twist lives in a workhouse where he is mistreated and fed gruel. Goaded by his fellow orphans, Oliver asks for a second helping of food and is summarily sold off to an undertaker. When there is friction between Oliver and the others at the undertakers, he runs off and makes his way to London. In London, he encounters a young pickpocket nicknamed the Artful Dodger (Jack Wild), who he befriends. Dodger takes Oliver to meet Fagin (Ron Moody), a miser who runs a gang of pickpockets. Fagin also serves as a fence for the cruel Bill Sikes (Oliver Reed).

Bill is a thief, and is completely heartless. He’s cruel to everyone, including Nancy (Shani Wallis), who loves him. Nancy becomes entranced with Oliver’s irresistible charms, which makes it sadder for her when Oliver is mistakenly taken for a pickpocket during the Artful Dodger’s typical workday. He’s dragged off to court but is rescued at the last minute thanks to the testimony of a shopkeeper who saw that Oliver had nothing to do with the pickpocketing. Both Fagin and Bill are worried by this, though, since Oliver is taken into the house of the man who originally accused him. Should Oliver say anything about the thieving operation, both of them will end up on the business end of a noose.

However, since this is a tale based on a Dickens story, we need to locate the coincidence. And here it is: Mr. Brownlow (Joseph O’Conor), who takes in Oliver, recognizes the boy’s resemblance to his long lost niece, and it’s not long before we learn that this is exactly who Oliver's mother is (thanks, Kevin). Of course, there’s plenty of nastiness coming from Bill Sikes wanting to steal the boy back and toss him into a life of crime again to protect himself, and lots of self-sacrifice from Nancy, and something like a happy ending all around for those who deserve it, save poor Nancy herself.

So that’s the basic plot, but as I said a few paragraphs ago, I can’t for the life of me fathom the purpose of this film. Everything that happens here is pain and misery until the end, but it’s filled with jaunty and happy tunes throughout. I’d be the first to admit that, my general opinion on musicals or not, a lot of these songs are damn good. They just don’t always seem that appropriate to the story being told. With a film like, say, Les Miserables, I’m not a fan of the story, but at least the songs seem to fit the mood. Here, the songs seem to be in direct opposition to the story. It’s rollicking family entertainment about destitute orphans and vicious criminals.

Mark Lester’s part as Oliver seems to consist of looking as adorable as possible at all times. Frequently, all he does is stand there and smile while things go on around him.

It’s hard for me to judge Oliver! in any objective way. This is not a film I’d choose to watch again because I don’t much like the story of it, nor do I much care for the characters. On the other hand, some of the musical numbers are truly spectacular. Ron Moody’s Fagin is one of the great musical characters in the history of film, and I’d be remiss in not suggesting that the main value of Oliver! rests on his oily charms. In fact, while the musical numbers may not always feel appropriate to the story, they are amazingly staged.

And so, Oliver! is grand in its own way. I just don’t understand who it was made for.

Why to watch Oliver!: The last of the great musicals from the classic era.
Why not to watch: It’s almost impossible to understand where the hell it comes from.