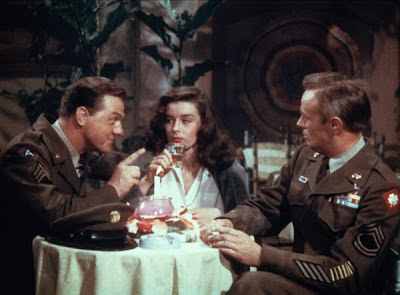 For most people, the best part of a film like Full Metal Jacket is the first half, the part concerning basic training. I’m not sure what it is about training sequences that we find so fascinating, but there is no doubt that we do. Take the High Ground! is that sort of film; we start with a collection of misfit, ragtag recruits and a little more than 90 minute later, we leave with a platoon of well-trained men thanks to the efforts of our tough-as-nails drill sergeant.

The drill sergeant in question is the awesomely named Thorne Ryan (Richard Widmark), who is almost a caricature of what a drill sergeant is. Ryan wants nothing more than a transfer to the shooting war in Korea but is stuck training raw recruits with the assistance of Sergeant Laverne Holt (Karl Malden). While the traditional drill sergeant puts on an act of hating the men under his command, Ryan seems to genuinely hate them while Holt is far more willing to give the men a little leeway when they need it.

The men, naturally enough, hate Thorne with a passion. They are a pretty typical collection direct from Central Casting. There’s a guy from Texas, an intellectual who quotes poetry, and a troublemaker (Russ Tamblyn) who is really the only memorable one of the bunch. They aren’t really supposed to be more than two-dimensional, though. They are the lens through which we see Ryan, not the focus of the film itself. They’re comfortable stereotypes that, through their familiarity, allow us to better understand Sergeant Thorne Ryan.

While Ryan and Holt initially clash over the treatment of the men, that’s not the real source of their conflict. No, the real issues are Ryan’s desire for a transfer to the front and their confrontations with Julie Mollison (Elaine Stewart). They run into Julie a number of times, and it’s evident that both men are attracted to her. Holt is not troubled by his obvious attraction to a beautiful woman, but Ryan seems to be bothered by this. In part, he is bothered by their first meeting when she was blindingly drunk. He’s also troubled when he discovers from Sergeant Vince Opperman (Bert Freed) that she is the widow of a soldier who she left while he was in Korea. And mostly he’s troubled by the fact that he is attracted to her despite all of this.

And really, that’s the whole movie. The men turn into soldiers and Thorne Ryan learns to be a man in a different way. A lot of this film seems to be almost naturally scripted—much of what is going to happen we know before we see it. But it’s also a smart enough script that it throws some curves, particularly in the end. It’s no shock that Ryan and Holt will end up on the same page again. It’s no shock that the men, through their standard complains and troubles (one man wants to desert, another wants to kill Ryan in cold blood, Russ Tamblyn won’t shut up) all make it through their 16 weeks of basic and make Ryan proud by the time the credits roll. But there are some genuine surprises, particularly in what happens with Julie.

Richard Widmark is the main, really the only, reason to watch this. Films about this sort of thing—it follows a plot not too different from most movies of this sort, and not too different in a lot of respects from many sports movies where a team of misfits bands together under the tutelage of their curmudgeon of a coach. So it really is Widmark’s film to make or break, and everything really rests on his performance.

I tend to get a Frank Sinatra vibe from Richard Widmark, like Sinatra could step into one of Widmark’s roles (and vice versa) without much change. That was especially true here. This really felt like Sinatra could have played this part without a lot of effort on his part. Given my fascination with Sinatra as a dramatic actor, this is not meant to disparage Widmark.

This is probably too jingoistic and nationalistic to really warrant a great deal of attention these days, but there were moments that actually surprised me, and I like that in a film. I especially like that in a film that's 60 years old.

Take the High Ground! isn’t amazingly impressive, but it’s not bad. It doesn’t strive to be anything more than it is, and in a way that’s reason enough to be impressed with it.

Why to watch Take the High Ground : Richard Widmark is a badass.
Why not to watch: Because of when it was made, there’s too much sap toward the end.