Film: The Great Ziegfeld
Format: DVD from NetFlix on laptop. 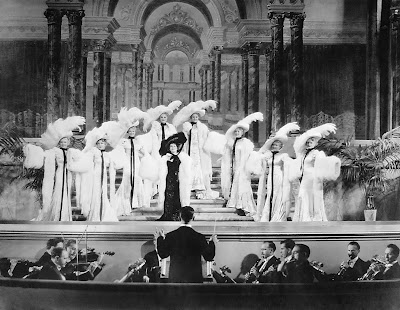 I haven’t heard a great deal of enthusiasm for The Great Ziegfeld, the winner for Best Picture in 1936. Because of this, I can’t admit to going into it with a great deal of excitement. That lack of excitement cooled even further when I realized that it clocks in somewhere north of three hours. This was countered by the realization that it stars William Powell and features an appearance from Myrna Loy. I like Powell and I like Loy, and I particularly like them together, so I had hope. I didn’t realize that Myrna Loy doesn’t show up until well into the final hour of the film.

This is the story of Florenz Ziegfeld, Jr. (William Powell), the frequently-broke Broadway impresario. We go from the start of his career as a carnival barker through his hit and failed shows and his tremendous ups and downs, his two great romances, his failures, his triumphs, and his eventual death. A lot of what we see are bits and pieces of the shows he put on—we get a ton of musical numbers to show us exactly where his money was going and to show us why he was considered a great showman. It would be unfair to suggest that these numbers are a waste of time. There’s some great spectacle with some of them, and just after the intermission, we get Ray Bolger’s first feature film dance performance that is truly one of the great comedy dance routines ever created.

In fact, and it seems strange for me to be the one saying this, the song and dance numbers are genuinely the best part of the film. The reason for this is that The Great Ziegfeld is pretty thin on plot. He steals acts from his best enemy Billings (Frank Morgan). In particular, he steals Anna Held (Luise Rainer) and the seals the deal by marrying her. There’s friction between the couple when he conceives of the Ziegfeld Follies as a show that will not feature her on stage. And while he makes money hand over fist, he also spends more than he makes, so a great deal of the film is spent watching him dealing with and not caring about massive and mounting debts.

Eventually, the rampant alcoholism of his potential star Audrey Dane (Virginia Bruce) puts him in a compromising position with Anna, who divorces him. And that’s par for the course here—Anna is such a diva that no one can tell her anything. I’m not entirely sure how much sympathy we’re supposed to have for her, but I have none. She’s flighty and wishy-washy, and these are not characteristics that engender a great deal of empathy from me. After the divorce, Powell meets and hires Billy Burke (Myrna Loy) and eventually marries her.

I find it difficult to conceive of William Powell not being entertaining or ridiculously charming in just about anything. It was his character and his nature. But here, he’s such a creep. If this is an accurate portrayal of Ziegfeld, then Flo Ziegfeld was an opportunist and a heel. With main characters this regularly unpleasant, it’s difficult to want to spend any time with them, let alone three hours.

More importantly, having just seen the film, I’m challenged to think of a lot of specifics about it beyond Powell playing a showman version of Nick Charles with less alcohol and significantly more balls. Most of the characters don’t leave a great deal of impression, and those who do leave an almost universally negative one. I, who tend toward ambivalence to musicals at best, started wishing for more musical numbers if only as a respite from the characters. That’s just not a good thing to have to say.

As with Cavalcade yesterday, I’ve seen Best Pictures I’ve liked a lot worse than The Great Ziegfeld. What this needed more than anything was to have someone go in and chop it down into something easier to handle. The problem is that the most obvious cuts are the different show numbers, and those are not only the best parts, they are frequently the parts most worth watching. Ziegfeld himself isn’t much of character, and even after spending this much time with him, we don’t know that much about him. In a sense, this is a film about the spectacle rather than what made the spectacle happen. It’s far too much buttercream frosting and sparklers and not nearly enough of what makes that stuff go.

Why to watch The Great Ziegfeld: William Powell is always worth your time.
Why not to watch: The best parts are the parts that most need to be cut for the story.