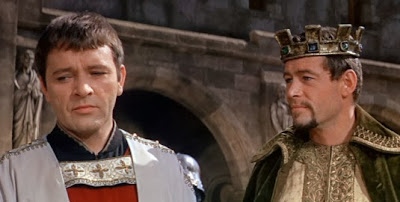 I’m never really sure how to react to substantially religious epics. It’s always interesting to see someone willing to die for the courage of his or her conviction, but when that conviction is something I find so nebulous, I can’t help but ponder what I see as the waste of a life. That’s certainly the case with Becket, a story of warring ideologies and conflicted devotions. Admittedly, this is less a religious epic and more of a film about those divided loyalties and about perceived betrayal, but when so much of the film takes place inside a church and in characters wearing ecclesiastical garb, it’s difficult not to consider the intense religious overtones of the film.

What Becket really is at its core is the story of a friendship gone bad. The difference between a typical story of such a friendship and this one is that Becket concerns men at the height of temporal power. The two men in question are Thomas Becket (Richard Burton) and King Henry II (Peter O’Toole). The friendship is an interesting one. Henry is the heir of William the Conqueror, and thus a Norman in a still-hostile land filled with Saxon peasants. Becket is a Saxon raised to nobility by Henry. This leaves him in a very real sense as a man without a place to go. The other nobles hate him because he is a Saxon and the Saxons hate him because they believe he has willingly betrayed them for his position. This only becomes more the thought on all sides when Henry names him Lord Chancellor.

While the two quarrel at times, particularly over women (and one woman in particular), Becket remains loyal and works as best he can on behalf of Henry. One place where his advice is invaluable is in Henry’s conflicts with the Church. While Henry is busy debauching himself, Thomas learns that there is a shift in power coming, with the Archbishop of Canterbury (Felix Aylmer) looking to make a power play against the king. However, the archbishop dies, and in a burst of inspiration, Henry names Thomas Becket as his successor. This causes an uproar, particularly in the person of the Bishop of London (Donald Wolfit).

It is not long before the mantle of the two jobs becomes too much. When one of the king’s nobles arrests and then kills a priest, Thomas is moved to act. He renounces the chancellorship and excommunicates the noble, setting up a grand power play between himself, Henry, the ambitious bishop and the King of France (John Gielgud). While Henry continues to maneuver against his former friend, he also descends into drink, mourning the loss of his friendship and the only person who was really close to him.

Becket is the sort of a film that one needs to watch while fully awake. It’s not that it’s dull, but it is very cerebral. Much of what happens does so on a very high level, meaning that careful attention needs to be paid to dialogue. In many ways it presages a film like A Man for All Seasons, which has many of the same ideas behind it, a number of similar conflicts and betrayed loyalties, and eventual intrigues against a former friend and confidant of a king named Henry.

Everything in this film turns on the performances of the two stars. Without Peter O’Toole and Richard Burton both at the top of their form, this is a non-starter of a film. It’s too overblown and dramatic for things to be otherwise. We need to see two men capable not only of the bombast required for these roles, but also capable of the subtlety and nuance needed to play the roles believably. These are both fine performances, ranking among the best of both men’s careers, and it’s not for nothing that both were nominated for Best Actor for this film.

If there is a fault here, it’s the length. Becket has no real need to be nearly 2 1/2 hours long, and there's probably a good half hour that could be trimmed here and there. Even this, though, is small reason to not watch two actors who were seldom this good and never better truly tearing up the screen in pursuit of this story.

Why to watch Becket: Two great performances from actors at the top of their game.
Why not to watch: It’s too long for the story.